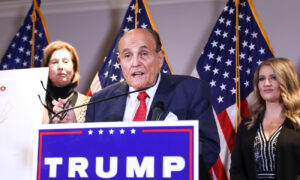 Mike Lindell, CEO of MyPillow, speaks during a rally on the National Mall in Washington on Dec. 12, 2020. (Samira Bouaou/The Epoch Times)
Politics

Dominion Voting Systems filed a lawsuit on Feb. 22 against MyPillow CEO Mike Lindell over his statements about the election technology vendor after the Nov. 3 presidential election.

The lawsuit, filed in the District of Columbia, alleges that Lindell, a staunch supporter of former President Donald Trump, harmed Dominion’s brand by raising questions about the company’s vote-counting equipment. The company is seeking damages in excess of $1.3 billion.

“Instead of retracting his lies, Lindell—a multimillionaire with a nearly unlimited ability to broadcast his preferred messages on conservative media—whined that he was being ‘censored’ and ‘attacked’ and produced a ‘docu-movie’ featuring shady characters and fake documents sourced from dark corners of the internet,” the lawsuit states, referring to a video produced by Lindell that he released on several platforms, including his own website.

Dominion, in its suit, claimed that Lindell was able to sell more MyPillow products due to his claims. But Lindell, in an interview with Business Insider, said that he lost about $65 million in revenue this year due to mass boycotts from various firms like Kohl’s and Bed Bath & Beyond.

“I lost 20 retailers, and it’s cost me $65 million this year that I won’t get back, OK?” Lindell told Insider. “There’s your story. Print it right. Don’t try and twist this,” he told the outlet.

And in an interview with the Wall Street Journal on Feb. 22, Lindell said he was “very, very happy” about the lawsuit.

Last week, Lindell told the Daily Beast that he wanted Dominion to file a lawsuit against him because he could obtain evidence via discovery.

“That would so make my day because then they would have to go into discovery, and that would make my job a lot easier,” he said.

However, Dominion in its filing said that via discovery, the firm “will prove that there is no real evidence” regarding claims about the Nov. 3 election.

After Lindell’s video was released, a spokesperson for Dominion, Michael Steel, told news outlets weeks ago that Lindell was “begging to be sued.”

Dominion has also filed separate lawsuits against former Trump lawyer and former New York City Mayor Rudy Giuliani as well as Sidney Powell, who filed third-party lawsuits related to the Nov. 3 election. The firm is seeking $1.3 billion each from them.

Giuliani said that Dominion’s lawsuit was an “act of intimidation” to “censor the exercise of free speech.” Powell also condemned the lawsuit.

Lindell and his MyPillow account were suspended by Twitter several weeks ago over his election claims. When Lindell released his video on YouTube, the Google-owned platform deleted it. Vimeo also took down the video.

“Per our presidential election integrity policy, we remove content uploaded after the safe-harbor deadline” that includes claims that “fraud, errors or glitches changed the outcome of the 2020 U.S. presidential election,” YouTube spokesperson Alex Joseph told The Washington Times and other news outlets on Feb. 6. “We removed this video and its reuploads in accordance with this policy.”