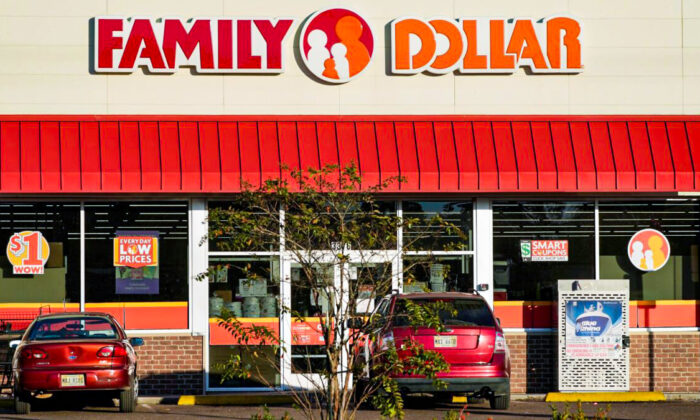 The Family Dollar logo is centered above one of its variety stores in Canton, Miss., on Nov. 12, 2020. (Rogelio V. Solis/AP Photo)
US News

Dollar stores across the United States and Canada are selling products that contain a large number of toxic chemicals, including children’s toys, according to a new study published on April 12.

The study was conducted by the consumer advocacy group, Campaign for Healthier Solutions, and focused on all of the leading dollar store retailers in the United States and Canada: Dollar Tree, Family Dollar, Dollar General, Five Below, and 99 Cents Only Stores.

It found that more than half of the items purchased by researchers at the stores contained one or more chemicals of concern.

At the start of 2021, researchers bought 226 products from stores across the states of Michigan, Pennsylvania, California, New Mexico, Washington, Maine, and Texas in the United States and Ontario in Canada. In total, the products contained 635 unique components or materials.

The products were then tested using various methods depending on the typical chemicals of concern for that specific product type.

In total, researchers found that more than half (53 percent) of the products screened had one or more “chemicals of concern” that are hazardous.

This included canned food goods which contained toxic interior can coatings, including BPA-based epoxy, a type of polymer, and PVC can body coatings, and microwave popcorn products of which 100 percent of the contents tested positive for PFAS coatings, which are typically applied to metal to prevent it from corroding, among other things.

Researchers also found products in the dollar stores that were made with flexible PVC which had “banned, regulated or inadequately studied plasticizers”, consumer electronics with lead solder, flame retardants, and phthalate plasticizers, and a number of products containing other “chemicals of concern” including antimony compounds, organotins, and bromine, which is corrosive to human tissue, according to the Centers for Disease Control and Prevention (CDC).

More alarmingly, researchers discovered the presence of toxic metals, endocrine disruptors, and other harmful chemicals in children’s toys at the stores.

One such product included a musical car toy sold at Dollar Tree in Texas which had 174,000 parts per million of lead, another item, a toy pair of lips sold at Dollar General in California was made with polyvinyl chloride (PVC), a major source of phthalates; a group of chemicals used to make plastic items such as packaging, garden hoses, and medical tubing more durable.

While it is not yet clear what the long-term effects of exposure to phthalates are, a 2021 study found that they can be “detrimental to the reproductive, neurological, and developmental systems of humans from multiple exposure pathways.”

Furthermore, the study found that children are at a higher risk of exposure and are more vulnerable to phthalates.

Another product purchased at a Five Below store in Maine, Disney-themed headphones, contained TDCIPP (chlorinated tris) flame retardant in the earphone foam, and 656,000 parts per million of lead in solder.

TDCIPP exposure can increase the risk of cancer in humans.

Even receipts from the stores were tested by researchers and were found to contain “chemicals of concern”, including bisphenol S, which has been found to disrupt hormones in humans.

“As a parent, I should be able to buy a product without expecting to poison my child,” José Bravo, national coordinator at the Campaign for Healthier Solutions, told The Guardian.

The study comes as the dollar store industry continues to rapidly expand throughout the United States, and at a time when the country is battling historic levels of inflation.

“Many families rely on dollar stores for affordable toys and other products for kids,” Bravo, said in a statement. “With their high-profit margins, dollar stores must do more to ensure that all of these products are safe.

Randy Guiler, vice president for investor relations at Dollar Tree, which also owns Family Dollar, told E&E News: “The safety of our product is a key priority for us. Our products are tested to ensure compliance with all federal and state requirements, and our testing protocols are in place to check for regulated standards.”

The Epoch Times has contacted spokespersons for Dollar General, Five Below, and 99 Cents Only Stores.