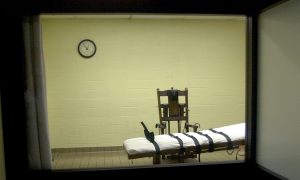 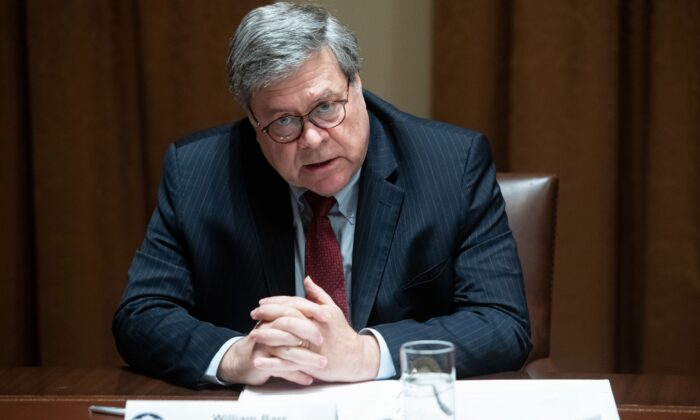 Attorney General William Barr speaks during a roundtable meeting on seniors with President Donald Trump in the Cabinet Room at the White House on June 15, 2020. (Saul Loeb/AFP via Getty Images)
US News

Attorney General William Barr on June 15 ordered the Federal Bureau of Prisons to schedule the executions of four death row inmates convicted of killing children, according to the Department of Justice (DOJ).

Barr asked that the execution dates be set for July and August, marking the first use of capital punishment by the federal government since 2003, the DOJ said in a statement. Two of the four death row inmates convicted of killing children were also convicted of raping the children they murdered, the Justice Department said.

It follows an announcement from Barr in July 2019 that federal executions would resume. In early April, the U.S. Court of Appeals for the District of Columbia Circuit ruled that the Trump administration’s plan to resume executions of federal death row prisoners via lethal injection doesn’t violate federal law.

The appeals court lifted an order in November 2019 by a lower court judge that had put on hold the executions of the four federal death-row inmates—Daniel Lewis Lee, Wesley Ira Purkey, Dustin Lee Honken, and Keith Dwayne Nelson.

Attorneys for the four men are asking the Supreme Court to order a halt to the process.

The third inmate, Dustin Lee Honken, has had his execution scheduled for July 17 over the fatal shooting of five people—a mother and her daughters, aged 10 and 6, and two of his victims who had planned to testify against him.

“The American people, acting through Congress and presidents of both political parties, have long instructed that defendants convicted of the most heinous crimes should be subject to a sentence of death,” Barr said in a statement.

“The four murderers whose executions are scheduled today have received full and fair proceedings under our Constitution and laws,” he added. “We owe it to the victims of these horrific crimes, and to the families left behind, to carry forward the sentence imposed by our justice system.”

Executions on the federal level have been rare, and the government has put to death only three defendants since restoring the federal death penalty in 1988—most recently in 2003, when Louis Jones was executed for the 1995 kidnapping, rape, and murder of a young female soldier. Though there hasn’t been a federal execution since 2003, the Justice Department has continued to approve death penalty prosecutions, and federal courts have sentenced defendants to death.

Attorneys for the inmates decried the DOJ’s decision to move ahead with the executions.

In an emailed statement, Ruth Friedman, a lawyer for Daniel Lee, argued that the lead prosecutor and the victims’ family all oppose his execution “and believe a life sentence is appropriate.”

Friedman said the government relied on “junk science and false evidence” in his case and said he is trying to get a court to consider problems in his case. A federal judge denied Lee’s request for a new trial but noted that evidence presented by his attorneys “is reasonably likely” to have led to a different sentence.

“Given all of these circumstances, it would be unconscionable for the government to execute Danny Lee,” Friedman said.

The mother of one of Lee’s victims, Earlene Peterson, said in a video posted online that she doesn’t see how his execution will “honor” her daughter “in any way.”

“In fact, kind of like it dirties her name because she wouldn’t want it, and I don’t want it,” Peterson said.

Purkey’s attorney, Rebecca Woodman, said he suffers from schizophrenia, Alzheimer’s disease, dementia, and “no longer has any rational understanding of why the government plans to execute him.”

“No execution should proceed unless and until the question of Wes’s competency is resolved,” Woodman said in an emailed statement.

Shawn Nolan, attorney for Honken, noted that his client’s trial was “plagued by misconduct and the ineffectiveness of counsel” who failed to “adequately inform” Honken’s jury of his “severely dysfunctional background” and mental health problems.