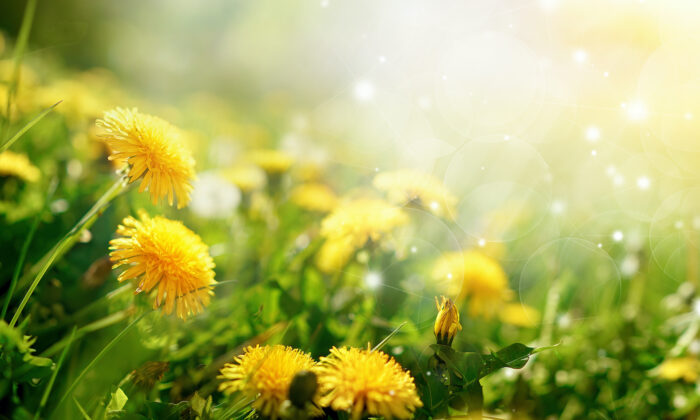 Every part of the dandelion is edible and now researchers are discovering it may help treat COVID-19.(LedyX/Shutterstock)
Health

Dandelions Versus COVID-19 and Other Diseases

Dandelion may seem like a troublesome weed, but researchers are studying it as a treatment for a variety of ailments and diseases—and now that includes evaluating its effects on the COVID-19 virus.

A study out this past spring in the journal Pharmaceuticals explored how the plant interacted with SARS-CoV-2 virus variants.

They didn’t test this in humans, though—only in vitro (in a test tube).

But they do believe the positive results should “encourage” more research on the relevance and practicality of dandelion extract as a preventative strategy.

Exploring Dandelion and the COVID-19 Virus

The variants contained numerous mutations in the virus’s spike protein’s Angiotensin-Converting Enzyme 2 (ACE2) receptor recognition site in comparison to the original virus. The spike protein of the virus is what lets it bind to ACE2, a protein in human cells.

A team looked at whether common dandelion (the scientific name is Taraxacum officinale) could block the interaction of the virus’s spike protein to the human ACE2 receptor. They found that it did so in various mutations, including the Delta variant. It wasn’t tested on the Omicron variant.

Research has shown that disrupting the interaction between the spike S1 subunit and ACE2 could be a target for therapy or prevention. The S1 subunit is one of two types of proteins on the virus—the other is S2.

The Potential of Dandelion

Siyaram Pandey, a biochemistry professor at the University of Windsor who has researched the anti-cancer effects of dandelion root extract, told The Epoch Times that there are compounds in dandelion that may have health benefits.

“Dandelion root extracts do have many natural compounds that may have specific anti-viral activities,” Pandey said.

In the world of herbal medicine and preventative treatments, dandelion isn’t a pesky weed at all. Many people do ingest dandelion greens raw, though they can be cooked, too. Several dandelion extract products are on the market. People also consume the plant by preparing it as dandelion tea.

The plant has been used to treat everything from acne to cancer, as well as digestive issues and liver disease. More recently, research has looked at its anti-inflammatory properties. It’s been studied with respect to the flu, diabetes, and HIV.

Dandelion contains vitamins A, C, and K, and also includes folate and some B vitamins. It also contains iron, calcium, magnesium, and potassium. The plant is also full of antioxidants beta-carotene and polyphenols.

What’s Next for Dandelion?

A lot of the research on dandelion has been done in animals or in laboratory settings, so there’s not much data to confirm the benefits to humans.

Pandey noted that he isn’t an expert in ACE or the anti-viral effects of the natural extract, and isn’t a medical professional, so he couldn’t provide suggestions for human intake—or if people should take it as a possible way to prevent getting COVID-19.

“The research is exciting, but more work needs to be done,” Pandey said.