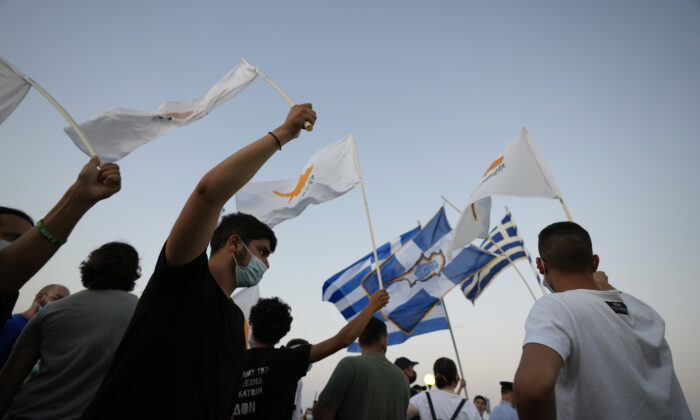 Residents of Varosha or Famagusta, abandoned city, hold Cyprus and Greek flags during a protest against the Turkish President visiting the Turkish occupied part of the island at the north and the 47th anniversary against the Turkish invasion in the island, in Dherynia, Cyprus, on July 19, 2021. (Petros Karadjias/AP Photo)
Europe

PARALIMNI, Cyprus—The government of ethnically split Cyprus lodged formal protests with the United Nations and the European Union on Tuesday over a decision by Turkey and breakaway Turkish Cypriots to reopen a residential section of an abandoned, military-controlled suburb.

Calling the move a veiled bid to acquire more territory that could scuttle peace efforts, the government said the five permanent U.N. Security Council members would be informed about what President Nicos Anastasiades called a contravention of council resolutions prohibiting any change to the coastal area’s status and which call for the return of Varosha to its legal inhabitants.

Turkish Cypriot leader Ersin Tatar announced earlier Tuesday that a 3.5 square-kilometer (1.35 square-mile) section of Varosha would revert from military to civilian control so Greek Cypriots could seek to reclaim their properties through the Immoveable Property Commission (IPC), a legal body that is empowered to adjudicate such cases.

Tatar made the announcement ahead of a military parade attended by Turkish President Recep Tayyip Erdogan to commemorate the 47th anniversary of a Turkish invasion that followed a coup on Cyprus aimed at union with Greece. Only Turkey recognizes a Turkish Cypriot declaration of independence, and Erdogan’s government keeps more than 35,000 troops in northern Cyprus.

The island’s internationally recognized government is in the south. Both Erdogan and Tatar have said that a permanent peace in Cyprus can only come through the international community’s recognition of two separate states, upending decades of negotiations to reach a federation-based reunification accord.

The European Union’s foreign policy chief, Josep Borrell, said in a statement Tuesday that the EU still sees reunification as the goal and supports the involvement of the Security Council. Cyprus is an EU member, and Turkey is not.

“The EU remains fully committed to the comprehensive settlement of the Cyprus problem on the basis of a bi-zonal, bi-communal federation with political equality, in accordance with the relevant UNSC Resolutions and in line with the principles on which the EU is founded and expects the same of Turkey,” Borrell said.

The United States condemned the announcement by Tatar and Erdogan, saying that the United States “views Turkish Cypriot actions in Varosha, with the support of Turkey, as provocative, unacceptable and incompatible with their past commitments to engage constructively in settlement talks.”

In a statement, Secretary of State Antony Blinken urged Turkish Cypriots and Turkey to reverse the decision. “The United States is working with like-minded partners to refer this concerning situation to the UN Security Council and will urge a strong response,” he said.

Some Greek Cypriot lawyers have urged owners to apply to the European Court of Human Rights-endorsed IPC to legally affirm rights to their property in the north.

But the Cyprus government worries that an application rush to the IPC could lead to a mass property sell-off that Turkish Cypriots would exploit politically to entrench ethnic division and lend legitimacy to their breakaway state.

Varosha is a suburb of Famagusta, a city that was Cyprus’ pre-1974 tourism hub thanks to its pristine beaches and modern hotels. After Varosha’s 15,000 Greek Cypriot residents fled in the face of advancing Turkish troops, the area was fenced-off to prevent any access until last year when Turkish and Turkish Cypriot authorities announced its “re-opening.”

Varosha’s former residents denounced the move as a bid to take advantage of their desperation over the area’s future and to psychologically pressure them into selling off their properties. Many Turkish Cypriots also condemned the move as undermining ongoing efforts at reconciliation between the two communities.

Famagusta Mayor Simos Ioannou told the Associated Press that Tuesday’s announcement aimed to test Greek Cypriots’ resolve about holding on to their properties. The fact that only a small section and not the whole of residential Varosha was re-opened intends to blunt international reaction to the move, Ioannou said.