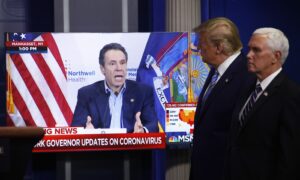 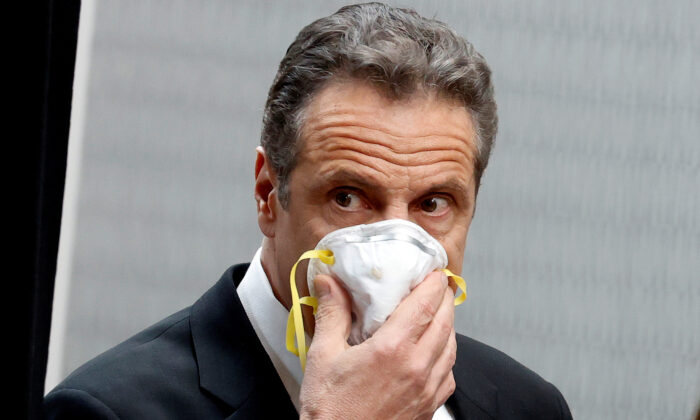 New York Governor Andrew Cuomo holds a protective mask to his face as he arrives for a daily briefing at New York Medical College in Valhalla, N.Y., on May 7, 2020. (Mike Segar/Reuters)
NY News

New York Gov. Andrew Cuomo said Wednesday that New York City’s bars and restaurants may shutter again this fall when dropping temperatures force the closure of patios and outdoor dining arrangements, with a high number of COVID-19 violations in the city reducing the likelihood of a resumption of indoor dining, according to reports.

Cuomo told reporters on a briefing call that there was far more flouting of restrictions meant to curb the spread of the Chinese Communist Party (CCP) virus in New York City than in other parts of the state which have moved into the final phase of reopening.

“We have a much, much bigger problem in New York City today than any of the surrounding suburbs with a lack of compliance,” Cuomo said, Forbes reports.

Cuomo’s warning came as his office announced that on Tuesday, the State Liquor Authority and State Police Task Force found five establishments out of 1,077 inspected in New York City and Long Island that were not in compliance with state requirements.

Indoor dining has resumed in all of New York state except in the Big Apple, whose residents are still confined to spaces like sidewalks and parking lots adapted for dining out.

On the call, Cuomo acknowledged that “many businesses are under economic hardship” because of the restrictions and that they feel “they are going to have issues” unless they can resume operating normally.

Around 83 percent of New York City restaurants were unable to make their full rent in July, The New York City Hospitality Alliance said in a tweet Wednesday. The trade group has demanded that city and state authorities provide a timeline for the resumption of indoor dining.

“Today is DAY 45 without a plan of when to reopen indoor dining, even after meeting the same metrics as the rest of the state,” the Alliance said.

While the group says it wants to work with authorities on a plan to resume normal operation, it is ready to do battle in court.

“We are hoping to work collaboratively, however ‘When others sue they get a plan and they get a date,'” the group said.

Asked about the group’s demands for a reopening plan, Cuomo was cited by NBC New York as saying: “Now, they are right, the weather is going to start to get cold: what are we going to do if it’s cold and people don’t want to eat outside? I get it. Again, that’s in the fall, and today in this environment, two weeks is what a year used to be, right? Everything changes every two weeks.”

On Wednesday, Cuomo’s office announced that for the 12th consecutive day, New York State’s rate of positive tests was below 1 percent. Of the 80,425 tests reported Tuesday in New York State, 631 were positive, amounting to a positivity rate of 0.78 percent.

“We went from one of the worst situations in the nation to the best, all thanks to the hard work of New Yorkers and our data-driven, phased reopening,” Cuomo said in a statement. “The reason we’re doing well is because we’re being smart. If people’s behavior doesn’t remain disciplined, we’re going to have a problem and you’ll see the numbers change.”

“COVID is NOT over. At best it’s half time. You don’t call it a win at half time no matter the score,” Cuomo said in a tweet.