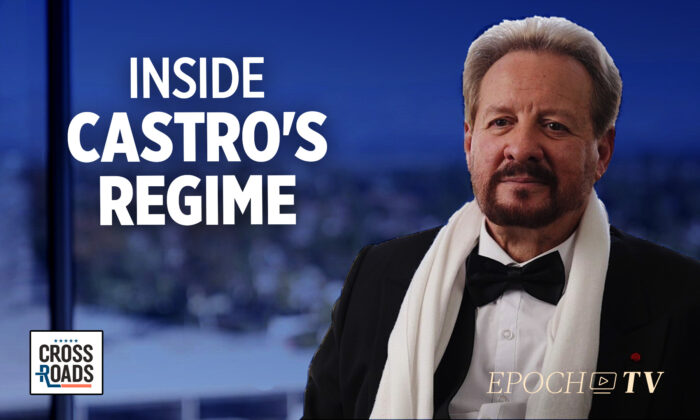 As a member of former Cuban leader Fidel Castro’s inner circle, Dr. Julio Antonio del Marmol had access to the most secret information of the regime’s plans and operations.

As the Cuban revolution began in 1959, del Marmol was introduced to Castro by his father, a passionate patriot who believed whole-heartedly in democratic values and equality.

Del Marmol’s father was not only ideologically committed to the Cuban revolution, which said it would be “democratic,” but also provided financial support to Castro’s regime.

Castro, impressed by young del Marmol who was only 11 years old at that time, nominated him to be the Commander-in-Chief of the Young Commandos of the Rebel Army, del Marmol told The Epoch Times’ Crossroads program.

Having had interacted with Castro and Che Guevara on a regular basis, del Marmol was taken one day to a secret meeting where the revolutionaries were preparing to take over all Cuban private industries and businesses, from communication and electrical companies to food stands on the streets.

Guevara had said in the meeting that a government take over of the entire economy was the only way for the revolution to retain power and control, del Marmol recalled. The only way to ensure that people will do what the government wants them to do “is to take away their bread and butter,” Guevara had said.

Del Marmol quickly realized that the planned nationalization of Cuba’s economy would mean that his father, a businessman, would lose his life’s work, so he warned his father about the regime’s plans. But he said his father, dedicated to the cause, called him a traitor and drove him out of the family home.

Feeling down, del Marmol informed his uncle about the situation. But to his surprise, del Marmol, his uncle then revealed himself as a master spy working for the international intelligence community, including the CIA. That was when del Marmol joined his uncle’s spy network to become a brilliant, successful spy countering the communist oppression of Cuba. He was also the most hunted in Cuba.

“I came to be an intelligence source to the West, so powerful that I sent the fresh pictures from the fresh missiles that Russia put in Cuba,” del Marmol said. This accomplishment was so unbelievable that it took the intelligence community months to validate the information he had provided.

Plans to Conquer US Without Firing a Single Bullet

Del Marmol revealed during the interview that Castro and his close ally, Che Guevara, made plans to subvert and gain control of the United States, much of which is still playing out today.

“The United States represented to them a mortal enemy, because [the United States] is a mecca to democracy and the capitalist world,” del Marmol explained, adding that the socialists believed that if they could take over America, they could control the world.

Their strategy was to slowly penetrate America’s most powerful agencies, such as the State Department, the CIA, and the FBI given they acted as the pillars of democracy, del Marmol said.

He added that Cuba has been the biggest sponsor of terrorism in the world. It harbors terrorists, manufactures terrorism, finances, and exports terrorism, he said.

Hijackers who took part in the 9/11 attack had been trained in a Cuban military base for almost a year before the attack, del Marmol revealed. Then they came to Florida for more “training” through the Canadian and Mexican borders to obtain pilot’s licenses, he said.

Financial support to terrorist operations sponsored by Cuba is now largely being provided by China, del Marmol said. He said this was made possible with the decision to incorporate a communist China into the world market, which was a big mistake.

In March, U.S. Representatives Bobby L. Rush (D-Ill.), Steve Cohen (D-Tenn.), Barbara Lee (D-Calif.), and Gwen Moore (D-Wis.) led a group of 75 Democratic representatives in sending a letter to President Biden urging him to repeal sanctions imposed on Cuba by the Trump administration and re-engage with Cuba, according to a statement.

The letter also urged Biden to repeal the designation of Cuba as a state sponsor of terrorism reinstated by the Trump administration in January.

White House Press Secretary Jen Psaki said at a press briefing in April that a Cuba policy shift “is currently not among the president’s top foreign policy priorities.”

“But it is an issue, of course, we will remain engaged in and focused on,” she added.

Removing the terrorist designation for Cuba will amount to taking the United States without firing a single bullet, which was Che Guevara’s plot from the beginning of the revolution, del Marmol said.

Undoing the terrorist designation and sanctions on Cuba is like releasing every criminal, every bad guy that the previous sheriff put in jail, the former secret agent said.

Cuba had been on the list of state sponsors of terrorism since 1982. But in 2015, the Obama Administration rescinded Cuba’s designation as part of its overall policy shift on Cuba, according to a Congressional Research Service report (pdf).

Che Guevara’s plan to conquer the United States was to first take over all countries in South and Central America through guerrilla warfare and convert them to socialism or communism to then infiltrate the United States, del Marmol told Crossroads.

Drugs and pornography would be then used to corrupt American youth.

Fidel Castro used to control the distribution of cocaine around the world, del Marmol said. The Cuban government’s planes and ships were used to transport huge loads of cocaine from Colombia to Panama because they had diplomatic immunity.

Cuba then used the money made from the illegal drug trades to purchase weapons, including weapons of mass destruction, he said.

Del Marmol claimed that nuclear missiles installed in Cuba by the Soviets in 1962, which were supposed to have been removed as a result of an agreement reached by President John F. Kennedy with then-Soviet leader Nikita Khrushchev, still remain in Cuba, which is why the country is still “holding the United States hostage.”

The United States also agreed to remove its nuclear missiles from Turkey in a separate agreement.

According to the National Security Archives, a non-governmental, independent research and archival institution, the last Soviet nuclear warheads left Cuba in December 1962. However, it is not clear whether tactical nuclear weapons not explicitly covered by the agreement between Kennedy and Khrushchev were also removed from Cuba, Svetlana Savranskaya, director at the National Security Archive, wrote (pdf).

U.S. officials were not aware of the presence of nuclear tactical weapons when the agreement was made, so it covered only “offensive weapons,” Savranskaya wrote for the Wilson Center. It would also be hard to argue that tactical nuclear weapons were offensive due to their short range, she explained.

The island of Cuba occupies a strategic location south of the United States and sits astride major shipping lanes for the Gulf of Mexico.

“Cuba is the key to the Gulf of Mexico, whoever controls Cuba controls all the American South and Central America,” del Marmol said.

After del Marmol’s espionage activity was discovered in 1971, the regime threatened they would kill his family if he did not leave Cuba within 72 hours. He said that was when he decided to escape Cuba, walking through minefields and swimming to the U.S. naval base at Guantanamo Bay.