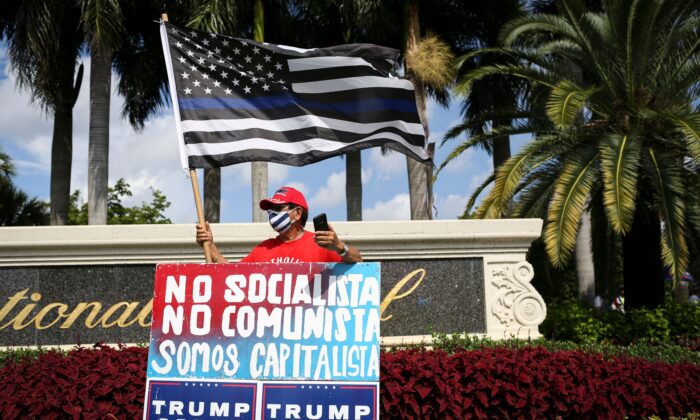 MIAMI—The creeping threat of socialism and communism is a key theme repeatedly brought up by Cuban American voters in Miami—a significant voting block—who say the issue remains one of their top concerns heading into the November election.

Nearly 2.7 million individuals make up the Cuban diaspora in the United States, including those born in Cuba and those who report Cuban ancestry, according to the Census Bureau’s 2018 American Community Survey. While Cubans live all across the United States, about 77 percent reside in the Sunshine State.

The Epoch Times spoke to nearly three dozen Hispanic voters in Miami, the majority of whom are Cubans, as well as a small number of Venezuelans and Colombians. An overwhelming majority said they would vote for President Donald Trump, citing his hardline stance against communist regimes that some older voters had escaped.

The Trump campaign has been courting Cuban Americans in Florida through advertisements and other means, including a “Latinos for Trump” event hosted by Trump himself at his hotel in Miami on Sept. 25. Democrats, meanwhile, have expressed concern that their presidential candidate, Joe Biden, is rapidly losing ground among Cubans.

A number of polls favor Trump on this front, with one recent NBC News/Marist poll revealing that 50 percent of likely Latino voters of Cuban descent favor Trump, compared to 46 percent for Biden.

Rey Anthony, a third-generation Cuban American and co-chair of the Cuban American Republicans of Florida, said that for many in the city, the election is personal. Anthony’s grandparents fled the communist dictatorship of Fidel Castro’s Cuba in search of freedom.

“I would be ignorant and disrespectful to [my grandparents] if I didn’t recognize that and value the freedom that we have in this country,” Anthony told The Epoch Times. “They sacrificed everything so that my parents, my generation, could live in freedom and not have to go through the horrors that so many people in Cuba today still go through.”

Born and raised in Miami, Anthony says that when people ask him who his heroes were when he was younger, he would answer easily that they were his grandparents.

“They really did something that I don’t know if a lot of people have the courage to do, which is to get on a boat—not knowing if you’re going to arrive or not—in search of freedom,” he said. “How could we ever forget that?”

According to Anthony, his community is turned off by what he described as a “hijacking” of the Democrat Party by politicians such as Rep. Alexandria Ocasio-Cortez (D-N.Y.), who is a member of the Democratic Socialists of America. He said that he and others in the Cuban community support Trump’s sanctions against the Cuban regime.

Cuban cigar shops, restaurants, and cafes line the streets of Miami’s Little Havana, regarded as the Cuban heart of the city. Many living in the community are expatriates from Cuba.

The streets are filled with bright Latin American street art and thousands of Cuban Americans who call the neighborhood home.

At Versailles, an iconic Cuban restaurant nestled inside Little Havana, dozens of patrons told The Epoch Times that they would never vote for a Democrat, regardless of who was the candidate. Virtually all of the patrons also said that they would be voting in person, rather than by mail, noting that they didn’t trust the mail-in system.

A handful of patrons said they would be voting for Biden, the reason being generally that they believe Trump’s character makes him unfit for office.

Miles away from Versailles, Jorge Monteagudo, the owner of Jorge’s Pharmacy, a family-owned business that has served the Cuban community for more than 45 years, said that as a business owner himself he supports Trump’s law-and-order message, referring to the widespread riots taking place across the United States.

Monteagudo, who was born in Cuba, said he fears the United States turning into Cuba due to the Democratic Party’s further shift to the left.

“Who is going to pay for all of it?” he told The Epoch Times, referring to those who push for socialism in the United States.

The top four counties in the United States with the highest concentration of Cubans are all in the state of Florida—Miami-Dade, Broward, Hillsborough, and Palm Beach—according to the Migration Policy Institute. Florida, which counts for 29 electoral votes, is a key battleground state.

Barbara Lopez, a second-generation Cuban American who is Monteagudo’s daughter, told The Epoch Times that while the older generations in the community tend to be more conservative, those in the younger generation are more mixed.

Lopez has American friends who support socialism and politicians such as Sen. Bernie Sanders (I-Vt.). She believes they have been heavily influenced by liberal professors and teachers at U.S. colleges and the nation’s public schools. Her friends send her articles that tout the advantages of socialism and about topics that include “equal distribution” and “taxing the rich.”

She said she’s afraid to post anything about politics on social media.

“To me, they are blinded,” she said. “They see what happened with their parents’ country and how Cuba is, with the buildings deteriorating, but they don’t want to recognize that.”

The Trump administration’s campaign is resonating among many older Cuban Americans. In one advertisement, it shows Biden saying himself that he is going to be one of “the most progressive presidents in American history.”

When residents found out that Trump would be in Miami on Sept. 25 to attend a Latina roundtable at his hotel in Doral, supporters of both parties flocked to his property.

About 20 Biden supporters gathered at one side of the street, with about 40 Trump supporters on the other side facing them. Both sides received honks of support from passing drivers.

Alex Gubanos, a Cuban American, told The Epoch Times he’s voting for Trump because the Paycheck Protection Program (PPP) loan he received greatly benefited his business of about 600 employees.

“Democrats didn’t want to give us the money,” Gubanos said, adding that Trump “is implementing a lot of policies that benefit all Americans.”

Gubanos says he “100 percent” supports the sanctions against Cuba by the administration, adding that he has family living there. According to what he has seen, he says most Cuban Americans around him are voting for Trump.

Days before visiting Miami, Trump added new sanctions against the regime in Havana, including new restrictions on Cuban exports and the barring of Americans from staying at regime-owned properties. Trump said the sanctions are part of “our continuing fight against communist oppression.”