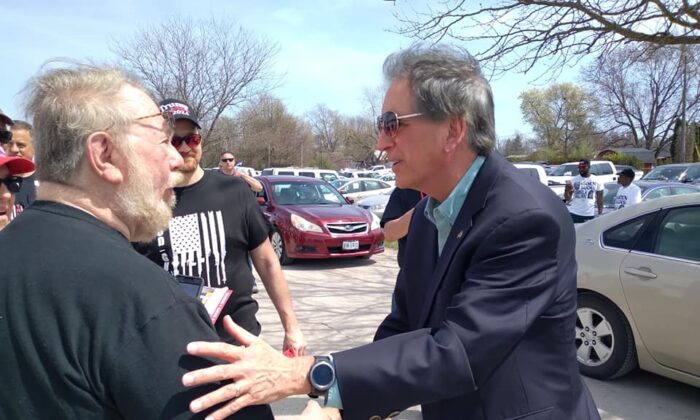 Jim Renacci (R) was one of five Republican candidates to challenge incumbent Gov. Mike DeWine in the Ohio’s May 3 GOP gubernatorial primary in which more than 56 percent of 1 million ballots cast came from Democrats and Independents, fostering a call from state conservatives to close the state’s open primary system. (Michael Sakal/The Epoch Times)
2022 Midterm Elections

Conservatives in 9 States Call for Closed Primaries by 2024

Conservative leaders in Georgia and Ohio are spearheading calls for Republicans to close their state primaries and allow only voters registered with their parties to participate in inter-party preliminary elections.

Atlanta Tea Party co-founder and President Debbie Dooley and Ohio Republican gubernatorial candidate Jim Renacci both told The Epoch Times that Democrats are “weaponizing” crossover voting to skew outcomes in key GOP primaries across the country either to ensure the election of moderates or to nominate candidates unlikely to be successful in a general election.

Dooley, Renacci, and other conservatives are calling on Republican lawmakers in their states to close primaries to only those registered with parties.

They join the leaders of conservative groups and GOP legislators in at least seven other states—including Alabama, Montana, Missouri, Tennessee, New Hampshire, Wyoming, and Texas—who are lobbying for more restrictive primary elections before the 2024 election cycle.

“Democrats did mischief” in Georgia, Dooley said, citing analyses from The Associated Press and Landmark Communications that estimate anywhere from 67,000 to 85,000 voters who cast ballots in the state’s 2020 Democratic primaries voted in Republican primaries on May 24, 2022.

The analyses confirmed conservatives’ contention that a Democrat-orchestrated tide of “crossover” votes proved decisive as Georgia Secretary of State Brad Raffensperger garnered the required 50 percent in the GOP primary to avoid a runoff against Trump-backed challenger Rep. Jody Hice (R-Ga.).

“In 2024, if he is on the ballot, [Democrats] could use this as a weapon to stop Trump in the GOP primary,” she said.

Dooley said she has drafted a petition that calls for the state to revise its primary rules to require participants be registered with a party for 60 days prior to participating in a primary.

“Whatever primary you vote in, you are going to need to be a registered voter in that party,” she said. Such legislation “is sorely needed” to ensure voters don’t cast primary ballots for candidates “they have no plans to vote for in the general election.”

While Dooley has drafted the petition, she hasn’t aggressively circulated it because two state lawmakers have said they will sponsor 2023 bills essentially calling for the same revisions.

State Rep. David Clark (R-Buford) and Sen. Colton Moore (R-Trenton) in a June 6 press conference said they would introduce legislation “in the name of election integrity” to close the state’s primaries.

“So all we’re asking is that the parties have the freedom to associate with their base, with their voters who are interested in their morals and their principles,” Moore said. “We’re trying to make the primary pure, and that’s election integrity.”

Georgia is one of 15 states with open primaries. In these states, registered voters of any affiliation may vote in any party primary they choose. Voters can’t vote in the primary election of more than one party each election, but open primaries are most likely to induce “crossover” voting.

Georgia House Speaker David Ralston (R-Blue Ridge) has already said he wouldn’t support such legislation, saying in a statement that there’s “no need to change” the state’s open primary system.

“The establishment” of both parties doesn’t want to change Georgia’s primary system because “that way, it can be used as a weapon against us,” that is, against conservatives demanding a change from the status quo, Dooley said.

Unless the state legislature closes primaries to only voters registered with the party, “it always guarantees that conservative candidates have a hard time winning because you are always going to get the liberals, the Democrats, to cross over,” Renacci said.

Ohio is one of six states that has a partially open primary system where voters can cross party lines and request either a Republican or Democratic primary ballot if they do so within deadlines that vary by state.

“There wasn’t even a majority of Republicans” voting in those two Republican primaries and others on the May 3 slate, he said.

Renacci said that during the spring Democratic groups sent emails “that said to ‘stop the radical right from taking the governor seat, the Senate seat,’ to go to the polls to vote for DeWine and [Matt] Dolan” in the GOP U.S. Senate primary.

Of ballots cast in Ohio’s Republican primaries, only “44 percent were actual Republicans” with more than 233,000 of the 1 million votes coming from unaffiliated voters and at least 160,000 “pure” Democrats crossing over to disrupt the parties’ elections, Renacci said.

As a result, Vance, with just 32 percent of the tally, emerged from a crowded field to win the party’s nod and in November will take on U.S. Rep. Tim Ryan (D-Ohio), who easily won his party’s contest.

Renacci said Democrats joined the race on behalf of Dolan, “a moderate at best” who had been consistently polling in surveys of “likely Republican voters” at less than 8 percent but scored more than 23 percent in the primary, only 6,000 votes behind Mandel.

With more than 230,000 non-Republicans casting ballots in the Republican gubernatorial election, Renacci said those votes were essentially the difference in ensuring DeWine would be on the ballot in November.

“If you would have removed the Democrats and independents, these votes would have all changed,” he said.

Renacci said he expects a bill seeking to close the state’s primaries to be introduced for Ohio’s 2023 legislative session.

“We are starting to talk with legislators,” he said.

Renacci also expects resistance from “establishment Republicans” and “moderate Democrats,” who “like the way” the state’s primary system is currently.

When asked if he includes DeWine among those “moderate Democrats” who like the state’s primary system the way it is, he chuckled, “You said that. I didn’t.”

That poll will be cited when 2023 bills seeking to close primaries are introduced, Renacci said. “Conservative legislators believe it should be done. We’re going to continue to push this.”

Similar proposals to close primaries are being discussed in other open-primary states like Georgia, such as Alabama, Montana, Missouri, Texas, and New Hampshire, as well as in states with partially open primaries like Ohio’s, such as Tennessee and Wyoming.

“Don’t let the Democrats do what they did in another state last week,” Trump told Hageman supporters in Casper, Wyoming, on May 28, days after the Georgia primary, calling on Republicans to not “allow Democrats to vote in a Republican primary.”

How much influence Wyoming’s Democrats can have in a deep red state where they’re outnumbered 4-to-1 is debatable, but some analyses suggest crossover voters benefited Gov. Mark Gordon in his 2018 GOP primary victory over a field of Republican rivals which included Hageman.

Cheney, who trails Hageman by as much as 28 to 30 percent in various polls, had claimed in interviews through winter and spring with various media that she wouldn’t solicit Democrats to cross party lines and vote for her on Aug. 16.

That assurance ended in June when registered Democrats across the state began receiving direct mail from Cheney’s campaign with instructions on how to switch parties to vote for her in the GOP primary.

Cheney’s campaign website, which touts her as the best candidate to “represent all Wyomingites,” also includes “learn how to vote for Liz” with instructions for Democrats and independents to cast ballots in the Republican primary.