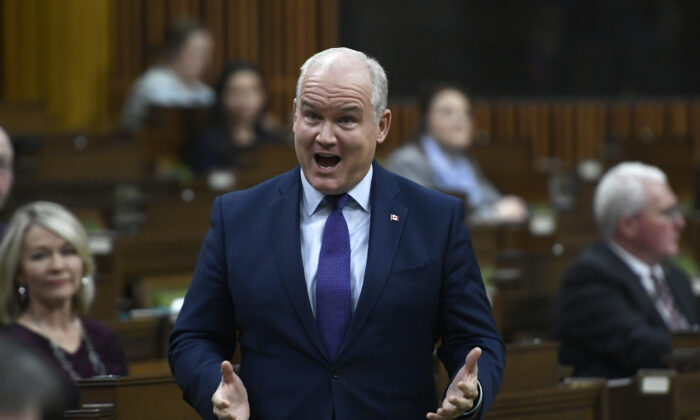 Conservative Leader Erin O'Toole rises during Question Period in the House of Commons on Parliament Hill in Ottawa on Dec. 10, 2020. (The Canadian Press/Justin Tang)
Canada

The Conservatives pressed the Liberal government in the House of Commons on Dec. 10 for answers on the foreign affairs department’s push to have representatives from China’s military attend winter survival training in Canada.

“Why was [Deputy Prime Minister Chrystia Freeland] trying to push the Canadian Armed Forces to train the Chinese military on our soil, when they are abusing our citizens, our rights, international law,” Conservative Party Leader Erin O’Toole asked during the question period.

Government documents obtained by Rebel News under the Access to Information Act showed that in 2019, Global Affairs Canada urged the Department of National Defence not to cancel hosting Chinese military representatives in Canada for winter survival training. The defence department, which had sent representatives to attend winter survival training in China in 2018, had been asked by the U.S. military to stop the joint training, citing security concerns about the risk of knowledge transfer to China.

The documents contained information the government didn’t want made public, but due to a cited human error, the information wasn’t redacted.

The documents reveal that Global Affairs had warned that cancelling military engagements with China could be seen as a “retaliatory move related to the Meng Wanzhou case.” After Canada’s arrest of Meng, the CFO of Huawei Technologies, under a U.S. extradition request in December 2018, China took a hostile stance toward Canada, subsequently detaining Canadian citizens Michael Kovrig and Michael Spavor.

O’Toole said in a news conference earlier in the day that the documents show the Liberals are “pressuring Canada’s military to join exercises and to cooperate with the communist Chinese military in Canada—the People’s Liberation Army—being trained by the Canadian military in Canada.”

“To learn that the Trudeau cabinet is kowtowing to Beijing is frankly disturbing. This highlights the Liberals’ approach and their dangerous approach to China,” he said.

“I have long personal experience reporting on authoritarian communist regimes, and I am very aware of the threats they pose,” said Freeland, a former journalist.

“When it comes to China, Canada is appalled by the treatment of the Uyghrus. We stand with the people of Hong Kong, especially the Canadian citizens there, and the release of Michael Spavor and Michael Kovrig is an absolute priority for our government.”

“The Liberals ignored security and scientific experts on the CanSino vaccine deal, they ignored our allies on Huawei, and now we learn they are ignoring the chief of defence staff when it came to military exercises with China,” he said. “Defence officials clearly said there was risk of knowledge transfer working with China.”

A report by Global News earlier this month said that top executives at CanSino, a Chinese company that Canada had partnered with for vaccine supply to Canada, were part of China’s Thousand Talents Program, an initiative to transfer knowledge to China in exchange for benefits. The collaboration ended earlier this year after China blocked CanSino’s delivery of the vaccine to Canada.

Canada has yet to make a decision on whether to ban Chinese telecom giant Huawei from its 5G networks. Washington has warned that failing to ban the company would result in the United States limiting intelligence sharing with Canada.

Sajjan said Canada doesn’t “train with the Chinese military,” and added that the defence minister under the previous Conservative government had in 2013 signed a cooperation plan initiative with China.

A tweet by the Canadian Army in February 2018 shows pictures of Canadian soldiers taking part in winter survival training exercises in China, and saying that Canada has invited the People’s Liberation Army to take part in the same trainings in Petawawa in Ontario at a later date.

The released government documents say Global Affairs had issued a foreign policy guidance document to the defence department, encouraging the department and the Canadian Armed Forces to “pursue bilateral cooperation with the PLA.”

A spokesperson for Global Affairs said in an email that Canada’s relationship with China “is complex and we are engaging with eyes wide open.”