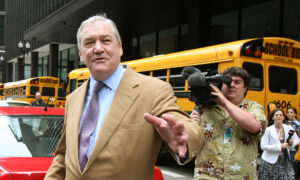 Former media mogul Conrad Black said on Nov. 25 that regardless of the outcome of the Nov. 3 presidential election, the “great Trump war” will continue.

Black, 76, a Canadian-born British citizen, suggested in an interview with The Epoch Times’ “American Thought Leaders” program that President Donald Trump is well-positioned “to begin round three of this great Trump war.”

The longtime columnist and author said that while he believed President Donald Trump could be “well within sight” of losing this year’s presidential election, the U.S. Senate race in Georgia shows promise.

“It is a highly questionable state of affairs,” he said. “You have alleged, plausibly alleged, widespread irregularities in only four or five states … all of them governed by Democrats, and real problems about the verifiability of mass-mailed unsolicited ballots coming back in bulk in these drops in the middle of the night.”

Biden on Nov. 7 declared that he had won the presidential election. Trump has rejected Biden’s declaration, claiming that fraud is the reason for Biden’s lead in several states. The Trump campaign has announced legal challenges in several states.

The Epoch Times has not called the presidential election for either Trump or Biden, pending the outcome of legal challenges, as the Electoral College has the final say.

Black described Trump’s 2016 election bid as “round one” of the “great Trump war,” applauding his success as “the first person elected president who had never sought or held a public office, elected or unelected, or ever held a military command.”

“He came altogether from outside, he changed party seven times in 13 years; not concerned with party loyalty, but with the best route to The White House,” Black said.

“And so with round two was this improbable coalition: stylistically offended suburban Republicans; the detritus of the old working and lower-middle-class Democratic Party; all of academia; the entire media; Big Tech; Wall Street; Hollywood; professional sport; and, frankly, urban agitating groups masquerading as crusaders for civil rights, but as we saw through much of the summer, rather more interested in vandalism and violence,” he continued.

“All of that combined, apparently by the narrowest of margins and with the benefit of ballot harvesting and other skullduggery, to defeat him. So it’s on to round three. Now, his prospects for round three are good,” Black said, referring to the Georgia Senate runoffs in January.

Georgia’s two Senate seats were sent into runoffs after no candidates reached the 50 percent of the vote needed to win. The Republican incumbents, Kelly Loeffler and David Perdue, will face off again with their Democrat challengers, Rev. Raphael Warnock and Jon Ossoff, respectively, on Jan. 5, 2021.

Both Republican candidates have argued that they must be reelected in order to prevent the Democrats from gaining enough power to carry out their socialist agenda.

Last week, Loeffler said that “everything’s on the line,” suggesting that GOP-controlled Senate would be a “firewall against socialism.”