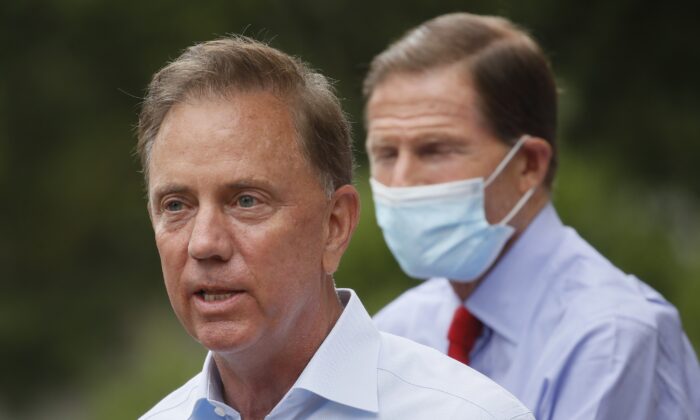 Connecticut Gov. Ned Lamont announced plans on Thursday to ease some of the state’s restrictions related to the CCP (Chinese Communist Party) virus but said Connecticut won’t be like Mississippi or Texas.

According to Lamont’s plans, from March 19, Connecticut is lifting capacity limits for most venues like retail, libraries, personal services, indoor recreation, gyms/fitness centers, museums, aquariums, and zoos, offices, and houses of worship. Theaters will remain limited to 50 percent capacity and restaurants can have no more than eight persons per table with doors to close at 11 p.m.

Sports and sporting tournaments will be allowed, subject to Department of Public Health guidance, and the state’s travel advisory will be modified from a requirement to recommended guidelines.

“While it is encouraging to see the number of cases in our state gradually going down and people getting vaccinated at rates that are among the highest in the nation, we need to continue taking this virus seriously to mitigate its spread as much as possible,” Lamont said.

Lamont reminded residents to “continue to wear face coverings in public and when around other people outside of your households, maintain social distancing, and keep washing your hands and cleaning surfaces.”

“Connecticut has made tremendous strides to combat this pandemic, and we don’t want to lose the progress that we’ve made,” he added.

Connecticut’s most recent data for March 3 shows that the number of confirmed cases has increased by 878. Of a total of 47,132 tests, the daily positive test rate stands at 1.86 percent. Currently, 433 patients remain in hospital—a drop of 18. There have been a total of 7,693 deaths across the state from the CCP virus.

According to the CDC, 1,345,595 vaccine doses have been distributed to the state and 1,087,313 doses have been administered. About 21.3 percent of Connecticut’s population has received at least one vaccine dose and 8.8 percent are fully vaccinated for the initial strain.

Lamont’s regulations ease came two days after Texas and Mississippi announced they were lifting their mask mandate and allowing businesses to operate at full capacity.

“We’re not going to be like Mississippi and Texas,” Lamont said before his announcement, according to Hartford Courant.

Lamont’s plan also included increasing childcare capacity from 16 to 20 from March 29, and reopening outdoor amusement parks on April 2. Outdoor event venues will also be allowed to increase to operating at 50 percent capacity with a maximum of 10,000 people, and indoor stadiums at 10 percent capacity. Camps and festivals have been advised that they can begin planning to open for the summer.