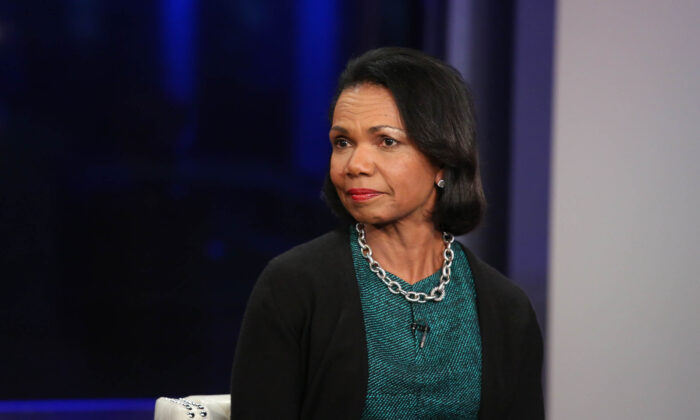 Former Secretary of State Condoleezza Rice said that a curriculum that incorporates critical race theory’s (CRT) ideas should not be taught to schoolchildren, because it sends the wrong message to young children—that one race is less than the other.

“But if I could take a moment to talk about the whole issue of critical race theory and what is and is not being taught,” Rice said during an interview on “The View” Wednesday. “One of the worries that I have about the way that we’re talking about race is that it either seems so big that somehow white people now have to feel guilty for everything that happened in the past—I don’t think that’s very productive—or black people have to feel disempowered by race.”

One of “The View” hosts, Sunny Hostin, countered Rice’s comment by saying that those who oppose CRT don’t want real history being taught in schools.

“People want to hide history … that is exactly what we are seeing is this rollback of history. Parents don’t want children to hear about the real history,” said Hostin.

Opponents of CRT say they want all of the history of the United States taught including the history of slavery and segregation, but they do not want the divisive concepts like systemic racism, white supremacy, and sexually explicit education being taught to their children.

Those who are opposed to CRT also say the teaching materials being used in schools are rooted in the Marxist theory of class struggle, but with a particular focus on race. Proponents of CRT see racism in every aspect of the American public and private life and seek to dismantle American institutions—such as the Constitution and legal system—which they claim to be inherently and irredeemably racist.

While schools have for years been quietly infusing CRT into their curriculums, it wasn’t until last year, when lockdowns were enacted in response to the CCP (Chinese Communist Party) virus pandemic, that parents were able to see what their children were being taught. Since then, parents have been increasingly stepping forward to oppose CRT due to its racially divisive and anti-American concepts.

In the last year, parents across the nation have been voicing their opposition to this type of curriculum during school board meetings. Rice also stressed that parents should have a say in what is taught to their children.

“Parents ought to be involved in their children’s education. Their children are in school seven hours, that’s a very formative period. … they’re actually homeschooling them in increasing numbers, and I think that’s a signal,” said Rice.

Professor Rice said that she lived through the injustices of the segregated South but her parents taught her that she could overcome her circumstances and that she was not a victim.

“I couldn’t go to a movie theater or to a restaurant with my parents. I went to segregated schools, but we moved to Denver. My parents never thought I was going to grow up in a world without prejudice, but they also told me, ‘that’s somebody else’s problem, not yours.’ You’re going to overcome it, and you are going to be anything you want to be, and that’s the message that I think we ought to be sending the kids,” said Rice.

She said the way race is being taught in schools disempowers black children and vilifies white children.

Asra Nomani of Virginia, the VP of strategy and investigation with Parents Defending Education gave examples of how CRT vilifies white students. She cited a book called “Not My Idea” during a recent interview with NTD TV’s “The Nation Speaks.”

“This is a book that has been read to children in elementary schools from Philadelphia to Texas. And one of the really critical ideas here is this one, that whiteness is a bad idea, and the picture then is of the devil, and what has happened then is that white people have signed a contract with the devil that ends up with stolen land, stolen riches, and special favors.” Nomani said.

Rice said she is opposed to teaching children that white students are bad, as Nomani pointed out.

“I would like black kids to be completely empowered to know that they are beautiful in their blackness, but in order to do that, I don’t have to make white kids feel bad for being white. So somehow, this is a conversation that has gone in the wrong direction,” said Rice. “It goes back to how we teach the history. We teach the good and we teach the bad of history. But what we don’t do is make seven- and ten-year-olds feel that they are somehow bad people because of the color of their skin. We’ve been through that and we don’t need to do that again.”

Rice was born in Birmingham, Alabama, and grew up while the South was racially segregated. She was the first female black secretary of state and the first woman to serve as National Security Advisor.