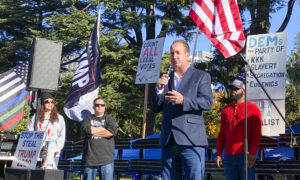 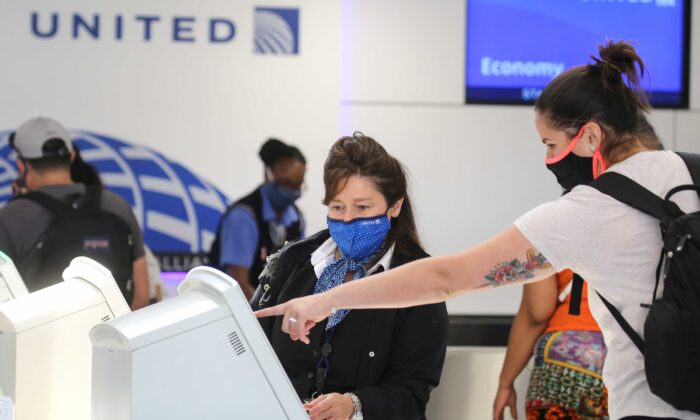 A United Airlines employee wears a required face covering along with a passenger at check-in at Los Angeles International Airport (LAX) amid the COVID-19 pandemic, in Los Angeles, on Oct. 1, 2020. (Mario Tama/Getty Images)
Viewpoints

‘Common Pass’ May Open Door to Loss of Freedom 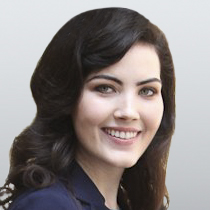 In October, United Airlines tested “the first transatlantic trial of Common Pass, an app that creates a standard digital format for COVID-19 test results.” The app has been developed by the Commons Project and the World Economic Forum, and the hope is that it will both facilitate travel across borders and provide confidence to passengers that it’s safe to fly again.

The pass right now reports on a traveler’s COVID-19 test status, but it could easily transition to track vaccination status, and indeed the industry expects it to do just that. The acceptance of these types of apps as a condition to travel is a very slippery slope, and they shouldn’t be permitted for domestic flights.

Both the origin and function of this app are concerning. First, Common Pass has a worrisome developer. It has been created in partnership with the World Economic Forum (of annual Davos Summit fame), a group comprising the world’s mega-wealthy, most of whom are committed climate change activists and confirmed globalists.

Historically, Americans are very independent people. We are suspicious of databasing and have rightly resisted gun registries and federal programs that would give our government centralized data on our lives, health, and habits.

Americans are also unusually mobile compared to the rest of the West, another hallmark of our unique freedom. For decades now, liberal elites have tried to limit American mobility by taxing cars and gas and encouraging people to embrace more urban living arrangements.

The sheer expanse of the United States, with sprawling suburbia and dotted with small towns where people live their lives away from the influence of liberal bastions and where they have better control of their local institutions and schools, helps keep America free.

A scene in the film “The Hunt for Red October” sums up the ethos of this American freedom well, when the Soviet submarine captain dreams of life in America: “I will live in Montana … and I will have a pick-up truck, or um, possibly even a recreational vehicle, and drive from state to state. Do they let you do that? … No papers?” No papers, state to state.

Sometimes, we take these attributes for granted, but globalists are always looking for ways to tell other people what to do, centralize power, and frankly erode American independence. Our ease of movement and our disconnect from centralized databasing make it harder to control the American public. The likelihood that COVID-19 would be used as an excuse to implement and fast-track new technologies that would finally get a better handle on Americans and our mobility was clear from the start.

While some people see an app as a useful tracking device, airlines see the app as the lifeline that will save their business. The airlines will almost certainly try to transition this app from tracking your test status to tracking whether you’ve been vaccinated.

In September, Southwest Airlines CEO Gary Kelly was interviewed by the Dallas Morning News. He confirmed that the effect of the pandemic on the airline industry is crushing and unsustainable. According to Kelly, Southwest thought in the spring that fall travel would be down 30 percent (which was itself a devastating prospect), but the reality is worse than anyone predicted. Travel was down 65 percent this fall.

Because Southwest isn’t filling middle seats yet, every flight is operating at a loss. Kelly was asked how long Southwest could continue to do that, and he admitted the company can’t do it indefinitely. He said: “In the end, it’s all about what customers are comfortable with. … I’m not really prepared to say when we might change, but at some point yes, absolutely, we’re going to have to get our business back. It’s just going to have to be at the right time.”

Kelly returned to one point several times during the interview—the necessity of vaccines to get back to normal. Kelly said “I believe we’re going to have to muddle through this until we get a vaccine, until we functionally reach herd immunity,” and when discussing the current decline in travel, he said, “what I would predict now is that I don’t see that changing significantly from here until we get a vaccine.”

In short: The multibillion-dollar airline industry that is currently on life-support—barely sustained by the billions in federal aid it has already received from the government—believes that only a vaccine can provide enough public confidence to get people back in the air and get the airlines back in the black. You better believe the airlines will be pushing for a mandate, and a way to reassure the public that other passengers have been vaccinated, too.

Remember that Southwest was one of the earliest airlines to remove any exemption to its mask mandate—no matter your disability, if you don’t mask, you don’t fly. The airline no longer cleans the planes between every flight, as they did at the start of the pandemic, but it has ejected passengers before takeoff and permanently banned people unwilling to mask.

Southwest and the other airlines are laser-focused on creating COVID-19 theater—visible rules and procedures that make people feel safe. A high-tech app that verifies vaccination status before boarding is the ultimate COVID-19 theater to get their business back.

The left stoked the paranoia surrounding COVID-19 to the point that a large segment of society is afraid to leave their homes. Now, to get business up and booming, airlines need a vaccine and a way to assure all the occupants of a flight that everyone is indeed vaccinated.

One-world elitists want to better track and control their populations, which up to now has been a difficult row to hoe in the United States. None of this is to suggest that the airlines are working in concert with power-hungry elites. This could be the confluence of wholly independent interests focused on the same goal.

But Americans shouldn’t have to “show papers” or proof of a vaccine to travel in America, and the leftist globalists can and will maximize the benefits of tracking—something they couldn’t have achieved without the chaos of COVID-19 and the airline industry’s considerable influence.

American liberty is unique—not just in history, but in our modern world. Uniquely American attributes we might not even think about are often the silent and invisible bulwarks that defend us from oppression.

The COVID-19 death rates have shown that COVID-19 is an ugly and unpredictable illness, but it isn’t the global killer we were (mis)led to believe. We should be most worried now about the ways that our enemies will manipulate the ongoing paranoia to accelerate initiatives they’ve long pursued without success.

If we aren’t wary, COVID-19’s ultimate victims could be more of our liberties and the American way of life.

Molly McCann is Of Counsel at Sidney Powell, P.C., defending Lt. Gen. Michael Flynn. She writes about politics and law at MollyMcCann.com.