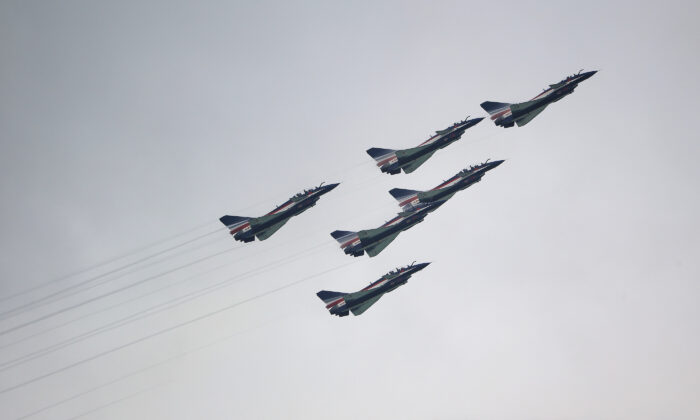 As the Chinese regime continues to intimidate Taiwan by repeatedly breaching the island’s airspace and escalating tensions in the Taiwan Strait, it is developing an advanced fighter jet aircraft in secret.

The Epoch Times recently obtained a military document from a trusted source which unveiled details of a concept fighter jet project, driven by China’s “military-civil fusion” strategy. It also reveals that the Chinese military is developing the new generation fighter jets for attacking Taiwan and competing with the United States.

Several countries around the world are developing a “sixth-generation fighter” aircraft that is more advanced than the fifth-generation fighter aircraft currently in service, including the United States, United Kingdom, Germany, Spain, France, Italy, Sweden, India, Japan, Taiwan, and Russia.

The Chinese regime is also developing its own version of a sixth-generation fighter. The Epoch Times recently obtained a document issued by China’s Ministry of National Defense in 2017, in accordance with Beijing’s 13th Five-Year Plan. The document revealed the CCP’s pre-research plan for sixth-generation fighter aircrafts, with a focus on developing an unmanned combat system.

The document clearly states that it is a military-civil fusion project, meaning, private companies would cooperate with the military to develop the technology.

The sixth-generation aircraft is dubbed the “Sky Master,” which is a structure with attack functions and intelligent functions that can combine and configure. The document says that taking a look at “Gundam” will help to envision what the prototype looks like. “Sky Master” and “Gundam” are characters in the Japanese animation series, “Gundam.”

In an interview with China’s state-owned CCTV in 2017, the general designer of the Chinese fighter jet F-20, Yang Wei, revealed that the appearance of the Chinese sixth-generation fighter jet is sci-fi-like, which he said could resemble the robots in the American Hollywood film, “The Transformers.”

Aimed at Taiwan and US

In the appendix of the document, it introduces the use of a combat system called “WAH-la” in the new generation fighter aircrafts, which can be installed in manned and unmanned dual-purpose attack helicopters. The document claims, “If fighting against Taiwan, WAH-la can reach the opposite shore with a squad of combatants within a distance of 160 kilometers [99 miles] at 210 kmh [131 mph] in 45 minutes … to achieve the purpose of liberating Taiwan at low cost.”

The Chinese regime considers Taiwan a part of its territory, even though the island has been governed as a distinct entity for more than seven decades. Beijing has vowed to bring Taiwan under its fold, by military force if necessary.

The “pre-research plan” also appended a project proposal. It analyzed American concept fighters and pointed out where the new Chinese generation fighters can surpass it. It claimed that at the time, “although the United States has more than 500 fighters with unmanned systems, it has not developed the technology of an air processing system” to allow the fighters to operate in a swarm.

“The integration of an air data processing system and a distributed combat system is a revolutionary new concept. It is also the goal of this project,” the document stated.

It is unclear what is the current status of the sixth-generation jet’s development.

The document proposed to use the model of “military-civil fusion project J-31” to develop the sixth-generation fighters. This refers to China’s J-31 fighter jet, developed by Shenyang Aircraft Industry Group (abbreviated as “Shenfei”). Shenfei is a subsidiary of the Aviation Industry Corporation of China (AVIC). It has developed a number of fighter jets for the Chinese military.

The Pentagon last year identified 31 Chinese companies, including AVIC, as owned or controlled by the Chinese military. Then-president Donald Trump issued an executive order banning U.S. investments into these companies.

Yuan Zhige contributed to this report.