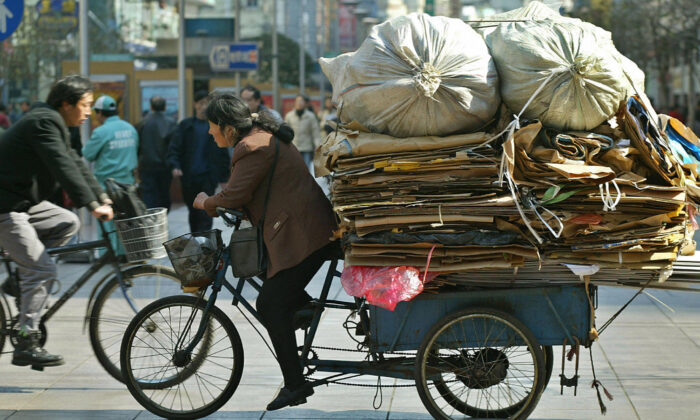 A migrant worker rides a tricycle full of waste along a street in Shanghai, China on Feb. 18, 2003. (Liu Jin/AFP via Getty Images)
Chinese Regime

The Chinese communist regime has made much fanfare of its apparent success in lifting tens of millions of rural residents out of poverty.

But leaked internal documents obtained by The Epoch Times show that Beijing’s strategy is reliant in part on directing state-owned and private enterprises to buy a range of goods from China’s poorest provinces—an approach critics say will not bring about sustainable economic improvement for these regions.

In late February, Chinese Leader Xi Jinping gave a televised speech declaring that China had “secured a complete victory” by lifting 98.99 million rural residents out of poverty, after efforts by the Chinese Communist Party (CCP) over the last eight years. He called the achievement a “miracle on earth.”

The state-direct strategy to eliminate poverty was outlined in a document called the “2020 action plan” released last March by the regime’s state planning agency, the National Development and Reform Commission.

The plan called on China’s state-owned companies to continue to lead the effort in buying products made in poor areas of China. Private companies were urged to prioritize purchases of agricultural products from regions in China whose economies were badly hit by the pandemic.

Additionally, the Chinese military stationed in poor regions of China should expand their consumption of local products and services, according to the document.

Li Linyi, a current affairs commentator, told the Chinese-language Epoch Times that China’s state-direct approach cannot really help impoverished people. He said that once Chinese authorities or Chinese state-owned companies decide to change their purchasing policies, nobody will be there to pick up the slack to buy goods from poor regions.

As a result, Chinese regions or people that were once “lifted” out of poverty will fall into financial hardship again, according to Li.

Li added that the victory declared by the CCP was merely a “political show” for Xi.

China sets its own standard of poverty as people who earn less than $2.30 per day, according to state-run media. That poverty line is lower than the standard set by the World Bank, which defines poverty as those earning $5.50 or less a day for upper-middle-income countries like China.

The World Bank wrote on its website that as of September 30, 2020, there were about 373 million Chinese living under the $5.50-a-day poverty line—more than a quarter of China’s population.

One of the leaked internal documents was issued by the state-owned Aviation Industry Corporation of China (AVIC) last April. The document called on its employees and offices to buy products from several poor counties in China, saying this was an instruction from China’s State-owned Assets Supervision and Administration Commission.

Several counties named in the document, including Zhenning and Guanling, were located in southwest China’s Guizhou Province, one of the poorest provinces in China. The document said that the company planned to reach the goal of spending 2.5 million yuan (about $383,510) to buy products from Zhenning and 2 million yuan (about $306,840) from Guanling.

The document also listed specific products and their prices from these different counties. For instance, AVIC employees were asked to buy certain brands of rice, vegetable oil, tea, shampoo, tissues, among others, from Zhenning.

Finally, AVIC asked its regional offices and units to take the purchasing initiative seriously since eradicating poverty was at the top of the CCP’s agenda. The initiative would end in September 2020.

In another leaked document dated June last year, the municipal government of Yantai, a city in eastern China’s Shandong Province, urged the city’s top officials to “proactively mobilize” local trade organizations and all sectors of society to purchase products made by poor regions in Shandong.

Critics have long asserted that China doesn’t have a real private sector since the CCP controls every aspect of society and also embeds party cells in companies. In the fight against poverty, China’s private sector, under instruction from the CCP, has made considerable contributions, according to an March 2020 article published on the website of the Chinese People’s Political Consultative Conference, a political advisory body.

Chinese authorities in Guizhou mobilized 5,595 private companies since 2015 to assist about 1.39 million impoverished locals, the article said. Together, the companies contributed 21.7 billion yuan (about $3.3. billion).

China’s state-run media Xinhua, in an article published in August 2020, admitted problems associated with some of the products purchased from the poor region. An unnamed senior high school teacher said that none of his family liked the taste of the tea leaves he purchased.

Another unnamed company employee said that the agricultural products were more expensive than similar products sold on the market.

China’s corruption problems, which has resulted in the downfall of many high-ranking CCP officials since Xi took power in 2012, have also plagued local officials taking part in the effort to help the poor.

Last month, the county government in Taihui, located in eastern China’s Anhui Province, reported that 33 local officials were penalized for corruption such as embezzling government funds to assist the poor.

Similar corruption problems were revealed by the municipal government in Tonghua, a city in northeastern China’s Jilin Province, when it reported in December that 10 officials were penalized without providing more details.

These corruption cases are hardly a recent phenomenon. In September 2017, Chinese authorities in Pingxiang, a city in southwestern China’s Jiangxi Province, announced that 92 officials were penalized for corruption, among them 74 were given party discipline punishment and 7 were prosecuted at local judicial bodies.

Aside from corruption, China’s campaign to reduce poverty was sometimes met with a lackadaisical effort by regional authorities.

In a 2019 leaked document obtained by The Epoch Times, Chinese authorities in Ongniud, a region in northern China’s Inner Mongolia, described communication and other problems hampering efforts to help impoverished locals.

For instance, local officials only showed up at the homes of the poor bringing rice, noodles, cooking oil, and milk without offering real assistance. There were also instances of residents being completely unaware of local job assistance programs.

Li said the only way to solve China’s poverty problems is to reform its political and economic systems, so that the country’s wealth is not concentrated among the CCP elites and some powerful business groups.