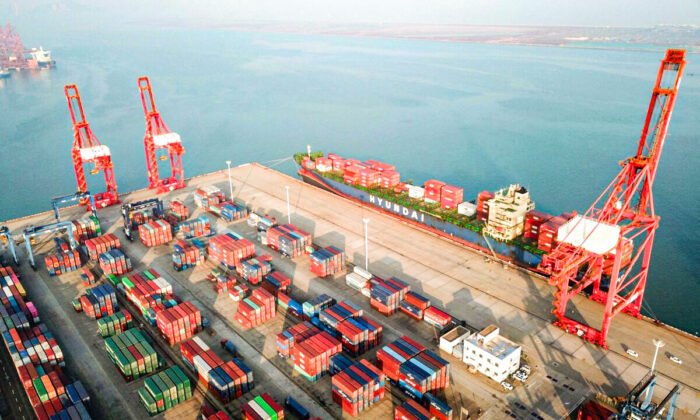 Seeing China’s financial hub Shanghai, home to 25 million people, come to a standstill amid more than four weeks of lockdowns has made those residing in Beijing nervous. The capital city has detected growing COVID-19 outbreaks and has rushed to conduct mass testing in a bid to contain the virus.

Almost all 22 million inhabitants in Beijing completed three rounds of testing as of April 30. The results may determine whether they’ll be destined to experience the same fate as those in Shanghai, where fenced-in people have been banging pans on their balconies at night to protest the month-long lockdown.

Shoppers in Beijing have rushed to stock up on food, just in case. Officials have closed schools—without specifying a reopening date—and more venues. Workers have set up blue metal barriers around residential blocks where infections have been recorded. A sign placed outside such a residential complex reads, “Entry only. No exit.”

The scenes in Beijing are reminiscent of other Chinese cities battling the fast-moving Omicron variant. As the Chinese regime appears determined to contain the outbreak under its heavy-handed “zero-COVID” policy, lockdowns and mass testing—and the well-documented suffering they cause—are likely to remain commonplace.

As of April 28, at least 26 cities across the country are currently in partial or full lockdown, covering roughly 78 million people, according to calculations by The Epoch Times based on notices by local authorities. These cities range from northern Baotou, a major supplier of rare earths, to eastern Yiwu, an export center that produces everything from Christmas trees to presidential campaign merchandise.

Those not experiencing lockdowns still face restrictions. The tech hub Hangzhou city is testing its residents every 48 hours. About 12.2 million students and workers must provide proof of negative results if they want to take public transportation and enter schools or offices. Similar measures will be effective in Beijing after May 5, with officials at an April 30 briefing calling it “normalized nucleic acid tests.”

The Chinese regime’s relentless zero-COVID fight has forced foreigners to rethink their lives in the international financial hub of Shanghai. The month-long closure of the city, home to numerous multinational firms, has left even white-collar professionals struggling with food shortage issues.

While many are allowed to walk around in their neighborhood now, concerns about being taken in to quarantine remain. The city’s 25 million people will continue to take more tests until May 7, local officials said at a May 1 press conference. A positive result means separation from families and living in crowded quarantine facilities, with 24-hour lights and no hot water.

“Until the lockdown, I really couldn’t feel the authoritarian government, because you’re more or less free to do what you want,” said Jennifer Li, a foreigner who’s making plans for her family to leave the city that has been their home for 11 years.

The regime’s handling of COVID-19 “made us realize how human lives and human mental health is not important to this government,” she said.

The European Chamber of Commerce recently warned that the “number of foreigners in China have halved since the pandemic began and could halve again this summer.”

The strict restrictions are also crushing economic activity. The gauge of manufacturing activity contracted at a steeper pace in April, reaching the lowest point since February 2020, when lockdowns halted industrial production and disrupted supply chains for the first time.

The official manufacturing Purchasing Managers’ Index (PMI) fell to 47.4 in April from 49.5 in March, offering a first glimpse into the economic pain inflicted by lockdown measures.

Analysts from several investment banks have further cut their forecasts for the country’s economic growth rate as the lockdown in Shanghai has dragged on. The lowest is from Nomura, with a prediction of 3.9 percent, down from 4.3 percent previously, well below the official target of a 5.5 percent increase.

In a worst-case scenario, “China can expect a decrease in GDP [gross domestic product] by 53 percent if all cities are forced into lockdown,” Yanzhong Huang, a senior fellow of global health at the Council on Foreign Relations, told an April 26 virtual panel.

China’s yuan currency fell by more than 4 percent in April, its biggest monthly drop in 28 years, while its stock markets have been the second-worst performers this year, after sanctions-hit Russia.

The slowdown is likely to weigh on global recovery as the lockdown will hurt companies’ sales in China and ripple through the supply chain, said professor Yen Huai-Shing, deputy director of the Taiwan Chung Hua Institution for Economic Research.

Carmakers and phones are experiencing shortages of components sourced in China. The United States imports close to 18 percent of all products from China and 33 percent of electronics, according to official data.

U.S. giants, including Apple and Microsoft, have said that China’s lockdowns have intensified global supply chain disruption and raised uncertainty about their business outlook.

A main source of the supply chain troubles has been severe delays in transportation: frequent COVID-19 testing has disrupted the work of truckers and port workers.

“Once the lockdown is lifted and economic activity once again springs to life, a pileup of products from accumulated orders will surge into the United States,” Sara Hsu, a clinical associate professor of supply chain management at the University of Tennessee at Knoxville wrote in The Diplomat.

This means that the backlogs that Los Angeles and Long Beach ports experienced last year will happen again, she noted.

“[China’s] COVID lockdown brings more uncertainty to foreign investors and damage to their confidence,” she told The Epoch Times.

Yen suggested that multinational companies should consider relocating their supply chain elsewhere. Some firms in the semiconductor hub of Taiwan have already started diversifying supply chains since 2018 during the U.S.–China trade war, she said.

As zero-COVID batters the country’s economy, Chinese leader Xi Jinping announced on April 29 an infrastructure push to boost demand, a method Beijing used during the global financial crisis in 2008 and 2009 that created a mountain of debt. However, he didn’t provide key details, such as the amount of spending or the specific time frame.

Still, Xi, who’s seeking an unprecedented third five-year term in office this autumn, showed no signs of changing course at the April 29 meeting of the 25-member Politburo, the center of power within the Chinese Communist Party, which is also led by Xi.

The leadership called for the country to “persist with dynamic zero,” referring to zero-COVID, according to the meeting summary released by the state-run Xinhua news agency.

“For now, China is not getting out of the corner the president [Xi Jinping] has maneuvered the country into,” Joerg Wuttke, president of the EU Chamber of Commerce in China, told Swiss media outlet Market NZZ.

“They are prisoners of their own narrative. It’s rather tragic: China was the first to get into the pandemic, and it’s the last to get out. And in the meantime, they’ve been telling the whole world that they’re the best.”

Luo Ya and Reuters contributed to the report.