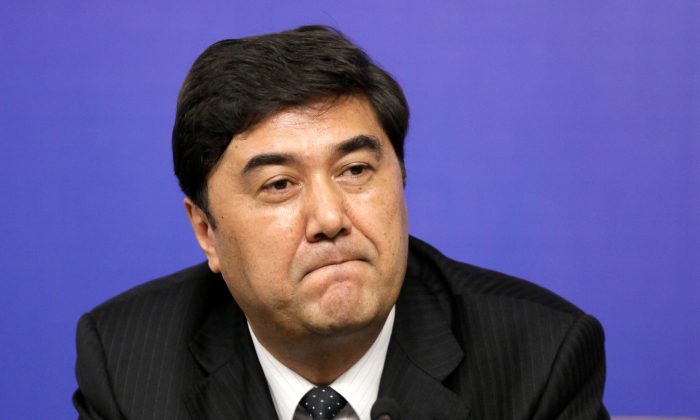 Bekri was formally arrested on April 2 under charges that he abused his position to obtain “huge amounts of wealth,” according to the CCP’s anti-corruption watchdog, the Central Commission for Discipline Inspection.

Bekri was a official in the northwestern region of Xinjiang since 1993. In this region where mainly ethnic Uyghur minorities reside, Bekri promoted Beijing’s sinicization policies to restrict Uyghur customs and language while forcing locals to adopt customs of the Han ethnic majority.

Over 95 percent of the roughly 11 million people living in Xinjiang are Uyghur, who mostly practice Islam.

Dilxat Raxit, spokesman for the World Uyghur Congress, an international group representing exiled Uyghurs, once said in a September 2018 interview with Hong Kong newspaper Apple Daily that Bekri was a “traitor” to his people.

In recent years, Beijing has intensified its crackdown on Uyghurs, including by establishing concentration camps where Uyghurs undergo political indoctrination and brainwashing in an attempt to force them into giving up their faith.

Bekri had in fact been arrested on Sept. 20, 2018, upon arrival at the Beijing airport after a business trip to Moscow, according to Chinese media reports. Three days later, the CCDI announced that Bekri was under investigation.

Central authorities then removed Bekri from his positions as vice chairman of the National Development and Reform Commission and director of China’s National Energy Administration.

The CCDI announced the results of its investigation on March 16, determining that Bekri abused his position to accrue wealth, including by promoting officials who bribed him, or supporting businesses that bribed him.

Through bribery, he and his family enjoyed an extravagant lifestyle, including long-term chauffeur services with luxury sedans. The CCDI also alleged that he “traded power for sex.”

“Bekri resisted the investigation, and did not tell the truth when questioned by officials,” the CCDI announcement said.

The CCDI decided to expel Bekri from the Party and seize his assets.

Bekri, 57, was born and raised in a rural town of Xinjiang.

Bekri became an official in local government in 1993, and was promoted to be mayor of Xinjiang’s capital city, Urumqi, in 1998. From 2008 to 2014, Bekri was governor of Xinjiang.

As governor, Bekri promoted “dual-language education,” which means beginning in pre-school, all Uyghur children, whose mother tongue is Turkic, must learn and speak Mandarin Chinese.

Bekri also promoted policies in Xinjiang that repressed Uyghurs under the excuse of stamping out separatist elements.

In July 2009, a series of violent riots broke out between local Uyghurs and Han Chinese, which resulted in at least 197 deaths, and injured more than 1,700.

Hong Kong media Ming Pao reported at the time that Bekri had received intelligence in advance about the riots, but did not take any action to prevent them.

The World Organization to Investigate the Persecution of Falun Gong (WOIPFG), a U.S.-based organization dedicated to investigating the Chinese regime’s persecution of the spiritual practice Falun Gong in China, named Bekri as the person who ordered the torture of several Falun Gong practitioners detained at the Xinjiang No. 5 Prison in November 2010.

Falun Gong is a meditation practice with moral teachings based on the principles of truthfulness, compassion, and tolerance. After Falun Gong was introduced to the public in May 1992, up to 100 million Chinese took up the practice by 1999, according to official estimates. The Chinese regime feared its explosive popularity, with then-Party leader Jiang Zemin launching a nationwide persecution in July 1999 to arrest and detain adherents. To this day, many are tortured while imprisoned, according to WOIPFG.

Hong Kong media have reported that Wang and Zhang are key followers of Zhou Yongkang, the former security czar who was a key ally of Jiang and was sentenced to life imprisonment in 2015 for graft crimes.

Zhou and the rest of the Jiang faction make up an opposition force to current Party leader Xi Jinping. The anti-corruption campaign Xi launched shortly after coming to power in 2012 has primarily ensnared Jiang faction members.