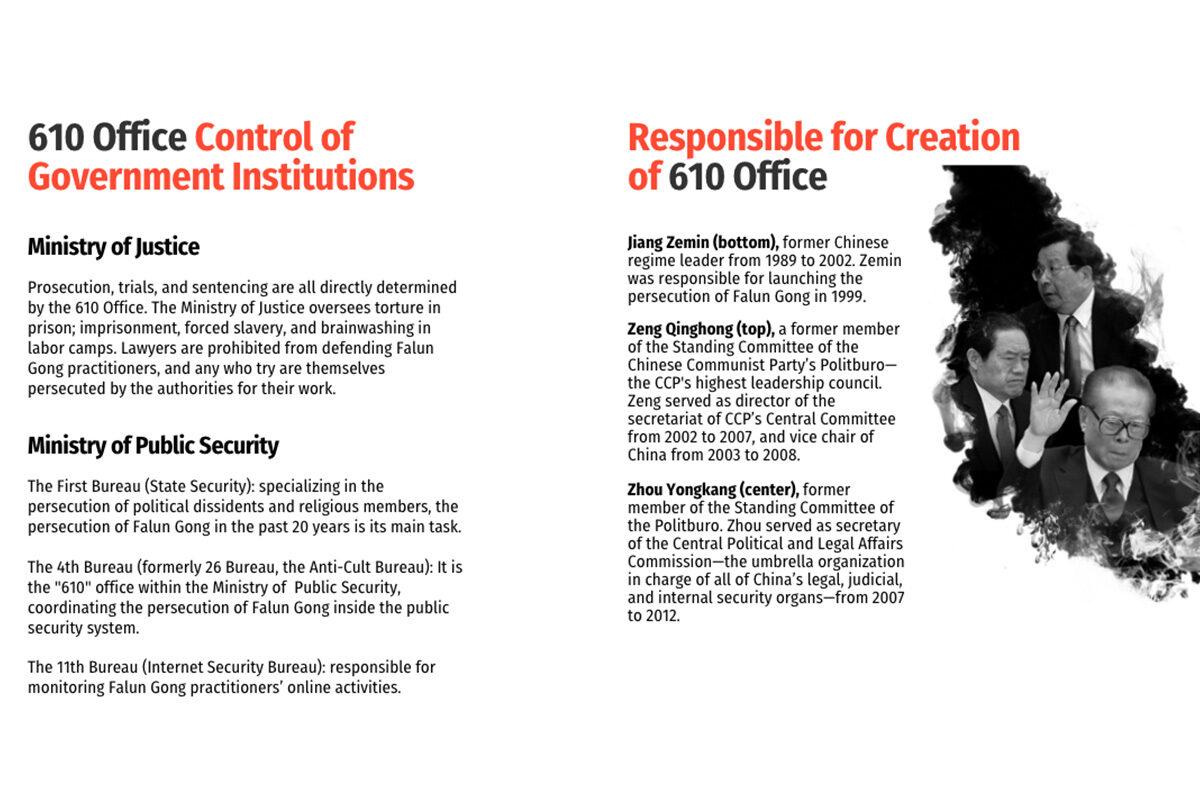 The “610 Office,” one of the Chinese regime’s deadliest and most notorious agencies tasked with clamping down on dissent, exacts enormous influence within the Party and enjoys unchallenged power to persecute religious minorities, an internal document obtained by the Chinese-language Epoch Times shows.

The office, formally known as the Central Leading Group on Preventing and Dealing with Heretical Religions, is an extra-legal Party organization similar to Nazi Germany’s Gestapo, with various names as disguises in public.

It was established by former Chinese Communist Party (CCP) leader Jiang Zemin on June 10, 1999—hence its name—for the sole purpose of carrying out the persecution of Falun Gong, a spiritual meditation practice that originated in China and has since spread to roughly 90 countries. The practice became enormously popular—with roughly 100 million adherents in China by 1999, according to official estimates. Threatened by this number, which was greater than the number of Party members, Jiang ordered the brutal suppression of Falun Gong practitioners.

According to the documents obtained by Chinese-language Epoch Times, the 610 Office in Fangshan District in Beijing, formally known as the Fangshan Political and Legal Affairs Commission’s “Anti-Heretical Religion Guidance Branch,” conducted an assessment titled “Status of Work in Preventing and Handling Heretical Religions” in 2019.

This kind of work-performance assessment usually happens at the end of the year among China’s government agencies.

The agencies evaluated by the 610 Office include both Party and government institutions, such as the Political and Legal Affairs Commission (PLAC); the Organization Department, which is in charge of assigning officials’ posts and promotions; local police bureaus; local prosecutor’s offices; courts; and the rubber-stamp legislature.

In 2019, five of the agencies were demerited for not meeting the set criteria in persecuting Falun Gong.

Falun Gong, also known as Falun Dafa, is a traditional Chinese spiritual practice that consists of simple, slow-moving exercises and a meditation, with moral teachings based on the principles of truthfulness, compassion, and tolerance. Adherents said the practice has helped them relieve stress and improve their health.

Under the leadership of the 610 Office, Falun Gong practitioners have been arbitrarily sentenced to labor camps, prison, or brainwashing centers.

At least 4,476 Falun Gong adherents have been killed in the persecution in China, according to Minghui.org, a website that documents the CCP’s persecution of Falun Gong.

The actual number of deaths is thought to be much higher, as thousands of cases remain unconfirmed due to the CCP’s “tight-fisted control over details of the persecution,” according to Minghui.org.

“The 610 office is just like Hitler’s Gestapo,” said Guo Guoting, a Chinese human rights lawyer in exile, in an interview with the Falun Dafa Information Center. “They are powerful and they got enough financial support from the government so … they secretly control all the Falun Gong practitioners in their local areas.”

The 610 Office has branches all over China, down to the tiniest village.

However, “no legislation was passed establishing it [and] no provisions formally outlined its mandate,” said Sarah Cook, senior research analyst for China at Freedom House, a U.S.-based NGO.

The number of staff at the 610 Office is unknown, due to its secretive nature and the fact that 610 staff may have multiple roles, serving in other departments simultaneously.

Cook estimated back in 2011 that the 610 Office retained at least 15,000 officers based on district-level numbers on local government websites.

Functioning without approval from the Party’s rubber-stamp legislature, the National People’s Congress, and the 25-member Politburo made up of Party elites, the 610 Office has never had a legal basis for its existence.

The 610 Office is also involved in state-sanctioned forced organ harvesting from prisoners of conscience—mostly Falun Gong practitioners—resulting in large numbers of unexplained deaths, according to the World Organization to Investigate the Persecution of Falun Gong, a U.S.-based research nonprofit.

Independent investigators have confirmed that this organ harvesting is still occurring, despite the CCP’s denials.

In a report (pdf) released on March 1, the China Tribunal, an independent people’s tribunal convened to investigate allegations of forced organ harvesting from prisoners of conscience in China, ruled that “forced organ harvesting has happened in multiple places in the PRC and on multiple occasions for a period of at least 20 years and continues to this day.”

It also concluded that Falun Gong practitioners were the main source of organs for the state-sanctioned practice.

The 610 Office derived authority from its connection with the PLAC, a parallel organization that controls all elements of China’s security apparatus: public security (police), state security, judicial, and prosecutorial systems.

Current CCP leader Xi Jinping took several actions to weaken the 610 Office after he came to power in 2012, as part of his political moves—including a sweeping anti-corruption campaign—targeting officials associated with former CCP general secretary Jiang.

On March 21, 2018, the CCP announced that the 610 Office and its functions would be subordinated to the PLAC and the Ministry of Public Security. The office appears to have been renamed, with no references to its official or informal names appearing after 2019.

This April saw the purge of Sun Lijun, a public security official who had served as deputy head of the 610 Office, as well as the retirement of justice minister Fu Zhenghua. Fu, who was concurrently the ministry’s deputy Party secretary, had also previously run the 610 Office.

However, a 2019 year-end assessment done by the 610 Office, as well as later documents referring to similarly named organizations, shows the agency or its successors still carry out the Falun Gong persecution post-restructuring. These organizations appear to be empowered with the extralegal authority to enforce those policies across broad sections of the government—in other words, the same powers that the 610 Office once wielded.

This article has been updated with additional information on recent developments concerning the 610 Office.

Allen Zhong
senior writer
Follow
Allen Zhong is a long-time writer and reporter for The Epoch Times. He joined the Epoch Media Group in 2012. His main focus is on U.S. politics. Send him your story ideas: allen.zhong@epochtimes.nyc
MORE HIDE
Comments Load More