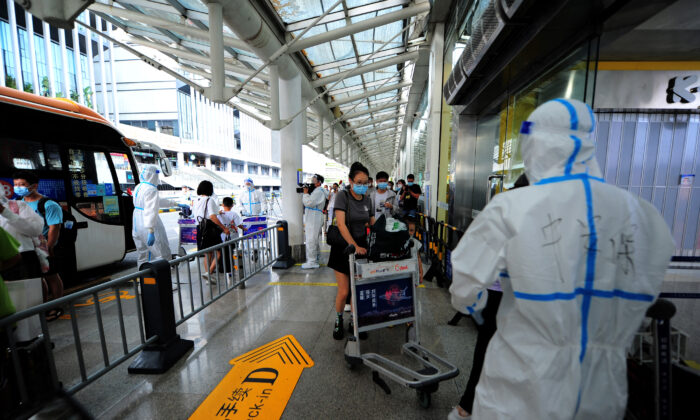 Tourists go through pre-departure formalities at the Sanya Phoenix airport as stranded holidaymakers prepare to leave the COVID-hit resort city of Sanya on Hainan Island, China on Aug. 9, 2022. (STR/AFP via Getty Images)
By Alex Wu

A health expert has sharply criticized the Chinese regime’s lifting of international travel restrictions in the midst of a massive COVID wave sweeping through the country, saying the move is “extremely irresponsible” and could cause a global resurgence of the pandemic.

The National Health Commission announced on Dec. 26 that the country would end all quarantine requirements for inbound travelers from Jan. 8, 2023. Travelers will need to obtain a negative PCR test within 48 hours of departure, it said. Currently, travelers entering China need to undergo five days of mandatory quarantine in an approved facility, followed by three days at home.

The health body added that outbound tourism, which plummeted to almost nothing during the pandemic, will resume in an “orderly” fashion. It also removed the cap on the number of international flights to and from China.

The regime’s immigration administration said that passport applications for citizens intending to travel internationally will resume on Jan. 8.

Since these announcements, a top topic on Chinese social media has been “I can finally go abroad” after nearly three years of travel restrictions.

Chinese travel platform Tongcheng Travel released data on Dec. 27, showing that the number of searches for visas to go abroad increased by 10 times, and the search volume of international air tickets soared by 850 percent.

Japan, Thailand, South Korea, the United States, Singapore, Malaysia, Australia, and the UK were among the most searched destinations.

The border reopening comes as China is gripped in a surge of COVID, which by the regime’s own estimates infected 248 million people in the first 20 days of December. Analysis by UK researchers also projected 167 and 279 million cases nationwide, which could lead to between 1.3 and 2.1 million deaths.

Earlier this month, the communist regime abruptly reversed its draconian zero-COVID policy that had battered the economy and caused extreme suffering among hundreds of millions who endured sporadic lockdowns for nearly three years.

But the lack of preparation for the lifting of the policy has resulted in health services and mortuaries being overwhelmed, and severe drug shortages as the virus spirals out of control across the country.

Sean Lin, a virologist and former lab director at the viral disease branch of the Walter Reed Army Institute of Research, said that the Chinese Communist Party’s (CCP) opening up of the country is actually a strategy to get everyone infected not only within China, but around the world.

“When they can’t control the outbreak, they push it to the whole world. Just like when COVID first broke out in Wuhan, people who had been infected in Wuhan were allowed to travel around the world. The strategy is the same now as before,” he said.

COVID first broke out around the fall of 2019 in Wuhan, a city with 11 million residents in central China. Prior to the city’s lockdown on Jan. 23, 2020, more than 5 million had left the city without being screened for the virus, according to the then-mayor of Wuhan. During China’s initial lockdowns in January, the CCP had banned domestic travel, but left international travel open, meaning a large number of people carrying the virus were able to seed the disease all over the world.

Lin pointed to the regime’s lack of transparency amid the latest outbreak, a consistent behavior over the past three years during the pandemic.

“The CCP is not sharing data, and the international community doesn’t know how many different virus variants are spreading in China, and whether there are other compound infections,” he said.

“Under such circumstances, it is extremely irresponsible for the CCP to let the people out of the country which is a huge epidemic area. Put another way, it has a very treacherous purpose and is very malicious.”

The regime’s official virus case and death figures since the lifting of zero-COVID has drawn widespread skepticism. The country recorded only eight COVID deaths in December, a figure clashing with mounting reports of crematoriums across the country working at over capacity.

Health officials at the provincial and city level have also reported millions of infections in their region, contradicting the official count on the national level.

Amid international scrutiny of the regime’s virus data, the National Health Commission announced on Dec. 25 that it would no longer publish data on COVID case or death figures. The Chinese Center for Disease Control and Prevention said on Dec. 27 that it would now publish such data once a month.

So far in response to the outbreak, India and Japan have tightened border controls mandating COVID tests for travelers from China.

Washington, meanwhile, is weighing controls for visitors from China due to concerns about the “lack of transparent data” coming from Beijing, unnamed U.S. officials told media outlets on Dec. 27.

The regime also announced on Monday that it was downgrading control measures for COVID from the highest level to the second highest. This categorization effectively removed the justification for China’s stringent zero-COVID measures.

This name change is an attempt by the Chinese Communist Party (CCP) to downplay the worsening outbreak, according to Lin.

The CCP has changed the name of COVID-19 “because too many people have been infected by the virus and developed severe pneumonia, which shows as white sections in their lungs; and many need hospitalization, have shown severe symptoms, and even many deaths.”

“However, the CCP doesn’t want to admit that these people were infected and contracted ‘coronavirus pneumonia’ [COVID] so it changed its name,” he added.

This would make it easier for the regime to continue to say that the deaths of these people may be caused by other pathogens or other underlying diseases. “It can exclude these deaths from the COVID death data,” Lin said.

“But I think its essential purpose is to conceal three key data: hospitalization rate, severe symptom rate, and death rate.”

The regime last week greatly narrowed its definition of a COVID death by only counting deaths caused by pneumonia and respiratory failure after contracting COVID, a change widely panned by disease experts. Under this new formula, deaths from complications at other sites in the body, or underlying conditions exacerbated by COVID will not be counted.

Fang Xiao and Luo Ya contributed to this report.