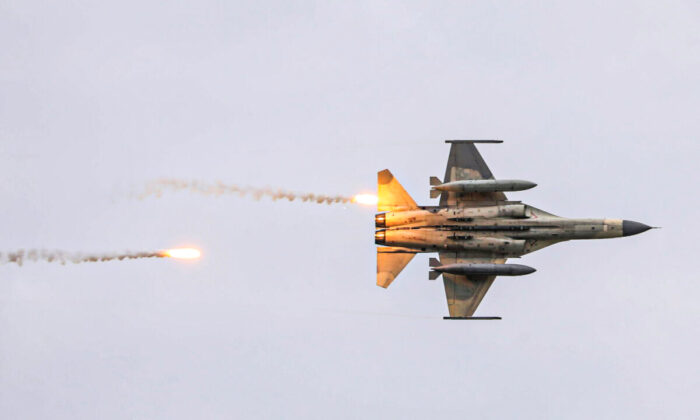 China’s ability to blockade Taiwan’s key harbors and airports presents a “grave” threat to the self-governed island, according to a new report released by Taiwan’s Ministry of National Defense.

The report outlines how the Chinese regime’s military, the People’s Liberation Army (PLA), could prevent the United States and its allies from assisting Taiwan during an invasion.

“The PLA is hoping to generally accomplish defense and military modernization in 2035, and obtain superiority in possible operations against Taiwan and viable capabilities to deny foreign forces, posing a grave challenge to our national security,” the report states.

“At present, the PLA is capable of performing [a] local joint blockade against our critical harbors, airports, and outbound flight routes, to cut off our air and sea lines of communication and impact the flow of our military supplies and logistic resources.”

Blockade Would Hamper US Assistance to Taiwan

The ability to effectively blockade Taiwan would put the self-governed island at a significant disadvantage during any potential conflict, as Taiwan depends on the assistance of its much larger partners, such as the United States, to come to its aid, the report states.

Chinese military leadership understands that and is increasingly modernizing its military with a key aim of being able to eject the United States from the Indo-Pacific. It’s greatly expanding its navy, which is the largest in the world, and military leaders in Beijing have debated the feasibility of invading minor islands controlled by Taiwan, according to a top Taiwanese security official.

In addition, recent satellite imagery has unveiled that the PLA constructed detailed mock-ups of a U.S. aircraft carrier and other Navy vessels, likely as targets for missile tests. The United States Naval Institute said that the discovery demonstrates China’s continued focus on developing anti-U.S. and anti-naval capabilities.

At a related briefing at the Pentagon on Nov. 8, Department of Defense press secretary John Kirby affirmed that China is maneuvering to deny the United States access to the region.

“Clearly, they have invested a lot in particularly air and maritime capabilities that are designed largely to try to prevent the United States from having access to certain areas in the Indo-Pacific,” Kirby said.

“What we’re focused on is that pacing challenge and making sure that we maintain the right capabilities and the right operational concepts to meet our security commitments in that part of the world.”

Rep. Mike Gallagher (R-Wis.) said in a statement that China’s pursuit of military technologies aimed at removing the United States from the region can only be effectively countered if the United States improves its own forces within the next few years.

“The PLA continues to openly demonstrate its intentions to sink the American fleet in the Western Pacific, and it is accelerating its development of those capabilities,” Gallagher said in the Nov. 9 statement.

“We cannot wait for systems that might come online in 2035 or 2045, we need a Battle Force ready to fight a conventional war with China by 2025.”

The report by the Taiwanese defense ministry maintains a stance that’s similar to those of Kirby and Gallagher. It said that in order to counter China’s attempts to “seize Taiwan swiftly whilst denying foreign interventions,” Taiwan would need to deepen its efforts to develop “asymmetric warfare” capabilities in an effort to make any attack as painful and as difficult for China as possible.

Such an effort would require Taiwan to demonstrate the capacity to target vulnerabilities in the PLA to overcome China’s advantages, according to the report.

To that end, the report identifies the sea transit phase of deployment, when Chinese forces were maneuvering to invade but hadn’t yet crossed the Strait of Taiwan, as a critical time to counter an attack from the mainland.

Such a counter would include precision strikes by long-range missiles on targets in mainland China, the deployment of coastal minefields, and the activation of garrisons on outlying islands. It also would require that Taiwan effectively coerce Chinese forces to gather at ports and airfields to present better targets.

“We should not limit ourselves to waiting for the enemy’s landing groups to sail through the Strait,” the report reads, “but should also use measures to force the enemy to assemble forces at airfields or ports further away from areas opposite Taiwan.”

To accomplish that, the report said that more exchange and cooperation with partners was necessary, as were increased production of domestically developed weapons and purchases of military equipment from the United States, the island’s preeminent arms supplier and diplomatic backer.

Such equipment would include tanks, air defense missiles, jet fighters, rocket systems, howitzers, and other items.

“After acquiring these new assets, the effectiveness of our joint counter-air, sea-control, and anti-landing operations will be greatly improved,” the report reads.

Sales like those mentioned in the report are authorized in the United States under the Taiwan Relations Act of 1979, which says the government will ensure Taiwan’s continued ability to defend itself.

To that end, Republicans in both chambers of Congress introduced legislation in November to direct billions of dollars in funding to Taiwan to help it develop and maintain asymmetrical fighting capabilities.

The report comes at a low point in trilateral relations between China, Taiwan, and the United States over the continued self-governance of Taiwan. Taiwan’s defense minister last month warned that China would have the “full ability” to invade the island by 2025.

China continues to conduct a campaign of military intimidation against Taiwan, regularly sending military aircraft into the island’s Air Defense Identification Zone, including a notable incident in which 149 warplanes entered over the course of four days in October.

The report said that 554 such “intrusions” took place between September of 2020 and August of 2021. The tactic is believed to be aimed at fatiguing the Taiwanese military and people, as well as providing China with information on Taiwan’s incident response protocols.

In all, the report said that the continued campaign of harassment undermines Taiwan’s ability to preserve the status quo in the region, and was psychologically degrading.

“[China’s] intimidating behavior does not only consume our combat power and shake our faith and morale, but also attempts to alter or challenge the status quo in the Taiwan Strait to ultimately achieve its goal of ‘seizing Taiwan without a fight,’” the report states.

Taiwan’s President Tsai Ing-wen has made bolstering Taiwan’s military capabilities a priority. Her government announced a boost of $8.7 billion toward new military development in September, and she has vowed to defend the island’s “democratic way of life.”

Meanwhile, the communist regime in China considers Taiwan to be a part of its territory.

Chinese leader Xi Jinping said that the island would be united with the mainland, during a speech in October. While peaceful unification would be best for the Chinese nation’s interests, he said, he refrained from ruling out the use of force.

The Chinese Communist Party shortly followed with an announcement that it would hold supporters of Taiwanese independence, wherever they may be in the world, to be criminally liable for life.

President Joe Biden last month said the United States has a “commitment” to defend Taiwan, a departure from a long-held policy toward the island known as “strategic ambiguity,” but his administration later walked back the comments.