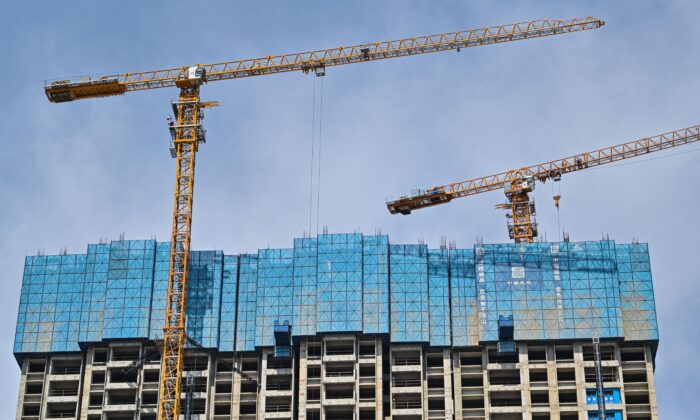 A building under construction is seen in Shanghai on Sept. 24, 2021. (Hector Retamal/AFP via Getty Images)
China Business & Economy

Beijing is levying a long-resisted property tax in some Chinese regions in order to guide house-buying as the regime seeks to tame real estate speculation.

The Standing Committee of China’s rubber-stamp legislature authorized the State Council on Oct. 23 to start taxing property owners. The scheme will last for five years, and the State Council will determine pilot areas, according to Chinese state media.

The new tax will apply to both residential and non-residential properties, as well as land and property owners, although rural landowners will be exempt.

Property prices in China have soared more than 20 fold since private homeownership began in 1998, creating an affordability crisis that has only been aggravated in recent years.

But the push for a property tax has hit a sensitive time when the country’s economy is already showing signs of stress.

China’s housing prices in dozens of cities fell for the first time in six years in September, as fallout from its leading developer, Evergrande, continues to send shockwaves through the financial and property sectors.

In Guangzhou, Guangdong Province, which borders Hong Kong, cash-strapped developers have given steep discounts in October—some as much as 40 percent—in some prime locations, according to Chinese media reports.

The downturn in the housing market, which contributes roughly 29 percent of China’s gross domestic product, is hammering the world’s second-largest economy, which analysts say is on the path to a dramatic slowdown.

Authorities had been considering levying a tax on homeowners since as early as 2003, but they hadn’t acted on it, fearing that waning property demands could trigger a fiscal crisis for local governments dependent on land sales for income.

In 2011, the megacities of Shanghai and Chongqing began tax trials on second homes and higher-end housing.

In an Oct. 15 article on Qiushi, the official theoretical journal for the Chinese Communist Party, Xi made a reference to the speculative housing prices and called for officials to “steadily advance property tax legislation and reform.”

“Houses are for living, not for speculation,” he wrote in the article, linking the plan to his broader campaign to achieve “common prosperity” in China.

Locations and other details for the property tax program remain unclear for the moment.

Jia Kang, previously the head of the Institute of Fiscal Science at China’s Ministry of Finance, recently suggested running the trial in Shenzhen city, a major technology hub, and the provinces of Hainan and Zhejiang. The “central authorities have placed high hopes” in the three regions, and they possess “good conditions” for such a program, which would provide lessons for a comprehensive property tax law, he wrote in an article published on Oct. 19 in the state-owned newspaper Global Times.