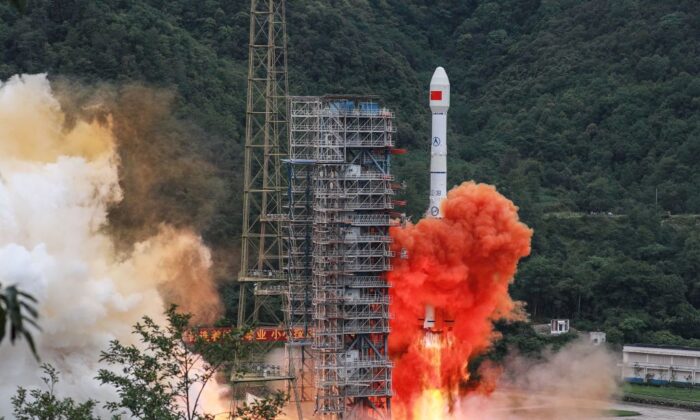 A Long March 3B rocket carrying the Beidou-3GEO3 satellite lifts off from the Xichang Satellite Launch Center in Xichang in southwestern China's Sichuan Province on June 23, 2020. (STR/AFP via Getty Images)
China-US News

The Chinese regime recently completed the rollout of its satellite-based navigation system with much fanfare. But experts have for years warned about the security threats the system poses to users and governments.

The BeiDou Navigation Satellite System was officially commissioned July 31 at a ceremony in Beijing, which was attended by Chinese leader Xi Jinping and other high-ranking Chinese officials such as Zhang Youxia, vice chairman of China’s Central Military Commission, the Communist Party’s top military decision-making body.

The BeiDou system, a state-run project launched in 1994, was completed June 23 when China launched its 35th and final BeiDou-3 satellite into geostationary orbit. In 2018, the system began providing services to countries that signed up for China’s Belt and Road Initiative. Since 2013, the foreign policy project has invested in infrastructure projects and trade routes around the world as Beijing seeks to bolster its geopolitical clout.

Chinese Foreign Ministry spokesperson Wang Wenbin claimed at a daily briefing on July 31 that the BeiDou system is in use in over half of the world’s countries.

According to Chinese state-run media, BeiDou boasts more accurate positioning than its U.S. counterpart, the Global Positioning System (GPS), in the Asia-Pacific region. In China, more than 70 percent of smartphones are using BeiDou, as of the first quarter, according to state-run newspaper Global Times.

While the BeiDou system has both civilian and military applications, Beijing developed the system primarily for military purposes, according to a 2015 report by the U.S.–China Economic and Security Review Commission (USCC), a congressional body. China’s military, the People’s Liberation Army, viewed its dependence on foreign navigation systems as a “strategic vulnerability,” the report noted.

China’s ambitions in developing BeiDou were explicitly spelled out in state media reports.

On Aug. 1, Hunan Daily reported that the BeiDou system would allow China “to have greater strength in the face of ever more fierce international competition” and “to hold the power of taking the lead.” It predicted that once BeiDou is combined with technologies such as the 5G next-generation wireless communications and artificial intelligence, it would generate “unfathomable power” for China, creating new industries with more “economic and social benefits.”

The BeiDou system is supported by Beijing under the industrial policy of Made in China 2025, a blueprint for China to supplant global competitors and become a high-tech manufacturing powerhouse.

Taiwan’s Ministry of Science and Technology, in a report issued in 2016, outlined several threats posed by the BeiDou system to smartphone users. It warned that Beijing could track, eavesdrop, and steal information from smartphone users if their devices were embedded with malware and connected to BeiDou.

Some smartphone manufacturers, such as Samsung, Huawei, and Xiaomi, have begun offering BeiDou as an option for picking up satellite signals.

The ministry called on Taiwan government employees not to use smartphones connected to the BeiDou system, so as to prevent them from being potential targets of China’s attacks.

USCC, in a separate report published in 2017, issued a similar warning.

“Beidou could pose a security risk by allowing China’s government to track users of the system by deploying malware transmitted through either its navigation signal or messaging function (via a satellite communication channel), once the technology is in widespread use,” USCC stated.

“China would also be able to attack an adversary’s access to GPS without disrupting its own capabilities,” the commission warned.

Beijing could also influence other countries to align their interests with it, by offering Belt and Road nations incentives to adopt the BeiDou system, a January 2019 report by the U.S. Defense Intelligence Agency warned.