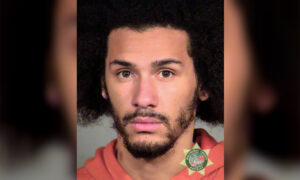 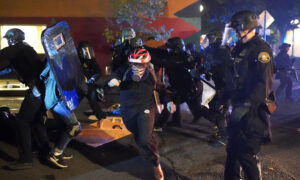 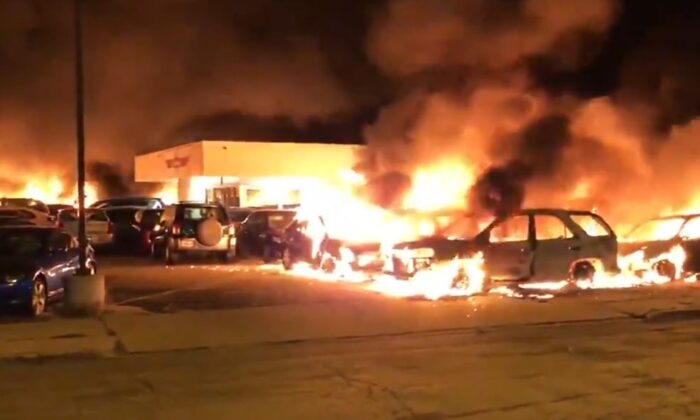 A car dealership burns after being set on fire amid rioting in Kenosha, Wis., early Aug. 24, 2020. (Drew Hernandez/@livesmattershow)
Crime and Incidents

The mayhem prompted the city and county to issue a curfew until 7 a.m.

Video footage showed a number of businesses torched by rioters, including a car dealership.

The agitators clashed with police, attacking them with fireworks and other objects.

At one point, a group blocked a sheriff’s vehicle from moving as one brandished a rifle.

Graffiti sprayed around the city suggested Black Lives Matter activists were involved in the chaos. Rioters “were chanting ‘black lives matter’ over and over and over again,” Drew Hernandez, an independent reporter who was on the ground, said in a video message.

Kenosha is located about 40 miles south of Milwaukee and 60 miles north of Chicago, next to Lake Michigan.

The rioting came hours after a black man, Jacob Blake, was shot by police officers when he allegedly resisted arrest. He was rushed to the hospital in serious condition.

Blake’s brother told Lauren Linder, a TMJ reporter, that Blake underwent surgery and was in the intensive care unit.

The state Department of Justice is probing the shooting.

According to court records, Blake had an arrest warrant issued in July for trespassing, third-degree sexual assault, and disorderly conduct.

Up close look at the car dealership fire set by BLM arsonists in Wisconsin pic.twitter.com/Mv1CC7htiD

The Kenosha Police Department said that officers were sent to a portion of 40th Street just after 5 p.m. for a domestic incident.

That response ultimately led to an officer-involved shooting, according to police officials.

Gov. Tony Evers, a Democrat, said Blake “was shot in the back multiple times in broad daylight.”

“While we do not have all of the details yet, what we know for certain is that he is not the first black man or person to have been shot or injured or mercilessly killed at the hands of individuals in law enforcement in our state or our country,” Evers said in a statement.

“I have said all along that although we must offer our empathy, equally important is our action. In the coming days, we will demand just that of elected officials in our state who have failed to recognize the racism in our state and our country for far too long,” he added later.

Evers’s office didn’t immediately respond to an inquiry regarding the potential use of state troopers or the National Guard to quell the unrest.

Republican President Donald Trump twice over the weekend said the federal government would help states and cities deal with rioting, if officials ask for assistance.

“Would bring in National Guard, end problem immediately. ASK!” he wrote on Twitter about the continued mayhem in Portland, Oregon.

“These riots are an antigovernment movement from the Left that are all in Democrat run cities. The mayors have got to let their police do what they know how to do. Would be very easy to suppress or, call in the Federal Government. We will solve problem fast!” he wrote in another tweet.

Federal officers helped deal with anarchy in Portland in July until Gov. Kate Brown, a Democrat, agreed to send state troopers to assist police officers in responding to the rioting. State troopers later left after the district attorney who oversees the city announced a new policy to presumptively drop some charges against demonstrators.