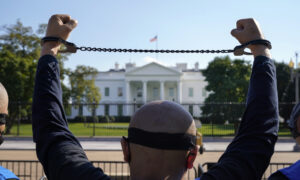 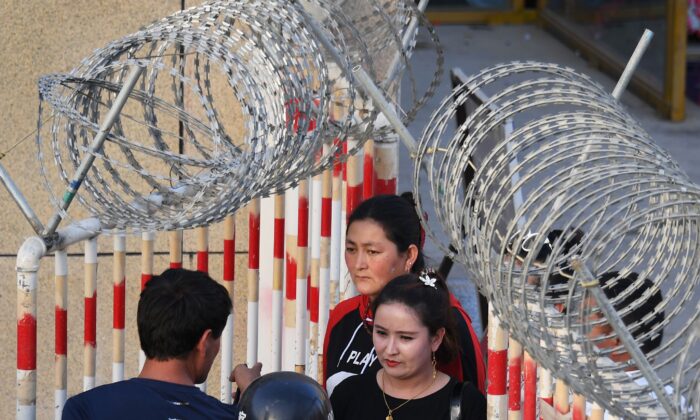 A Uyghur woman (C) goes through an entrance to a bazaar in Hotan, in China's northwest Xinjiang region, on May 31, 2019. (Greg Baker/AFP via Getty Images)
Canada

The federal government warned Canadian companies operating in and doing business with China of risks they face if their supply chains are involved in forced labour, citing credible reports of human rights abuses.

Global Affairs Canada and the Canadian Trade Commissioner Service issued an advisory last week notifying Canadian firms of the legal and reputational risks of doing businesses with entities that are complicit in human rights violations and forced labour in the Xinjiang Uyghur Autonomous Region (XUAR).

“The Government of Canada is deeply concerned by reports and documentary evidence of repression of Uyghurs and other ethnic minorities by Chinese authorities in the XUAR on the basis of their religion and ethnicity under the pretext of countering ‘terrorism’ and ‘religious extremism,’” the advisory states.

The agencies noted that Chinese communist regime’s repression of ethnic and religious minorities takes place not just in Xinjiang, but across the entire country.

“After careful examination of the available facts, I have determined that since at least March 2017, the People’s Republic of China (PRC), under the direction and control of the Chinese Communist Party (CCP), has committed crimes against humanity against the predominantly Muslim Uyghurs and other members of ethnic and religious minority groups in Xinjiang,” Pompeo said.

He added that China’s crimes include the arbitrary imprisonment of over one million civilians, forced sterilization, torture of the detainees, forced labour, and restrictions of freedom of religion, freedom of expression, and freedom of movement.

Global Affairs Canada has released a set of new measures last week which will regulate Canada’s imports and exports to prevent goods produced from compulsory labour from entering the global supply chain.

Canadian companies that have business relations in Xinjiang will have to sign a “Xinjiang Integrity Declaration” to demonstrate their understanding of the human rights situation in the region and of the laws that ban forced labour.

It is unclear when the requirement will take effect.

The advisory also noted that the Customs Tariff Act, which was amended on July 1, 2020, as part of the Canada-United States-Mexico Agreement, prohibits the import of goods made with forced labour. The Canadian Border Services Agency (CBSA) will enforce this prohibition.

At least three publicly-traded Canadian firms are still operating in XUAR, according to a Globe and Mail report on Monday.

Canadian Prime Minister Justin Trudeau said in a press conference on Wednesday that the Canadian government has spoken to the Chinese officials about human rights abuses on multiple occasions and will ensure that Canadian companies are not complicit in or profiting from such practices.

Trudeau, however, did not give a definitive answer to the question of whether he is certain Canadian companies have not been using forced labour or have contributed to human rights abuses in China.

A similar question was proposed to the International Trade Minister Mary Ng on Wednesday, but was deferred to the CBSA and Employment and Social Development Canada, which also did not provide direct answers, reported the Canadian Press.

Jacqueline Callin, a spokesperson for CBSA, explained that shipments containing goods which are suspected to be made from forced labour are detained at the border for inspection by the Canadian border services, which has the authority to ban the goods from entering Canada based on their analysis.