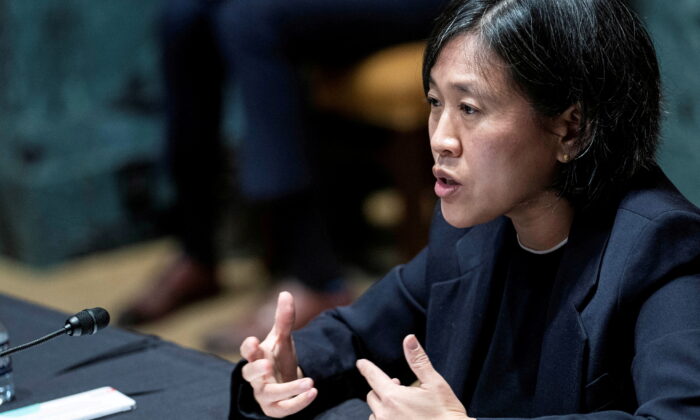 The top U.S. trade negotiator vowed on Oct. 4 to unwind some Trump-era tariffs on Chinese goods and to press the Chinese regime for “frank” talks, in a bid to end Beijing’s unfair trade practices.

In recent decades, Beijing has poured billions in state subsidies into targeted industries such as steel, solar, and agriculture, leading to the shuttering of U.S. factories and a “zero-sum dynamic in the world economy,” U.S. Trade Representative Katherine Tai told an Oct. 4 panel hosted by Washington-based think tank Center for Strategic and International Studies.

“Above all else, we must defend—to the hilt—our economic interests,” she said at the event, explaining that she would be “taking all steps necessary to protect ourselves against the waves of damage inflicted over the years through unfair competition.”

Tai said her office has conducted a comprehensive review of the “phase one” trade agreement the United States reached with China last year during the Trump administration. She’s expected to have a telephone call with her Chinese counterpart, Vice Premier Liu He, to discuss China’s performance.

She said that Washington will start a “targeted tariff exclusion process” to exempt some Chinese imports from punitive U.S. tariffs, with potential additional exclusion processes in the future.

While Tai stopped short of saying whether China had fulfilled its commitments under the deal, she said that “most importantly, we have to take up with China.”

The phase one trade deal signed during the Trump administration requires China to buy $200 billion worth of additional U.S. goods and services during the two-year period of 2020 and 2021. Analysis of Chinese trade data by the Peterson Institute for International Economics shows that China has met about 58 percent of its purchase commitments in 2020 and 69 percent through August 2021.

The deal, which halted the escalation of a trade war that heaped tariffs on hundreds of billions of dollars worth of goods from both countries, also called for the Chinese regime to improve protections for some U.S. intellectual property and market access for U.S. agricultural biotechnology and financial services firms.

While acknowledging the trade deal’s role in stabilizing the market, she shared reservations about the agreement, saying that it hadn’t addressed China’s state-centered and nonmarket trade practices.

Tai indicated that she wouldn’t rule out levying new tariffs to force China to make good on its word.

The U.S. trade relationship with China had traditionally focused on securing market access to China, but that approach has clashed with realities in the communist country “that are today causing us to open our eyes,” she said.

Since the Chinese regime joined the World Trade Organization (WTO) in December 2001, the United States has for three successive generations engaged with Beijing through high-level strategic dialogues to ensure that Beijing complied with WTO rules. But China’s follow-through was “inconsistent and impossible to enforce,” said Tai, who was involved in some of 27 WTO dispute settlement cases against China.

“Even when China changed the specific practices we challenged, it did not change the underlying policies, and meaningful reforms by China remained elusive,” she said.

Along with Commerce Secretary Gina Raimondo, Tai believes that decoupling with China isn’t a “realistic outcome in terms of our global economy.” Rather, Washington will pursue a course of “durable co-existence” with Beijing, she said.

“Our objective is not to inflame trade tensions with China,” she said, defining the administration’s goal as “re-coupling,” or to have trade with China but without falling into dependency.

“China is a participant in the global economy, and it is the one that we have unresolved issues with. I don’t think there is a path to addressing those issues without having a direct conversation with China and direct communication with China.”

She said the United States will continue to support the WTO, but will also need to “be agile,” and “think outside of the box with respect to how we can be more effective in addressing the concerns that we have been struggling to address with China on trade.”

The administration is also looking into incentives to encourage companies to “buy American up and down the supply chain,” she said, and, at the same time, collaborate with like-minded allies to shape the rules for fair trade.

The United States won’t pursue “phase two” negotiations with China on deeper structural issues such as massive subsidies to vital industries that skew global markets, because Beijing is “doubling down on its authoritarian state-centric approach,” senior administration officials said during a press call on Oct. 3.

“We recognize that China simply may not change, and that we have to have a strategy that deals with China as it is, rather than as we might wish it to be,” one of the officials said.

‘A Work in Progress’

“I would have liked to see her say, we’re going to give the Chinese two months on the stage one commitments, and after that, forget it. We’re not going to waste our time anymore,” he told The Epoch Times.

The Chinese are masters of “rope-a-dope,” he said, referring to a tactic coined by legendary U.S. boxer Muhammad Ali, in which one allows an opponent to punch himself out.

Tai’s remarks, according to Atkinson, signal that the administration will focus more on “limiting the harms of unfair Chinese policies, rather than continuing the … fruitless effort to get them to stop doing what they are doing.”

Claude Barfield, a former consultant to the office of the U.S. Trade Representative and a senior fellow at Washington-based think tank American Enterprise Institute, noted that Tai danced around the details, which he said shows that the administration’s trade policy was still “very much a work in progress.”

“It was a well-delivered speech, but I don’t think she advanced substantively a lot,” Barfield told The Epoch Times. “It shows the administration is still making up its mind as to what to do.”

The Biden administration is trying to distinguish its policies from those of President Donald Trump, but so far it has been largely carrying on what the Trump administration has put in place, he said. For instance, Tai didn’t commit to joining the Comprehensive and Progressive Trans-Pacific Partnership, a 12-nation trade pact from which Trump withdrew the United States, Barfield noted.

The Biden administration is also unlikely to cut steel and aluminum tariffs due to the foreseeable pushback from trade unions, he said.

Meanwhile, Tai faces major roadblocks ahead in trying to curb the list of trade abuses she highlighted from Beijing, according to Barfield.

Since the WTO makes decisions by consensus, Beijing could veto new rules Washington seeks to push through to hold the regime in check, he said.

Working with allies also will likely come with its own challenges.

During the panel, Tai evaded a question on how she would reconcile enforcing China’s purchase commitments with the United States and its effect on allies, given that Beijing had canceled its barley imports from Australia as it stepped up those purchases from the United States.

Nor would it be possible to get some European countries—namely France and Germany—to “go along with really strong retaliatory policy,” Barfield said.

“I just don’t think that’s in the cards,” he said. “The administration is kind of trapped itself by saying that it would actually work with allies in terms of China. Good luck with that.”