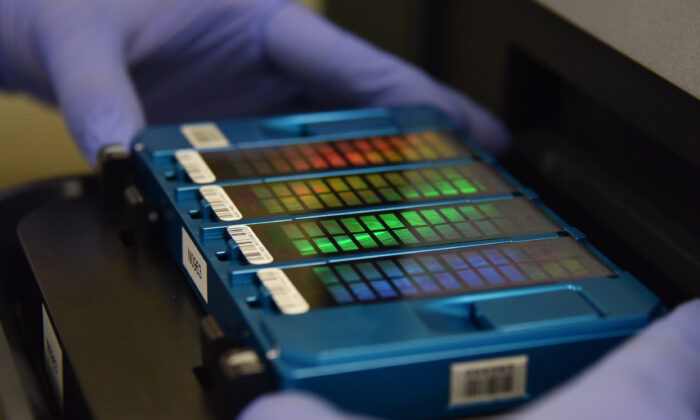 A technician places an array containing DNA information in a scanner in Beijing on Aug. 22, 2018. (GREG BAKER/AFP via Getty Images)
Chinese Regime

Chinese authorities are collecting genetic samples from millions of its citizens, including students in kindergarten and elementary schools, often without informed consent, raising concerns about civil and human rights violations.

China’s effort to build up a DNA database of its citizens is carefully reviewed in a report titled “Genomic Surveillance,” released on June 17 by the Australian Strategic Policy Institute (ASPI), a Canberra-based think tank.

“A national database containing the genetic information of tens of millions of ordinary Chinese citizens is a clear expansion of the already unchecked authority of the Chinese Government and its Ministry of Public Security,” the report said.

China’s compulsory collection of biometric data is “deepening the Chinese Government’s control over society while violating the human and civil liberties of millions of the country’s citizens.”

China’s DNA collection program began in 2003 and was limited to certain parts of the country, including Tibet and Xinjiang. But beginning in 2017, collections for the DNA database were expanded across China, after the Ministry of Public Security, in charge of the country’s police, announced that the efforts were to improve crime-fighting and better “manage and control society.”

Unlike the biometric collection efforts in Xinjiang and Tibet, where samples were collected from nearly the entire local population, Chinese authorities adopted a selective approach after 2017, only collecting DNA samples from certain male citizens, according to the report.

Such selective collection is based on the idea that females have two X chromosomes while males have one X chromosome and one Y chromosome. A chromosome is a DNA molecule containing a person’s genes.

By collecting DNA samples from men and boys, Chinese authorities have built up a DNA database of Y-STRs, which are short tandem repeats on Y chromosomes. Y-STRs are passed down from fathers to sons, with little variation from one generation to the next. It means that by knowing a man’s Y-STRs, one can easily trace down his male relatives.

“If a Y-STR database contains a large representative sample of DNA profiles and corresponding family records, even an unknown male’s data can potentially be matched to a family name and even an individual, so long as investigators have on file the Y-STR data of that male’s father, uncle, or even third cousin,” ASPI report explained.

Y-STRs are commonly used in forensics and genealogical DNA testing.

All in all, Chinese authorities were able to achieve greater genetic coverage by only collecting DNA samples from men and boys.

For example, ASPI reported that authorities in central China’s Henan Province achieved 98.71 percent genetic coverage by only collecting DNA samples from 5.3 million men, or about 10 percent of the province’s male population, according to two 2017 local scientific papers.

In November 2017, China’s Ministry of Public Security publicly called for the creation of a nationwide Y-STR database. As of April 2020, the ASPI documented that there were hundreds of police-led collection trips for Y-STR samples conducted in 22 of China’s 31 administrative regions.

In June last year, the local county government in Xia Bai Shi, located in southern China’s Fujian Province, reported on its WeChat social media account that it had collected over 1,500 blood samples from students at several local elementary schools and kindergartens, in its effort to build a “male ancestry inspection system”—another name for the Y-STR database.

ASPI warned about the intention behind building the database. It stated: “This is highly disturbing. In China’s authoritarian one-party system, there’s no division between policing crime and suppressing political dissent.”

It added that having a police-run database of citizens’ genealogies “is likely to increase state repression against the family members of dissidents and further undermine the civil and human rights of dissidents and minority communities.”

The report noted that it didn’t come across sources to suggest that Chinese authorities had sought people’s consent before collecting Y-STR samples. Moreover, authorities often do not explain why samples were being taken.

For instance, an unnamed father asked on Zhihu, China’s equivalent to Quora, whether the local health officials’ demand to take his child’s DNA sample would intrude on personal privacy. He added that when he called the local police about his concern, a female staff threatened to revoke his residency permit if he refused to have his child’s sample taken.

“The Chinese Government’s genomic surveillance program is out of step with international human rights norms and best practices for the handling of human genetic material,” the ASPI report concluded.

Chinese companies and foreign companies, including U.S.-based biomedical company Thermo Fisher, have provided “Chinese police with the equipment and intellectual property needed to collect, store, and analyze the Y-STR samples,” according to the report.

At press time, Thermo Fisher did not respond to a request for comment.

Anhui Anke, a publicly-traded company listed on the Shanghai Stock Exchange, has participated in the Chinese regime’s agenda, including the 863 Program, which U.S. authorities have said guides efforts to “clandestinely acquire U.S. technology and sensitive economic information.”

AGCU Scientech’s chairman and founder is Zhen Weiguo. He is also vice president of Anhui Anke.

Before Zhen returned to China, he graduated with a Ph.D. in organic chemistry from Brandeis University and worked at several U.S. companies, including as a staff scientist at Applied Biosystems from 1997 to 2004, according to his LinkedIn page. Applied Biosystems a brand under Thermo Fisher.

According to ASPI, Zhen returned to China in 2006 and set up AGCU under China’s state-run recruitment program, the Thousand Talents Plan.

Many professors in the United States have been indicted for failing to disclose their participation in the Thousand Talents Plan, including those at Emory University, University of Kansas and Harvard. Some Thousand Talent participants have been charged in cases of intellectual property theft.

Another Chinese company, Beijing Hisign Technology, which was founded by a member of China’s military, the People’s Liberation Army, provided Y-STR database solutions to several regional police bureaus, according to ASPI.

“Biotechnology companies should ensure that their products and services adhere to international best practices and don’t contribute to human rights abuses in China, and must suspend sales, service and research collaborations with Chinese state authorities if and when violations are identified,” ASPI recommended.