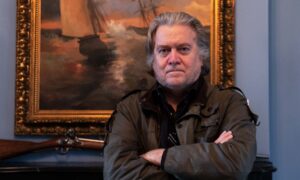 Video: 'This Is the Only Fight That Matters'—Exclusive Interview With Steve Bannon
0
Share Now
FacebookTweetParlerEmail
Copy Link 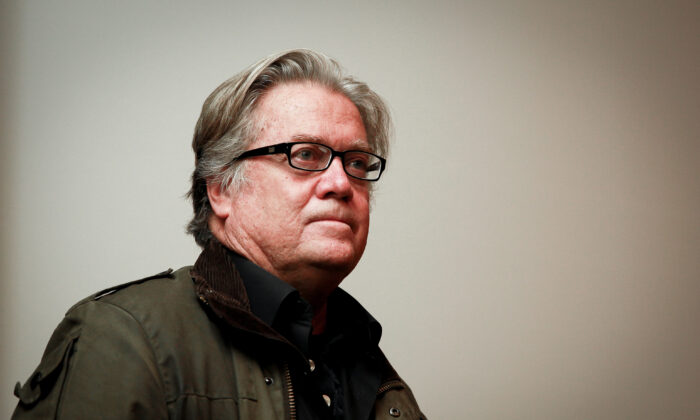 Former President Donald Trump adviser Steve Bannon on Tuesday called for the president’s supporters to pause their spending amid a crackdown on conservatives by corporations in the technology, banking, and communications sectors.

Bannon at the end of his “War Room: Pandemic” show floated the idea of a “commercial fast” for the “Make America Great Again” (MAGA) world.

“You should obviously buy food, you’ve got to buy necessities, but it’s time to understand—your votes count, but your dollars count even more. And there’s two ways dollars go: taxes—let’s not go there yet, let’s just go to commercial spending. All MAGA world is going to sit there and we’re going to hibernate. There’s no need to buy anything right now outside of basic necessities,” Bannon said.

Bannon promised to lay out the idea more on Wednesday’s “War Room.”

Bannon himself has been on the receiving end of censorship. YouTube recently stopped airing “War Room,” a growing populist morning show that’s broadcast on America’s Voice.

A YouTube spokesperson said the channel violated company policies against disseminating theories and evidence of fraud in the 2020 election. “As we said yesterday, any channel posting new videos with misleading content that alleges widespread fraud or errors changed the outcome of the 2020 U.S. Presidential election in violation of our policies will receive a strike, a penalty which temporarily restricts uploading or live-streaming,” the spokesperson told news outlets in a statement.

Bannon’s idea of a fast could strike a chord among Trump supporters looking to respond to a potentially crushing wave of censorship and blacklisting.

Twitter last week permanently banned Trump. Over a dozen other companies and services took action against the president, his campaign, and/or his organization, including Facebook, Instagram, and Stripe.

Some corporations also took aim at Republicans who voted for objections to electoral votes during the Jan. 6 session of Congress. Simon & Schuster cancelled a book contract last week with Sen. Josh Hawley (R-Mo.), one of the handful of senators to vote for both objections.

“Simon & Schuster and, unfortunately, a lot of people on the left now decided that the First Amendment is something they no longer support,” Hawley said Monday on Fox News’s “Tucker Carlson Tonight.”

“I think it really shows that we’re in a period where the First Amendment values and principles of freedom of speech, also freedom of worship, freedom of religion, these things are really under attack by some quarters, many quarters.”