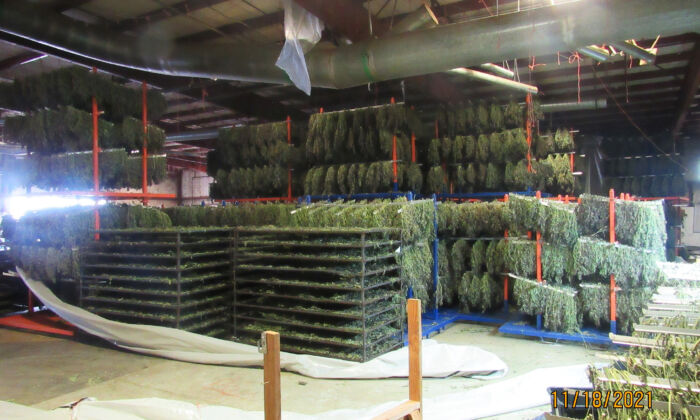 Drugs found during a raid on warehouses in White City, Oregon, on Nov. 18, 2021. (Oregon State Police)
Crime and Incidents

“That means at some point the equipment had to go through the government for exports,” he explained.

The weapons seized were also significant.

“The A.R. 15 models were equipped with red dots and military grade equipment that we don’t normally see in privately owned weapons,” he said.

The bust was the result of a two-year investigation.

Marijuana grown at 20 locations in central Oregon was allegedly sent to Portland to be distributed nationwide, according to a CODE press release.

Proceeds from the marijuana sales were laundered through Chinese restaurants and other businesses operating in Oregon before being sent back to China disguised as international business transactions, Sgt. VanderKamp said.

“We followed money from Madras, Oregon, to Hong Kong,” he added.

The operation allegedly used Chinese laborers who had been trafficked into the country through the southern border.

One of the organization leaders is a Chinese national who reportedly did much of the work overseas related to trafficking the workers.

“The operation used unskilled laborers who came into the country through Texas and California expecting to work in U.S. restaurants,” said VanderKamp.

“Workers held Mexican visas and stayed in Mexico for up to nine months waiting for conditions to be favorable to cross,” he continued. “When the chaos began on the southern border, they came over.”

Essentially narco slaves, the workers were paying off debt in China and covering the cost of their illegal immigration.

When they arrived, they were told they would be given jobs on farms making thousands of dollars per month.

“They were trained on the job and told it was legal,” he explained.

The laborers were found living at the grow sites and often were moved by the cartel.

They will not be charged as they are classified as witnesses.

“We have provided them with resources and put them in touch with the Chinese consulate.”

More suspects have been identified and detectives expect more arrests.

Unfortunately, such activities are not unusual in Oregon.

“We have a lot of cartel activity in Oregon, with Chinese and Russians running illegal indoor marijuana growing operations and Mexicans, Hondurans, and others specializing in outdoor grows,” VanderKamp said.

This case began with community complaints and tips about several of the organization’s grow locations in the area, he said.

The operations diverted or stole significant amounts of water from nearby homes, farms, and directly from pumps connected to underground water sources.

“Neighbors reported loss of water, as well as people coming and going, and lights running all the time,” he said.

The detectives requested the assistance of the Central Oregon Drug Team and the Deschutes County Illicit Marijuana Enforcement (DCIME) team to further their investigation.

Over the next two years, CODE and DCIME detectives along with U.S. Drug Enforcement Administration, Internal Revenue Service, U.S. Customs and Border Patrol, U.S. Department of Homeland Security, CODE, determined the organizational structure and identified the leadership of the criminal enterprise.

Special agents and intelligence analysts conducted hundreds of hours of physical and electronic surveillance on more than 24 members of the organization, 20 properties, bank accounts, and Chinese-food restaurants around the Pacific northwest and Asia.

The amount of cash seized in the operation has yet to be disclosed as the IRS is still processing funds.

“Law enforcement does not know if the Chinese government was aware of the cartel operation,” said VanderKamp.

“They were probably trying to keep it off the radar of both governments in order to subvert the funds,” he concluded.