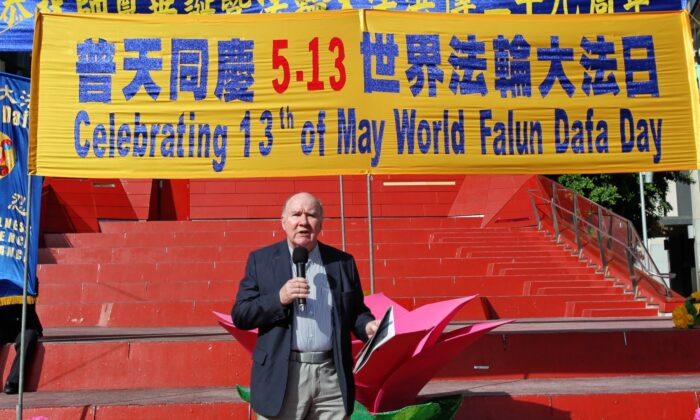 MELBOURNE, Australia—Federal Liberal MP Tim Wilson, Australia’s former human rights commissioner, has given his support to Falun Dafa practitioners on World Falun Dafa Day saying he believes liberal democratic countries, like Australia, have a responsibility to uphold religious freedoms in the face of “cultural hegemony,” being imposed by oppressive authoritarian regimes such as the Chinese Communist Party (CCP).

Wilson made his remarks in a letter of support for World Falun Dafa Day, marked annually around the world to celebrate the anniversary of Falun Dafa’s introduction to the public in 1992 by founder Mr. Li Hongzhi.

In his letter, Wilson said Australians must continue “shining light” on the CCP’s “brute force and societal oppression” against Falun Dafa practitioners in China.

“The world’s liberal democracies must renew their commitment to freedom of religion for all people, everywhere, in the face of the CCP’s brutal efforts to impose a cultural hegemony,” Wilson said.

“Freedoms of conscience, belief, and thought are not granted by government—they are an essential part of being human and therefore beyond reproach,” he added.

Falun Dafa or Falun Gong’s teachings are based on the principles of Truthfulness, Compassion, and Tolerance. Along with doing the five sets of exercises, practitioners live a healthy life in harmony with their surrounding environment.

An estimated 100 million people have taken up the practice in over 90 countries, according to Faluninfo.net.

According to the invitation letter, the practice empowers individuals to embrace what is virtuous in life and improves their wellbeing holistically.

Independent journalist Morgan Jonas, CEO of the MCJ Report, said that it was clear to him that “Falun Dafa is a peaceful practice” that deserved support.

“[Y]et in China, since the inception of the movement, the Falun Dafa practitioners have been subjected to the worst crimes imaginable,” he said.

“I consider it very important that as Australians, we support groups like Falun Dafa and their right to practice their beliefs and engage in public demonstrations.”

In China, Falun Dafa practitioners often risk their lives if they choose to publicly appeal for an end to the CCP’s persecution. When then-CCP leader Jiang Zemin unilaterally launched the persecution in 1999, he set a three-month goal to completely “eradicate” the practice. Despite this, adherents have endured harsh treatment—including torture, forced labour, killed for their organs—for over 22 years, refusing to give up their faith.

Despite the CCP’s stated goal to “eradicate” the practice within three months, Frank Ruan Jie, the editor of the Tiananmen Times, said Falun Dafa actually instead spread “all around the world.”

Frank said that in the 22 years of raising awareness of the persecution, practitioners’ efforts have instead “[restored] the spirit of the Chinese people against the [CCP].”

“I believe Falun Gong will make a great contribution to Chinese history,” he said

Peter Westmore, former national president of the National Civic Council, said the principles of Falun Dafa that practitioners espoused were “essential for a civilised and prosperous society.”

“I understand exactly where they are coming from, and I support them completely, and I congratulate Falun Dafa practitioners for upholding these important principles in public life in our country.”

Banyule Council Mayor Rick Garotti echoed Westmore, who thanked practitioners in his area for contributing positively to his council’s and Melbourne’s multicultural fabric.

“[T]he work that Falun Dafa does is really about embracing people and from a spiritual sense,” Garotti said. “It’s just another component of what makes Melbourne and Australia so great.”

A similar sentiment was expressed by Gerard Flood, from the Democratic Labor Party, who also thanked Falun Dafa practitioners for the promotion of the “highest ethical beliefs,” which he says was very much needed in today’s world.