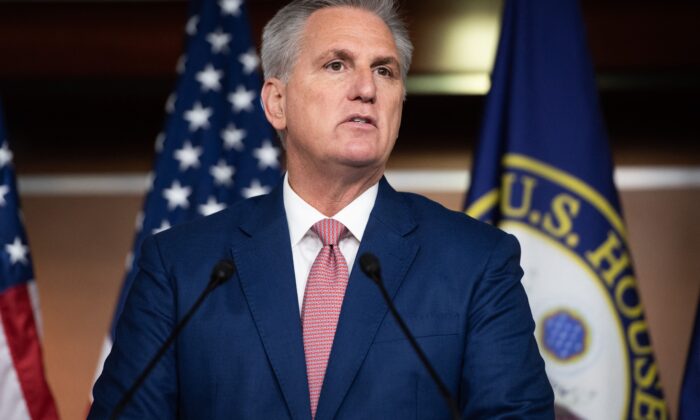 Audio Shows McCarthy Would Have Told Trump to Resign If Impeached

House Minority Leader Kevin McCarthy (R-Calif.) was captured on audio saying he would recommend that then-President Donald Trump resign if impeached during the aftermath of the Jan. 6, 2021, breach of the U.S. Capitol.

“I’m seriously thinking of having that conversation [about resigning] with [Trump] tonight,” McCarthy said during a phone call, a recording of which was released by the New York Times on April 21.

“This, this is what I think,” McCarthy said later. “We know [the impeachment resolution will] pass the House. I think there’s a chance it’ll even pass the Senate, even when he’s gone. I don’t want to get into any conversation about Pence pardoning [Trump]. The only discussion I would have with him is that I think this will pass, and it would be my recommendation you should resign.

Statements from the call were originally reported in a recent article by The New York Times that promoted a book by the authors.

A spokesman for McCarthy on Thursday responded to the report, saying that the minority leader “did not say that.”

The spokesman has not responded to a request for comment on the audio.

In the aftermath of the Capitol breach, McCarthy also allegedly suggested that Twitter should remove the accounts of some Republicans who had expressed any support for the Jan. 6 rally.

McCarthy’s spokesman also rejected that claim, saying that McCarthy “never said that particular members should be removed from Twitter.”

After the audio was released, some suggested that the source was Rep. Liz Cheney (R-Wyo.), who has been cut off from the national Republican network because she accepted a seat on the House committee investigating Jan. 6. House Speaker Nancy Pelosi (D-Calif.) picked Cheney and Rep. Adam Kinzinger (R-Ill.) and rejected members nominated by McCarthy, including Rep. Jim Banks (R-Ind.).

“While I was rallying in Wyoming against Liz Cheney, Kevin McCarthy was defending Liz Cheney among House Republicans,” Rep. Matt Gaetz (R-Fla.) said on Twitter. “While Liz Cheney was secretly recording Kevin McCarthy for the New York Times. @GOPLeader – you should have trusted my instincts, not your own.”

A spokesperson for Cheney denied the claim, saying that Cheney did not know how the tape had leaked.

“The select committee has asked Kevin McCarthy to speak with us about these events but he has so far declined. Representative Cheney did not record or leak the tape and does not know how the reporters got it,” the spokesperson told news outlets.

McCarthy, despite his comments, has maintained a more cordial relationship with the former president than has Senate Minority Leader Mitch McConnell (R-Ky.), who has quarreled with the president openly since the January 6 rally.

The New York Times report alleged that McConnell told other Republicans shortly after the breach that “the Democrats are going to take care of the son of a [expletive] for us.”

“If this isn’t impeachable, I don’t know what is,” he allegedly added.

McConnell nor his office have publicly commented on the report. The office didn’t respond to a request for comment.

Despite their relatively icy relationship, McConnell has said that he will support Trump if he is nominated again in 2024, but past comments suggest that he hopes that this is not the case.

Looking closer to this year’s midterms, McConnell has also said that loyalty to Trump’s policy agenda should not be a deciding factor in choosing a GOP nominee for tough Senate battles.

House Minority Whip Steve Scalise (R-La.) is also mentioned in the report, allegedly said in the wake of the breach that Republicans should start thinking about a “post-Trump Republican House.” Scalise did not respond to a request for comment.