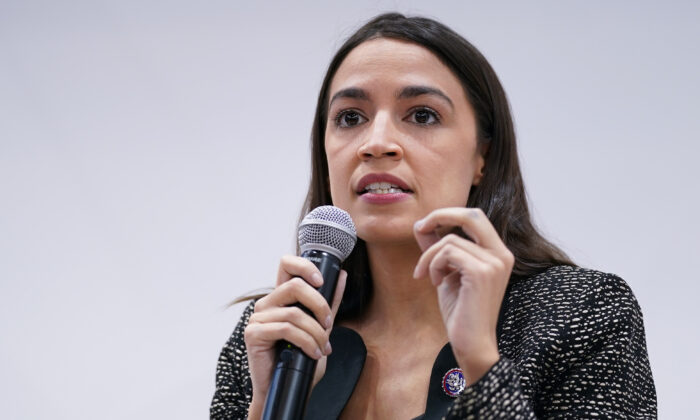 NEW YORK—Protesters held a demonstration outside the Queens office of Rep. Alexandria Ocasio-Cortez (D-N.Y.) on Jan. 14.

The activists, not representing any one organization, said their purpose was to persuade Ocasio-Cortez, also known as AOC, to introduce legislation in the House of Representatives to stop U.S. military involvement in Yemen.

Several of the protesters who participated were senior citizens, giving the illusion of a Woodstock reunion.

Alice Sturm Sutter has been participating in anti-war demonstrations since she was 20, during the Vietnam War era.

“I’m here because I’m so horrified that we’re still in the war attacking the people of Yemen,” Sutter told The Epoch Times.

Sutter sees the situation as a “humanitarian catastrophe.”

While Sutter’s winter coat was adorned with buttons that read “Black Lives Matter” and “Climate Emergency,” she puts the blame on both parties, saying the United States has been cozying up to Saudi Arabia (which is at the center of the conflict) in each administration since President Barack Obama was in office.

Sutter doesn’t think it’s up to any one party to fix the situation.

“I’d like everyone in Congress to listen to their conscience and to spearhead a resolution,” she said. “We’re appealing to AOC because we think we have some chance of success.”

However, Ocasio-Cortez’s website currently has a notice stating that neither of her New York offices are staffed, due to public health guidance from the House physician.

“Just less than a year ago, on Feb. 5, President Biden said that the war in Yemen was a disgrace and a humanitarian disaster, agreeing with most of the world,” Brian Terrell told The Epoch Times.

“And he said then that this war had to stop, and the U.S. was going to stop providing weapons to the Saudis.”

Biden has yet to make good on that promise.

Terrell feels the money currently being made in weapons manufacturing is an example of what President Dwight Eisenhower meant when he spoke about the “military-industrial complex.”

The demonstration was organized by Alice Pote, a 30-year-old from Manhattan.

“There’s ample opportunity and a very clear need based on the situation in Yemen for someone in AOC’s position to act, and given all that she’s said about opposing war and so on, it’s pretty outrageous that she’s not acting,” Pote told The Epoch Times.

“What are these progressive politicians actually doing?”

Several speakers used a megaphone to address the demonstrators and passersby, leading chants of “Biden, you can’t hide; you’re supporting genocide” and “We don’t want a photo op; we want this war to stop.”

“This is an extraordinary situation where with very few members of Congress who we think might do something and could do something,” Terrell said. “I have great hopes in AOC that she might.”