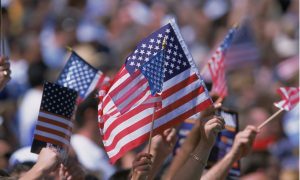 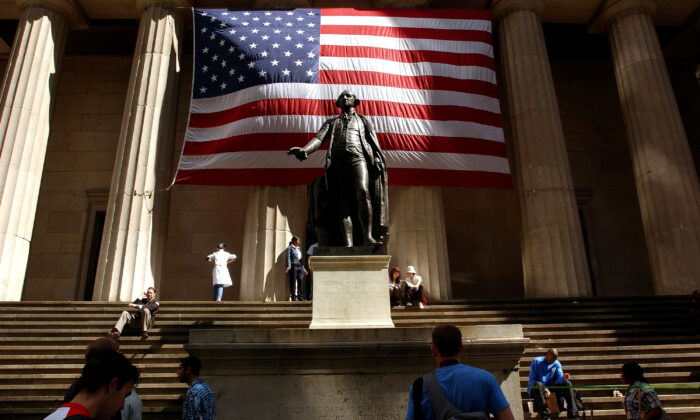 A statue of George Washington in front of Federal Hall in New York City on Sept. 5, 2002. (Spencer Platt/Getty Images)
Editorials

The decades-long communist assault on America is reaching a climax

From its founding to the present, the United States of America has represented a beacon of light that has shone forth, with religious freedom and freedom of speech not witnessed in other parts of the world.

What many have failed to realize, however, is that over the past several decades, this great nation has slowly been infiltrated by the communist specter.

Amid credible allegations of voter fraud and election irregularities, America is now on the brink of falling into the communist abyss.

The communist specter gave rise to the regimes in the Soviet Union, Cuba, North Korea, and China. Its ideology of totalitarianism seeks control over, rather than the flourishing of, mankind.

Its gradual takeover of the West has been carried out in broad daylight. As French poet Charles Baudelaire wrote in 1864, the “greatest trick of the Devil” is to persuade you that he doesn’t exist.

During the Cold War, the world was divided between two military and political camps. Yet, while their social systems appeared to be diametrically opposed, the same process was taking place on both sides, in different forms.

Many revisionist Western-style communists, socialists, Fabianists, liberals, and progressives publicly rejected the Soviet and Chinese models, while their efforts led society on a path toward a social structure no different from those of the Soviet Union and China. And so it has been for much of the Western world.

The specter of communism, however, never died.

It continued to thrive in China, the world’s most populous nation. And while the Cold War ended, the international communist movement never ceased its efforts to achieve its global goal of communist domination.

While communist regimes have continued with their rigid dictatorships, party politics in free societies have come to a point of crisis. Communism has exploited loopholes in the legal and political systems of democratic nations by manipulating major political parties.

Socialism has always been part of Marxism and the international communist movement. As Vladimir Lenin stated, “The goal of socialism is communism.” In democratic states, socialism slowly eats away at people’s freedoms through legislation.

In the West, the process of establishing a socialist system takes decades or generations, leaving people gradually numb, oblivious, and accustomed to socialism. The endgame of socialist movements implemented gradually and through “legal” means is no different from that of their violent counterparts.

Socialism inevitably undergoes a transition to communism, with people continually stripped of their rights until what remains is a tyrannical, authoritarian regime.

In actuality, socialism’s pursuit of equality drags down morality and deprives people of the freedom to incline toward goodness.

Socialism uses “political correctness” to attack basic moral discernment and artificially force everyone to be the same. This has come along with the legalization and normalization of all manner of anti-theist and profane speech, sexual perversions, demonic art, pornography, gambling, and drug use.

The result is a kind of reverse discrimination against those who believe in God and aspire to moral elevation, with the goal of marginalizing and eventually getting rid of them.

Leftist and other pernicious agendas have been able to acquire so much mainstream influence in Western countries largely due to the help of mass media. In countries run by communist regimes, all outlets are subject to state censorship, if not directly controlled by the communist party. Elsewhere, the media has been brought under the sway of financial and partisan bias. Honest reporting and discourse are buried by an avalanche of sensationalism, political virtue-signaling, and outright fake news.

All around the world, socialist and communist movements have taken advantage of economic unrest and the pandemic to edge themselves into positions of influence, with the eventual goal of overthrowing the existing social order.

We are now seeing the same playing out in America.

The United States has gone far along with the socialist ideology. Mainstream media champion the ideas of equality and follow the Chinese Communist Party’s (CCP) attacks on America. Our younger generations have come to view socialism favorably and are among the most fevered in taking part in protests and riots aimed at destroying our cultural heritage.

Meanwhile, society at large has come to support the idea that the government should provide health care, education, and perhaps eventually the cost of living. Knowingly and unknowingly, we are gradually trading our freedoms for a system that controls people.

Socialism and communism claim full ownership over all property and human beings. Socialism demands people give up their belief in God and instead take the state as God.

The United States, the place founded on a fundamental belief in freedom, has become a country where freedom gets betrayed. This has now come to a head with the 2020 election and credible allegations of voter fraud.

The nation that stands to gain the most from this is China, where the CCP has ruled brutally for more than 70 years, resulting in the unnatural deaths of at least 65 million people.

For decades, it has worked toward this objective, and it’s now close to attaining it.

Its methods of subversion are sophisticated and run deep. FBI Director Christopher Wray said in July that the agency has nearly 2,500 open counterintelligence investigations related to China, and that the agency opens a new one about every 10 hours.

China’s rise, however, was halted and even reversed under the Trump administration, which recognized the mortal threat of the CCP to the United States. Secretary of State Mike Pompeo described the CCP as the “central threat of our times.” A nationwide effort has been underway to rid the United States of the CCP’s influence, as well as counter the Party’s aggression overseas.

Needless to say, the Chinese communist regime stands to gain a lot from an end to the Trump presidency.

A Battle Between Good and Evil

Communism teaches people to replace belief in God with atheism and materialism.

As a consequence, in today’s world, the criteria for discerning good and evil have been inverted. Righteousness is cast as wickedness and vice as compassion.

By the start of the 20th century, atheistic and anti-traditional thought had begun to gradually seep into school curricula, facilitated by leftist pedagogical experts who had infiltrated academia and held sway over educational policy.

The public is inculcated with a modern consciousness and mobilized to overpower the minority of people who stubbornly hold to tradition. Intellectuals levy heavy criticism of folk cultures around the world, fostering narrow-minded prejudice among their undiscerning audiences. The concepts of critical and creative thinking are abused to pit those of the younger generation against authority, preventing them from absorbing the knowledge and wisdom of traditional culture.

In communist countries, after the bearers of traditional culture were slaughtered, the bulk of the population was indoctrinated to participate in revolution. After the CCP seized power, it took 25 years to nurture a generation of “wolf cubs,” a Chinese term for those who grew up under communism and were indoctrinated to hate and kill class enemies. They were encouraged to fight, smash, rob, and burn indiscriminately.

In the West, communist parties proudly harken back to the experiences of the French Revolution and the Paris Commune. Every revolution and insurrection has been introduced by mobs that had no scruples, no shame, and no compassion.

Communism is a scourge on humanity. Its goal is the destruction of mankind, and its arrangements are meticulous and specific.

Human civilization, meanwhile, was transmitted to man by the divine. If humans destroy their culture and tradition, and if the morality of society collapses, then they will fail to understand the divine.

We can break through the communist specter’s attempt at destruction by actively rejecting its influence and instead following the divine, restoring our traditions, and elevating morality.

This is an era of both despair and hope.

This article was written in part based on the special editorial series “How the Specter of Communism Is Ruling Our World.” To read the series, click here.