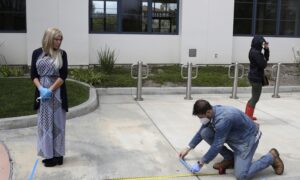 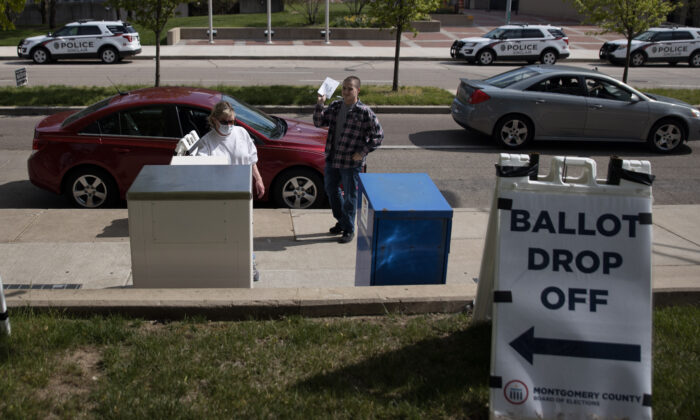 Ohio voters drop off their ballots at the Board of Elections in Dayton, Ohio, on April 28, 2020. (MEGAN JELINGER/AFP via Getty Images)
Judiciary

Activist groups are suing Ohio Secretary of State Frank LaRose in federal court over his directive implementing state law that instructs each county to offer only one drop box for absentee ballots in the upcoming November elections.

Republican Donald Trump won Ohio in 2016. Trump won 51.7 percent of the popular vote in the Buckeye State, beating Democrat Hillary Clinton, who won 43.6 percent. Ohio has 18 electoral votes out of the 270 needed to be elected president.

The lawsuit filed against LaRose, a Republican, last week in U.S. District Court in Cleveland by plaintiffs League of Women Voters of Ohio, the A. Philip Randolph Institute of Ohio, the NAACP, and 7 individual voters, claims that more drop boxes must be allowed because of reported slowdowns in processing by the U.S. mail. A similar lawsuit was filed the day before by the Ohio Democratic Party in Franklin County Common Pleas Court.

“Secretary LaRose has been and continues to be supportive of legislation that permits additional options for voters to return their absentee ballots,” a spokeswoman, Maggie Sheehan, said in a statement.

“As an executive officeholder, he must follow the law as the legislature writes it,” she said.

At the same time, he’s trying to get “the Ohio Controlling Board to permit him to pay postage on absentee ballots, effectively making every blue mailbox an absentee drop box.”

LaRose issued a directive Aug. 12 advising election officials of election-related provisions contained in H.B. 197, a bill that became law on March 27 after it was signed by Gov. Mike DeWine, a Republican.

The measure implemented changes to the primary election process, including a provision that election boards provide “a secure receptacle outside the office for the return of ballots.” The directive forbids the state’s 88 county boards of elections from locating a drop anywhere other than at the office of the county board.

LaRose’s directive required that those secure receptacles, also called drop boxes, continue to be used in the approaching general elections, and that their use be expanded to include absentee ballot application forms. It also provided security measures such as a requirement that drop boxes be monitored 24 hours 7 days a week, and that “at least one Republican and one Democratic member of the board or board staff must together retrieve the drop box’s contents at least once daily.”

The plaintiffs argue in their legal complaint filed Aug. 26 in federal court that the directive, as currently worded, infringes on the right to vote.

“At a time when the vast majority of Ohio voters are expected to vote absentee by mail this general election because of the COVID-19 pandemic, and the United States Postal Service is experiencing unprecedented delays … LaRose’s directive limiting each Ohio county to a single secure drop box for absentee applications and ballots in the 2020 election unconstitutionally burdens Plaintiffs’ right to vote. Simply put, absent immediate injunctive relief, hundreds of thousands of Ohioans stand to have their votes suppressed because of Defendant LaRose’s action depriving Ohioans of a sufficient number of secure drop boxes.”

The directive, plaintiffs say, “substantially burdens” the right to vote and forces voters into “a Hobson’s choice.”

“On the one hand, voters can risk their lives and health by voting in person so that they have more assurance that their ballots will count. On the other hand, voters have the choice to protect their lives and health by attempting to vote absentee while facing the real possibility that their ballots will not count because of an insufficient number of drop boxes and USPS delays in timely delivering absentee balloting mail.”

The League is also suing Ohio in federal court over what it claims are the state’s “flawed system of matching voter signatures on absentee ballots and absentee ballot applications.”

“Election officials—who have no handwriting-analysis expertise—are currently allowed to reject an absentee ballot or ballot application, sometimes without notifying the voter, if they think there is a signature mismatch on the voter’s paperwork,” the group stated in a July 31 press release.

“Counties also differ as to the standards they use to analyze signature matching, the procedures they follow to reject perceived mismatches, the notice they provide to voters whose applications are rejected, the opportunity they give to cure absentee ballot applications that have been rejected on the basis of signature mismatch, and the record-keeping they do to document this activity.”