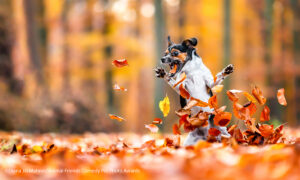 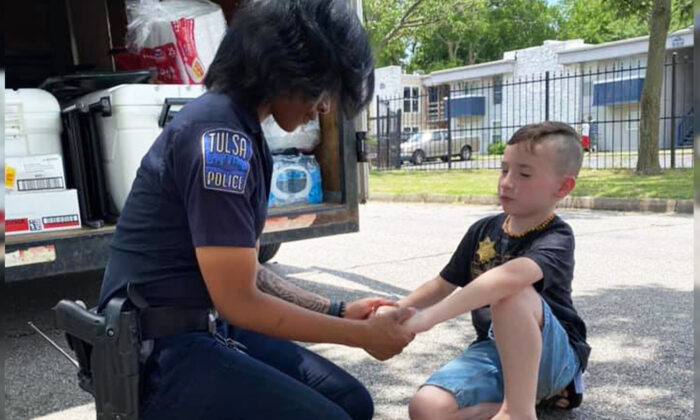 Seven-year-old Trey Elliott, from Tulsa, Oklahoma, is going viral for praying with local police officers. Photos of Trey’s mission were shared by his mother on social media and are warming hearts across the nation.

Trey’s mom, Brittany, explained that her son’s prayer mission started when the little boy learned about the protests taking place in his city in response to the death of George Floyd on May 25, 2020.

“Tulsa had a really big peaceful protest on Sunday [May 31],” Brittany told The Western Journal.

“Sunday night it turned into rioting and businesses being destroyed, busted out windows, things like that in our area,” she continued. “So, Monday I was telling Trey about it because we drive right through that area.”

Brittany and her husband, Billy, explained the difference between protesting and rioting to their 7-year-old son. After learning about the role of law enforcement in the riots, Trey told his mother that he wanted to pray for the officers.

“[It’s] a lot coming from him,” Brittany reflected, “because he does not enjoy praying out loud.”

Brittany posted the first photo of Trey praying with a police officer on Facebook on June 1. “The current state of our city breaks my heart into so many pieces,” she wrote, “[b]ut this little boy restores it every time.”

“This boy laid his little hands on officers to show them that we love and support them,” Brittany continued. “If this picture shows you anything, let it be to pray for those around you.”

The proud mom’s moving photo depicts Trey kneeling with his hand on the shoulder of Officer Donnie Ray Johnson, also bending down. Both have their eyes closed in a shared prayer.

The boy’s chosen prayer is simple and heartfelt. “God, please protect these police officers, and their families, and their city. Amen,” according to KJRH.

After Brittany’s first photo went viral, the tables turned; all of a sudden, Tulsa Police Department (TPD) officers began actively seeking out the 7-year-old at public events, and even at his own home, in order to pray with him.

TPD’s Chief Wendell Franklin, bowled over by Trey’s heartfelt gesture, took to Twitter on June 4 to comment on the effect that Trey’s movement was having on the local community.

“Trey prayed for our community, police department, and me today,” Franklin posted. “It was an honor to meet this young man involved in his own mission to bring our community together,” he added. “He is that mustard seed planted which yields a tree used by all.”

According to a Facebook post by Brittany, as of June 16, Trey has prayed with a grand total of 147 police officers and counting. According to KJRH, Trey’s goal is to pray with every single police officer at the Tulsa police department. The compassionate 7-year-old told the news outlet that any officers wishing to share a prayer are welcome to his block at any point in time.

Social media users who have come across photos of Trey praying with police officers can’t be more proud of him. Most of them expressed their gratitude for not just touching the hearts of individuals but families across the state as well with his heartwarming act.

Through his ongoing movement, Brittany told The Western Journal that “all he hopes is that other people think to pray for their own officers and their own towns.”

In the current scenario, Trey’s mother urges people to “Get outside of your own head, get off social media for a little bit, and if you see that officer at the coffee shop or at the gas station, just stop and ask them, ‘Would you be okay if I prayed over you?’”

She further reminded people that “[I]t probably means a lot more to them than you would even think.”