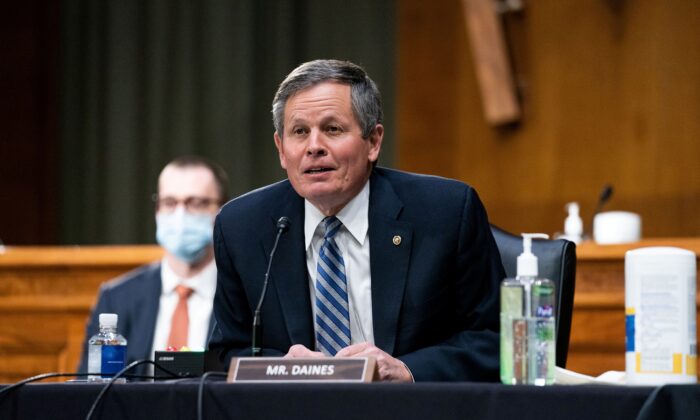 48 Senators Vow to Oppose Any Legislation That Funds Abortion

Nearly half of the U.S. Senate vowed on Feb. 5 to block any spending bills that fund abortion.

Sen. Steve Daines (R-Mont.), founder and chairman of the Senate Pro-Life Caucus, sent a letter with 47 other senators to Senate Majority Leader Chuck Schumer (D-N.Y.), promising to oppose legislation that would fund abortion without the inclusion of the Hyde Amendment or similar pro-life protections.

The amendment has been added to bills since 1976 to prevent direct taxpayer funding for abortion providers.

“We are deeply opposed to efforts to allow taxpayer funding of abortion on demand and eliminate this more than four-decade-old consensus. Instead, we urge you to allow the Senate to continue its long tradition of bipartisan cooperation in enacting annual appropriations, as well as other health-related spending, with longstanding pro-life protections intact,” the senators told Schumer, who became majority leader last month.

“Abortion is not health care; rather, it is a brutal procedure that destroys the life of an innocent unborn child. The Hyde Amendment reflects a consensus that millions of pro-life Americans who are profoundly opposed to abortion should not be coerced into paying for it or incentivizing it with their taxpayer dollars.”

President Joe Biden for decades supported the Hyde Amendment but reversed his stance in 2019.

“If I believe health care is a right, as I do, I can no longer support an amendment that makes that right dependent on someone’s ZIP code,” Biden said at the time.

The Republicans writing to Schumer this week pointed out that nearly 60 percent of Americans in a recent survey said they oppose using taxpayer dollars for abortions. They also referenced analyses that estimate over 2.4 million Americans “owe their lives” to the amendment, which saves “more than 60,000 lives every year.”

Senators are also emphasizing the view that other pro-life protections in federal law should be maintained, including prohibitions on funding for abortion and abortion coverage for the Federal Employee Health Benefits Program.

“We are united in our resolve to guard against any changes to federal law that would unsettle nearly half a century of bipartisan consensus against taxpayer funding for abortion on demand, or otherwise threaten the lives of unborn children. Accordingly, we are committed to vote against the advancement of any legislation that would eliminate or weaken the Hyde Amendment or any other current-law pro-life protections, or otherwise undermine existing federal pro-life policy,” the senators wrote.

Schumer’s office didn’t immediately respond to a request by The Epoch Times for comment. He has in the past expressed support for abortion and voted against pro-life bills such as the Born-Alive Survivors Protection Act, although the senator also has voted dozens of times for the annual funding measure that includes the Hyde Amendment.