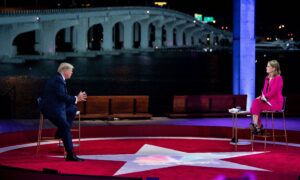 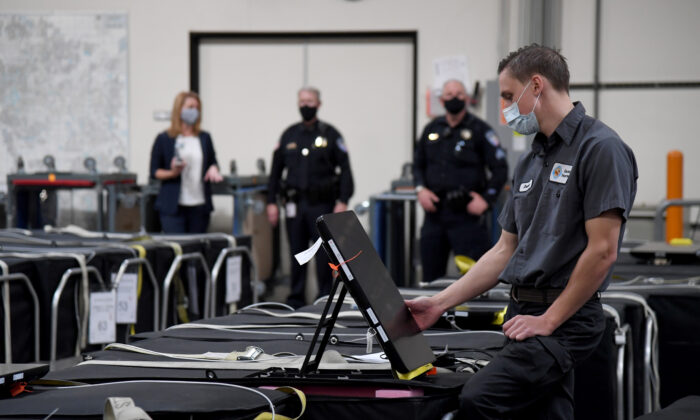 A Clark County election worker checks a voting machine among others that are boxed up at the Clark County Election Department in Las Vegas, Nev., on Nov. 6, 2020. (Ethan Miller/Getty Images)
Viewpoints

The presidential election is no casual, unimportant event. Polling shows that, today, the public’s confidence in the 2020 elections, polling, law enforcement, media, and government are largely shaken.

For that reason, the widespread claims of election irregularities and fraud should have been taken more seriously by government officials and law enforcement, and promptly and aggressively investigated. Today, there are hundreds of witnesses, declarations, sworn statements, and videos that continue to raise questions about the integrity of the results.

It’s untrue that most of the claims have been dispelled by courts. By and large, there’s been no opportunity for witnesses to testify or present evidence to a judge or jury. More importantly, perhaps, there’s been no way to collect evidence of alleged fraud without the tools of a criminal inquiry, such as subpoenas, depositions, and the ability to compel forensic exams.

If legitimate and transparent investigations were to find the witnesses who claim fraud or irregularities are mistaken or not telling the truth, the inquiries would serve the crucial purpose of assuring the public that the claims were thoroughly investigated but found to be unsupportable or false.

The following are eight examples of screaming red flags that begged for a prompt, thorough criminal inquiry.

The FBI has a role in determining whether an interstate crime occurred, and who is responsible, if hundreds of thousands of ballots were trucked from New York to Pennsylvania, as a firsthand witness states.

It should be simple for law enforcement to get to the bottom of it by finding out who hired the truck and moved the cargo, or showing that the story is made up or a misunderstanding.

There are several reported accounts of vote switching in real time, as shown on television, supposedly an example of how mischief can occur.

It would not be difficult for an investigative team to track down what happened in the specific instances and, if verified, it implicates more switching could have happened undetected.

Vote counting was oddly paused in several states. If, as some claim, it was done so that Joe Biden’s ballot deficit could be figured and erased, it would point to a coordinated effort.

It would not be difficult for criminal investigators to question decision makers at each location and find out who they communicated with. This could prove or dispel the notion of a coordinated scheme.

Fulton County is a special case since the reason given for a major vote pause, and the reason uncritically accepted and reported by many in the press, was that a water pipe burst and interrupted the count. However, the story morphed over weeks, and a state investigator ultimately concluded there was no pipe burst that would have interrupted any counting. No good public explanation for this discrepancy has been provided by a credible authority.

It would not be difficult for criminal investigators to identify and question whoever called the vote count suspension, and then moved forward with counting after some observers were dismissed.

There are widespread accounts from Republican election observers, and some Democrats, about being allegedly blocked from seeing what was going on. It would make sense for a law enforcement authority to question who was at the top of the organizational chain at each location where this is credibly claimed by a witness in a declaration or sworn statement, and find out how the official decided to determine and deploy the rules for observation.

It would not be difficult to learn whether there was a coordinated effort or, in the alternative, to hold accountable anyone at the local level who improperly shielded ballot counting from observers.

In recent testimony to the Michigan state legislature, Dominion Voting Systems’ CEO stated he saw no credible claims of fraud. But when asked how it can be proved that bad actors didn’t impact and infiltrate voting systems, he advocated the idea of audits and even machine examinations to answer those outstanding questions. He even said this is the common way such questions are answered.

For the sake of public confidence, it would be prudent to have a credible law enforcement body conduct forensic exams and audits of the machines and software to rule out interference by third parties, or any other illegalities or mischief.

Numerous witnesses from the postal service as well as at polling precincts have provided specific information about allegedly being instructed to falsely date, add birth dates, or otherwise improperly alter mail-in ballots, or have testified about hearing plans to do so. This is an important and easy issue for criminal investigative authorities to nail down one way or the other.

The midnight dumps of tens of thousands of ballots in key swing states overturning the Trump lead could be perfectly legitimate. However, it’s unusual to say the least. And so, in this environment, it’s important that a criminal investigative body conduct at least a preliminary inquiry in places where witnesses observed what they considered to be suspicious behavior or ballots.

It should not be difficult to track the chain of custody and show they’re legitimate or, if not, find out who transported them.

Finding evidence that dispels mischief is as equally important as an investigation that finds wrongdoing. The simple declaration that there’s nothing to investigate, or having people who have no way to know the truth call the claims “conspiracy theories,” is unlikely to dismiss widespread concerns and may, in fact, heighten mistrust.

Sharyl Attkisson is The New York Times bestselling author of “Stonewalled” and “The Smear,” a five-time Emmy Award winner, and the host of Sinclair’s national investigative television program “Full Measure with Sharyl Attkisson.” She is a recipient of the Edward R. Murrow Award for investigative reporting. Her newest book is “Slanted: How the News Media Taught Us to Love Censorship and Hate Journalism.”