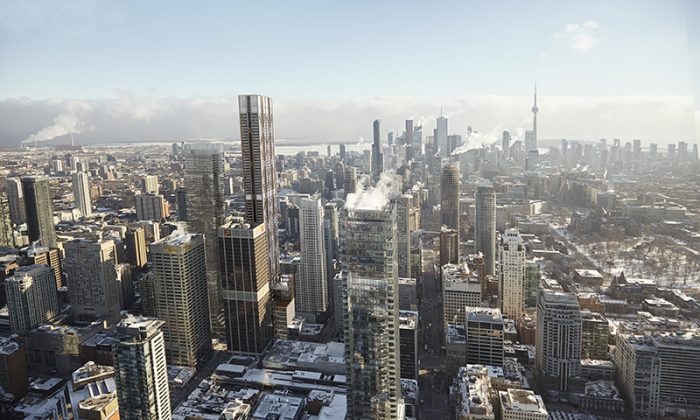 Rendering of Mizrahi Developments’ The One shows the 80-storey mixed-use building towering over everything else on the Toronto skyline. The skyscraper will be taller than the 72-storey First Canadian Place, currently the tallest building in the city. (Mizrahi Developments)
Canadian Content

Mizrahi Developments’ Audacious Plan for ‘The One’

Mizrahi Developments vice-president Mahdi Tajbakhsh knew his boutique firm would attract attention when it unveiled plans earlier this year to construct the tallest building in Toronto, a one-million-square-foot, 80-storey mixed-use mammoth on the southwest corner of Yonge and Bloor dubbed “The One.”

“But we never imagined this much,” he tells Epoch Times in an interview at Mizrahi’s Hazelton Ave. office. Tajbakhsh points to the public meeting his team voluntarily organized just before submitting its project plans to the city: the event attracted more than 350 to the Park Hyatt on Avenue Road, an overflow crowd.

What’s remarkable, he notes, is that despite the fact his company’s proposing to put up the tallest building in the city at 1 Bloor West—a $1-billion development with 70 storeys of condo units atop a nine-level luxury retail complex—the response was largely positive.

“Usually neighbours react to height and density, but nobody in that meeting said anything about the height or density of the project.”

What explains it? The way Tajbakhsh sees it, attendees were focused on the project’s more pertinent qualities: namely, its “gorgeous” design and “grand” public realm.

That design can be credited to Norman Foster, the renowned British architect who, in collaboration with local firm Core Architects, has conceived of an iconic tower which Tajbakhsh promises will put Toronto on the world map. (Foster’s other work includes London’s 30 St Mary Axe, aka “The Gherkin”; the Hearst Tower in Manhattan; and University of Toronto’s Leslie L. Dan Pharmacy Building).

The glassy tower will be wrapped top to bottom in an exoskeleton of structural steel, enabling its retail podium and upper condo levels to be left completely open, or “uncontaminated,” as Tajbakhsh puts it. This is essential, because the builder’s goal is to make the mega-project a luxury retail destination, featuring high-end international retailers not currently in Toronto who plan to establish Canadian flagships at The One.

“We’ll basically have eight jewelry boxes,” says Tajbakhsh, noting that retail spaces will have super-tall 22-foot ceilings. “So inside they can do whatever they want.”

Retail will begin on the building’s P1 concourse level, and an eight-storey podium above it will be situated around a 60-metre tall living atrium, with water features and planters throughout. There will be restaurants on the podium’s top three floors, and the bottom of the complex will have PATH connections to Yonge-Bloor subway station, and extensive underground parking.

It’s hard to discuss Mizrahi’s ambitious plans to build the tallest building in Toronto without mentioning that the firm has never actually built a tall tower before. Tajbakhsh and company founder Sam Mizrahi started out in custom homes, and moved on to develop a pair of sellout mid-rise luxury condo projects in Yorkville: 133 Hazelton (occupied) and 181 Davenport (under construction).

Tajbakhsh acknowledges the audacity of his firm going from 11 storeys to 80 in one fell swoop. “Being young sometimes helps you, because you take risks. But in this case it’s risk-reward,” he says.

“If you want to enter a highly completive real estate market like Toronto’s,” he adds, “you should have something unique, something to add, and then you have to go for it. And we’re confident this will work.”

Mizrahi’s vision is to offer the customization it’s given homeowners to retailers at The One, enabling commercial clients to dictate how their spaces are designed.

On the residential side, plans call for more than 540 condos on 70 floors, but Tajbakhsh says that number will likely be whittled down as buyers combine and customize units (133 Hazelton started with 56 units for sale and ended up with 37; 181 Davenport went from 110 units to 67).

“Based on feedback we’re getting, the moment we launch, the top floors will be gone. And people want whole floors.” (Affluent buyers from Hong Kong, South Korea and China in particular have shown interest in upper-floor product.)

The tower’s lower 40 levels will be “semi-custom” floors, with 600 to 700 square foot modules that can be combined into larger living spaces. But the top 30 floors will have fully customizable suites.

“You come to the sales centre and say you want 3,000 square feet, with two bedrooms and a library—you tell us what you want, and we’ll customize it for you,” says Tajbakhsh. “It’s a custom home.”

Registration for The One is open, but the project’s sales launch is still a ways away. “The earliest we may start is fall 2015,” Tajbakhsh says, “but realistically it’ll be spring 2016.”

Meanwhile, the project’s design continues to evolve, as Mizrahi works with the city and consults with BIAs and ratepayer groups. “We’re taking comments and revising based on the feedback” (a second public meeting is planned for May 14 at the Park Hyatt).

Toronto has great buildings, Tajbakhsh says, and more are on their way. He cites the Mirvish+Gehry Toronto development planned for King Street West, and One Bloor East, which is nearing the top of its 72 storeys right across the road from where Mizrahi’s project will rise.

But Tajbakhsh believes The One will stand as Toronto’s true new landmark, an iconic building that will attract attention from around the world.

“We see it as a gift back to the city,” he says. “Something that puts us on the international map.”