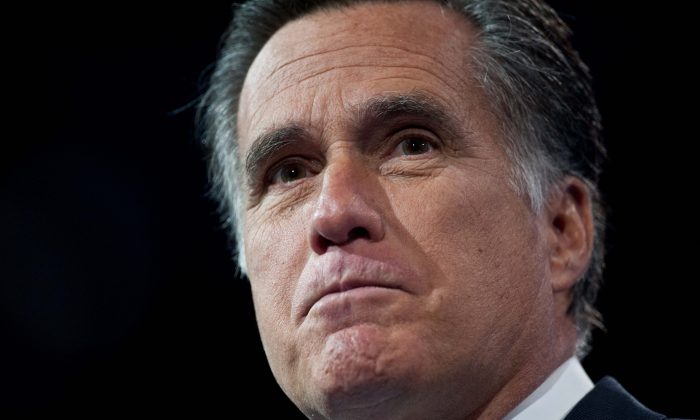 The Republican establishment is scrambling to find an alternative to Donald Trump, and on March 18 Mitt Romney became the latest to back Ted Cruz in what’s turning out to be a merry-go-round of endorsements ahead of primaries in Utah and Arizona.

On March 18, Mitt Romney announced that he was backing Ted Cruz going forward in the hopes of a contested convention:

The only path that remains to nominate a Republican rather than Mr. Trump is to have an open convention.

“The only path that remains to nominate a Republican rather than Mr. Trump is to have an open convention,” wrote Romney on his Facebook page. “At this stage, the only way we can reach an open convention is for Senator Cruz to be successful in as many of the remaining nominating elections as possible.”

To emphasize his point, Romney tweeted that he would be voting for Cruz in the Utah primaries.

This week, in the Utah nominating caucus, I will vote for Senator Ted Cruz. https://t.co/e2lAkWrt4l

Trump hit back, calling the former presidential candidate “failed” and “the man who ‘choked’ and let us all down” in a tweet of his own.

Failed presidential candidate Mitt Romney, the man who “choked” and let us all down, is now endorsing Lyin’ Ted Cruz. This is good for me!

Lindsey Graham (R-SC), who previously made a bid for president and endorsed Jeb Bush in December, came out begrudgingly for Cruz:

“He’s certainly not my preference, but he’s a reliable Republican, conservative, which I’ve had many differences with,” Graham said to CNN.

Graham said that in addition to endorsing Cruz for president he would be helping the Texas Senator fundraise for his campaign.

The confusing (and political) part about Graham’s endorsement is that it comes after years of attacking and criticizing Cruz about his work in the Senate.

Lyin’ Ted Cruz lost all five races on Tuesday-and he was just given the jinx – a Lindsey Graham endorsement. Also backed Jeb. Lindsey got 0!

Marco Rubio and The National Review

Marco Rubio—who sparred passionately with Ted Cruz in multiple debates over immigration reform—didn’t quite endorse Cruz, but has hinted that he’s going to throw his support behind the Senator.

In Minnesota, when talking to his backers, Rubio praised Cruz, calling him “the only conservative left in the race.”

Rubio’s statements came a few days after losing his home state of Florida, forcing him to drop out of the race.

The endorsements by former candidates are echoed by the influential conservative magazine The National Review, who endorsed Cruz saying:

Too many Republicans shrink from this implication of our creed. Not Cruz. And this virtue is connected to others that primary voters should keep in mind.

Whether or not any of these endorsement will help Cruz going forward is yet to be seen. As of March 18, he’s got 413 delegates, and the only path for him to the nomination is through a contested convention.