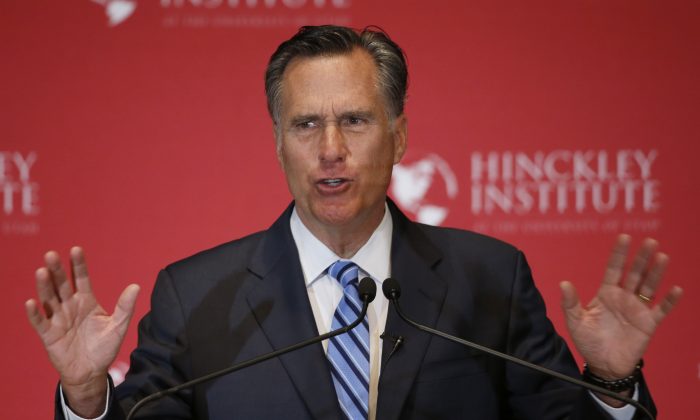 Mitt Romney gives a speech on the state of the Republican party at the Hinckley Institute of Politics on the campus of the University of Utah on March 3, 2016 in Salt Lake City, Utah. Romney spoke about Donald Trump calling him a fraud and arguing against his nomination. (George Frey/Getty Images)
Politics

Mitt Romney might be Donald Trump’s Secretary of State, according to reports on Nov. 17 from NBC News and ABC News.

But Alabama Sen. Jeff Sessions spoke with Politico, suggesting that the two will merely meet with one another at the Trump Tower, and “Romney is seen as unlikely to be a cabinet member—his outreach is regarded as more about making peace.”

A source close to the president-elect told NBC Romney and Trump will meet over the weekend to discuss a possible position. It comes months after Romney criticized Trump during the primaries, describing him as a “phony,” while Trump said Romney “choked like a dog” when he ran against President Barack Obama in 2012.

Sessions noted that the meeting is a positive sign for Trump and Romney.

“I think it’s good that the president-elect is meeting with people like Romney,” Sessions said on Thursday. “There are a lot of talented people that he needs good relationships with, and I think Mr. Romney would be quite capable of doing a number of things.”

He didn’t elaborate on the nature of the meeting.

Mitt Romney called to congratulate me on the win. Very nice!

Best wishes for our duly elected president: May his victory speech be his guide and preserving the Republic his aim.

A “senior-level source” added to ABC News that the meeting is about “mending fences.”

New York City Mayor Rudy Giuliani and South Carolina Governor Nikki Haley have been reported as possibilities for the position.