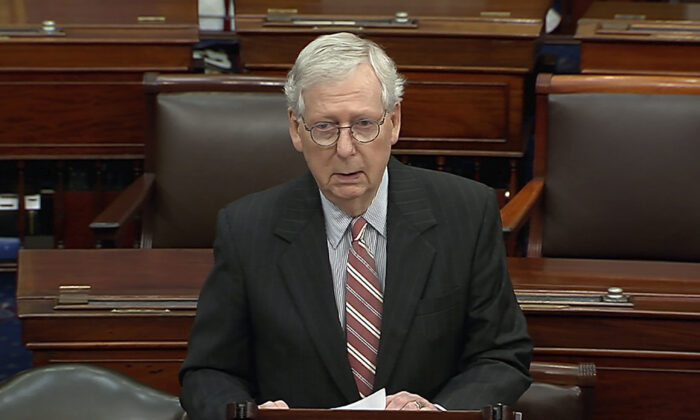 Senate Minority Leader Mitch McConnell (R-Ky.) speaks on the Senate floor at the Capitol in Washington on May 25, 2022. (Senate Television via AP)
By Jack Phillips

Senate Minority Leader Mitch McConnell (R-Ky.) acknowledged Thursday that the GOP may not retake the Senate during the November 2022 midterm elections.

Republicans need a net gain of one Senate seat to retake control of the upper chamber. Currently, the Senate stands at 50-50, with Vice President Kamala Harris serving as a tie-breaker for the Democrats.

McConnell has been cautious about Republicans taking over the Senate. In April, he said while the political environment looked like a “perfect storm” for Democrats to lose the chamber, Republicans could “screw this up.”

“In the Senate, if you look at where we have to compete in order to get into a majority, there are places that are competitive in the general election,” McConnell said. “So, you can’t nominate somebody who’s just sort of unacceptable to a broader group of people and win. We had that experience in 2010 and 2012.”

But McConnell’s comment Thursday is sure to fuel more criticism of his leadership as Senate minority leader. Previously, former President Donald Trump accused McConnell of embracing the “status quo” and “business as usual” policies.

“The Republican Party can never again be respected or strong with political ‘leaders’ like Sen. Mitch McConnell at its helm,” Trump said in a statement in early 2021. “McConnell’s dedication to business as usual, status quo policies, together with his lack of political insight, wisdom, skill, and personality, has rapidly driven him from Majority Leader to Minority Leader, and it will only get worse.”

But in a recent interview, McConnell expressed confidence that regardless of how the GOP performs in the Senate in November, he will be reelected as the leader of his caucus.

During an appearance on Fox News in early August, McConnell was asked by host Bret Baier whether he could survive a challenge by another Republican senator, ostensibly one who is backed by Trump.

“Well, look at it this way: I have been elected eight times without opposition. If I have an opponent—I don’t own this job, and there’s always an election every two years for leader—if anybody wants to challenge me, have at it,” the Kentucky Republican said in response to questions about his leadership position.

Baier then asked him, “If you don’t win the majority, are you still going to be leader?”

McConnell replied, “I am.”