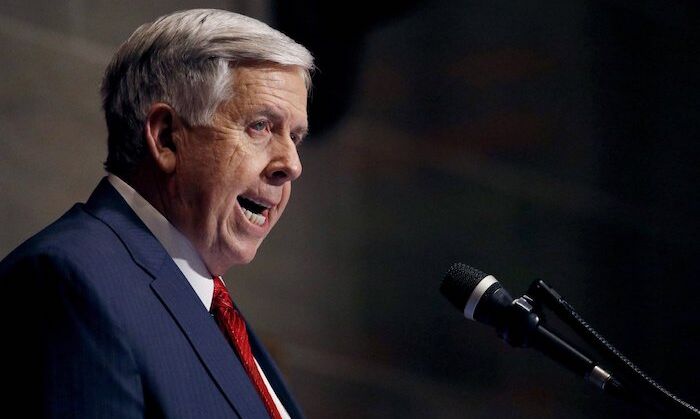 A bill banning pharmacists from querying ivermection and hydroxychloroquine for use against COVID-19 will soon arrive on Missouri Gov. Mike Parson 's desk in Jefferson City, Mo. File photo taken on May 15, 2022. (Charlie Riedel/AP Photo)
By Juliette Fairley

Juliette Fairley
Freelance reporter
Juliette Fairley is a freelance reporter for The Epoch Times and a graduate of Columbia University’s Graduate School of Journalism. Born in Chateauroux, France, and raised outside of Lackland Air Force Base in Texas, Juliette is a well-adjusted military brat. She has written for many publications across the country. Send Juliette story ideas at JulietteFairley@gmail.com
View profile
biggersmaller
Print

When Dr. Bradley Jones began treating patients with ivermectin and hydroxychloroquine during the height of pandemic, he didn’t expect to lose his position at the SSM Lake of the Ozarks walk-in health clinic.

“Not a single patient went to the hospital after we started treating them with ivermectin [and] hydroxychloroquine,” Jones told The Epoch Times.

“As I got more and more success with it, my partners started using it and then we all had success. That’s why we were growing so fast is because people were wanting treatment and if the treatment wasn’t functional, we wouldn’t have grown.”

Despite Jones’ success, on Dec.31, 2021, SSM Health St. Mary’s Hospital in Jefferson City closed the clinic where the family practitioner and his four physician associates worked.

“It was never said on their part but our belief is that the clinic was closed by the main hospital because we were treating patients with ivermectin and hydroxychloroquine and discouraging them from being vaccinated,” Jones said.

Jones has since landed a family physician position at another clinic where he continues to prescribe ivermectin and hydroxychloroquine.

“The bottom line here is what are your choices? To let someone get sicker and sicker and sicker until they die from COVID, or treat them with a safe drug that’s been prescribed forever without any complications,” he said.

Jones is among the physicians nationwide who experienced first-hand the politicization of ivermectin and hydroxychloroquine when Donald Trump was president of the United States.

“Multiple pharmacies around the lake here refused to fill the prescriptions and when I spoke to the pharmacy board, they said they couldn’t do that—and yet they did it,” Jones added.

If Missouri Gov. Mike Parson signs HB 2149 into law, pharmacists will be prohibited from disputing physicians who prescribe ivermectin and hydroxychloroquine to their patients.

“When they would prescribe these drugs, there were pharmacies that would refuse to fill the prescriptions,” said Missouri Sen. Rick Brattin (R-Harrisonville). “It turned into a big nightmare situation for the doctors.”

Sen. Brattin helped craft HB 2149 after he was approached by physicians who were on the verge of losing their licenses.

“I was on a conference call with several doctors and on that call, they were saying people were turning them in for prescribing these medications and they felt fear that if they did what they thought was right in their professional opinion, they could potentially lose their ability to practice,” Brattin said.

After being approved by the Missouri Legislature, the proposed law was delivered on May 18 to Gov. Parson who now has 45 days to sign or veto the bill, according to the Missouri Constitution.

“Our indications are the governor is probably going to sign the bill,” said Ron Fitzwater, CEO of the Missouri Pharmacy Association in Jefferson City.

“We have not lobbied hard against it. There are a lot of other pieces in that bill that we would’ve preferred that none of the language was in there because for most patients everything was going fine.”

The Missouri Pharmacy Association worked with representatives from the Missouri Board of Pharmacy and Gov. Parson’s office on the amendment during the final stages of the bill’s approval by lawmakers.

“It goes overboard saying that a pharmacist should not contact the physician in general espousing their frustrations with ivermectin,” Fitzwater told The Epoch Times.

“If they don’t want to dispense it to a patient, that’s their choice. They should just not stock it.

“If they have a good patient that comes to them that wants the script, then the pharmacist must decide if they want to risk that patient going somewhere else to get it.”

The association’s membership, which is made up of 1,800 pharmacists, first year practice members, pharmacy students and some technicians, is divided over the approval of HB 2139, according to Fitzwater.

“They’ve been livid,” he said. “We’ve gotten a lot of nasty comments. Unfortunately, this one was a political issue in addition to being a medical issue and that is always a bad combination.

Although HB 2149 modifies provisions related to professional licensing and prohibits a state licensing board from disciplining physicians who prescribe the drugs, the bill would not prevent pharmacists from discussing potential adverse reactions or mixed effects with other medications.

“We were not happy with the language, but we all had to live with what seemed to be a speeding train on the tracks, and we weren’t able to derail it other than we did get some changes in the language that we feel comfortable with,” Fitzwater added.

Juliette Fairley
Freelance reporter
Juliette Fairley is a freelance reporter for The Epoch Times and a graduate of Columbia University’s Graduate School of Journalism. Born in Chateauroux, France, and raised outside of Lackland Air Force Base in Texas, Juliette is a well-adjusted military brat. She has written for many publications across the country. Send Juliette story ideas at JulietteFairley@gmail.com