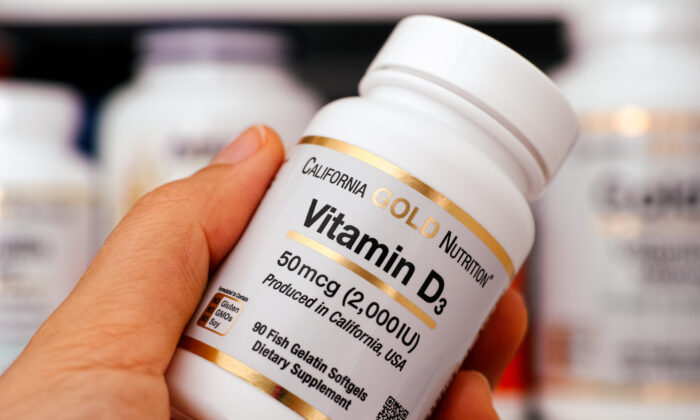 A file photo of a bottle of vitamin D3. (Ekaterina_Minaeva/Shutterstock)
By Allan Stein

A St. Louis chiropractor could face more than $500 billion in civil penalties through a federal lawsuit that alleges that he profited from selling vitamin D and zinc products in violation of the COVID-19 Consumer Protection Act.

“The federal government is suing me for half a trillion dollars … for telling people to take vitamins,” Dr. Eric Nepute said.

Nepute said his case goes to trial in Missouri federal court in March.

The Federal Trade Commission (FTC) filed the 27-page complaint in April 2021. It alleges, among other things, that Nepute profited from the online sale of vitamin D and zinc products during the COVID-19 public health emergency.

The government’s complaint alleges that Nepute, through social media and internet advertising, promoted and sold “Wellness Warrior Vita D” and other products as drugs capable of treating or preventing COVID-19.

“Starting no later than June 2020, [Nepute] began advertising a protocol that customers should follow to protect against, prevent, or treat COVID-19. This protocol, which has varied over time, advises consumers to take [daily] substantial quantities of emulsified Vitamin D3 and zinc,” found in the Wellness Warrior products, the complaint reads.

According to the suit, Nepute’s “lack of factual or scientific bases for these claims [are] frequently accompanied by equally unsupported assertions regarding applicable science.”

“In short, defendants are selling their products by disseminating information, exploiting fears [amid] a pandemic, and posting a significant risk to public health and safety,” the complaint reads.

However, the U.S. Centers for Disease Control and Prevention stated that vitamin D is “essential for bone health as well as muscle and nerve functions [and] helps the immune system fight off bacteria and viruses.”

Despite numerous settlement offers and arbitration, Nepute has rejected any out-of-court resolution and feels confident that his case is strong enough to go to trial.

“The only reason they’re coming after me—and they said this—is because I’m the first doctor they went after, and they want to set a precedent,” he said. “They said they wouldn’t stop until they had ‘blood on their sword.’ That’s literally from the FTC’s mouth.”

Nepute said his vocal stance favoring vitamin D and zinc as immune boosters—including his public distribution of 2 million tablets during the COVID-19 pandemic at no charge—drew the federal government’s attention.

At the time, the government focused on the emergency authorized use of COVID-19 vaccines as the only course of safe and effective treatment of the disease.

“The [FTC is] pushing this because it’s political,” Nepute told The Epoch Times. “I’ve spent $3.5 million defending myself. The only tactic they have is to drag this out so I can’t afford to take it to trial.”

His lawyers recently filed a motion to dismiss the government’s case on summary judgment, including more than 10 million alleged violations of the COVID-19 Consumer Protection Act of 2020 and 12 million violations of the FTC Act.

Each alleged violation carries a maximum $43,792 civil penalty for a total of more than $500 billion—”exceeding the gross domestic product of Austria, Nigeria, and all but 25 nations,” according to the motion.

Frontline attorney Tom Renz of Ohio is Nepute’s advisory counsel in the case.

“The problem with this is wrongful prosecution, in my opinion, because [Nepute] didn’t lie,” Renz told The Epoch Times. “He didn’t commit fraud. He said this would bolster your immune system, and it’s true. Both [vitamin D and zinc] are well-known mechanisms for bolstering your immune system.

“This is simply going after him because he was outspoken about using vitamin D and zinc, and he didn’t like the jab—that’s all it is. He had a big following, and they wanted to make an example out of him.

“There is no basis of law for them to go forward on this—none.”

Renz pointed to statements by Dr. Anthony Fauci, who said during an Instagram Live stream that vitamin D “does have an impact on your susceptibility to infection.”

“So I would not mind recommending—and I do it myself—taking vitamin D supplements,” Fauci said.

In September 2020, University of Chicago Medicine researchers published a report that found a link between vitamin D deficiency and COVID-19 infection.

“Vitamin D is important to the function of the immune system and vitamin D supplements have previously been shown to lower the risk of viral respiratory tract infections,” said the study’s lead author, David Meltzer, chief of hospital medicine at UChicago Medicine. “Our statistical analysis suggests this may be true for the COVID-19 infection.”

Renz said, “Anthony Fauci said you should use vitamin D. Why aren’t they suing Fauci?

“I want to know when the FTC is going after the vaccine companies and the officials promoting the lie [that COVID-19 vaccines stop transmission].

Nepute said of defending against the FTC lawsuit: “I’ve spent my entire life savings. I just sold some property. I sold a car. I’ve sold everything to defend myself. I could’ve taken a settlement and walked away, but that’s not the right thing to do.

“What I’m talking about is nothing that is rocket science. What I’ve done is repeat medical literature and provide solutions for people who didn’t feel they had a solution for anything.”