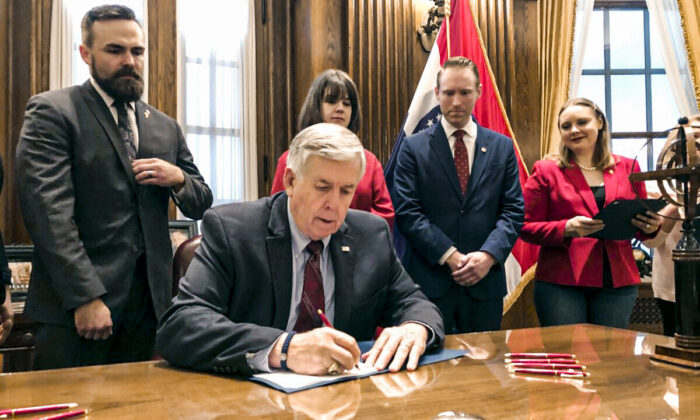 A Missouri bill that would prevent state licensing boards from disciplining doctors who prescribe ivermectin and hydroxychloroquine is now headed for Gov. Mike Parson’s desk, after the state legislature passed it by an overwhelming majority.

Sponsored by Republican state Rep. Brenda Kay Shields, state House Bill 2149 also would bar pharmacists from questioning doctors or disputing with patients regarding the use of such drugs and their efficacy.

With a convincing 130–4 vote in the House, HB 2149 passed both chambers of the Missouri General Assembly on May 12 and will now head to the Parson’s office to be potentially signed into law.

“The board shall not deny, revoke, or suspend, or otherwise take any disciplinary action against, a certificate of registration or authority, permit, or license required by this chapter for any person due to the lawful dispensing, distributing, or selling of ivermectin tablets or hydroxychloroquine sulfate tablets for human use in accordance with prescriber directions,” reads the draft of the bill (pdf).

Critics of the bill have noted that the Food and Drug Administration (FDA) has not given approval for usage of the drugs. Ivermectin and hydroxychloroquine have been divisive drugs and politically polarized throughout the pandemic.

“But, nevertheless, the Missouri legislature has chosen to ‘own the libs’ by issuing a gag order against every pharmacist in this state from offering their medical opinion on taking either one of those medications—even if it could kill their patient,” wrote former Democratic nominee Lindsey Simmons in a May 12 Twitter post.

Although 22 countries across the world have approved the use of ivermectin in treating COVID-19, the FDA maintains that the current data show the drug to be ineffective. Large doses can be dangerous, it says.

A recent study published in the International Journal of Infectious Diseases analyzed a national federated database of adults that compared ivermectin with the FDA-approved COVID-19 medication, remdesivir.

“After using propensity score matching and adjusting for potential confounders, ivermectin was associated with reduced mortality vs remdesivir,” researchers wrote. “To our knowledge, this is the largest association study of patients with COVID-19, mortality, and ivermectin.”

According to The Associated Press, Missouri state Rep. Patty Lewis, a Democrat, agreed to the bill to satisfy a group of conservatives in the Senate. She added that the bill will not change anything significantly as medical boards do not engage in punishing doctors who prescribe drugs legally.