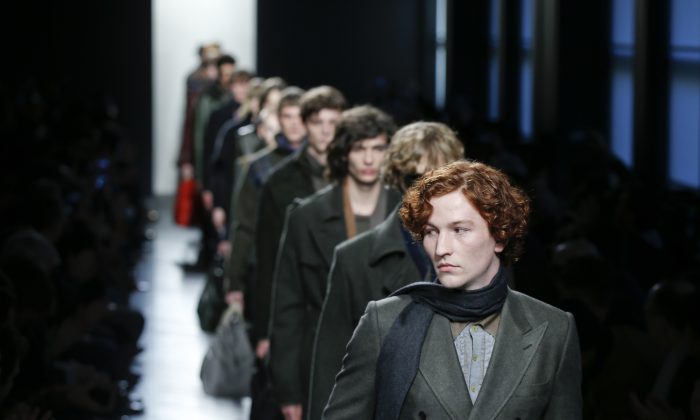 MILAN — The worlds of music, fashion and art continued their long collaboration on the menswear runways of Milan Fashion Week on Sunday.

Missoni creative director Angela Missoni says collaborations between the art world and fashion, which her father pioneered decades ago, have become ever more natural.

“There are fewer taboos between art and fashion. Today there is a mingling of all that is contemporary,” Missoni said last week at an event marking the closure of show at a contemporary art museum in nearby Gallarate, where the family business was born, exploring her parents’ artistic inspiration throughout the decades.

Some highlights from Sunday’s shows, including menswear previews for next fall and winter by Missoni, Salvatore Ferragamo, Bottega Veneta and Prada.

Angela Missoni trekked metaphorically into the Himalayas on her global search for menswear inspiration, returning with a backpack full of energy-enhancing tassels, contemplative mirrors and colors ranging from orangey sunsets to deep sky blues.

Missoni, creative director of the family-run fashion house, said the looks interpret the 1970s rock star who sought meaning in the world’s highest mountains. Models trampled dried leaves on the frigid, wind-swept outdoor runway, while the fashion crowd gratefully wrapped themselves in felt blankets left expressly on their seats.

The looks featured the fashion house’s famed knitwear adorned with tassels and mirrored details, creating a breastplate effect. The pieces were layered with heavier sweaters, sweeping blanket coats or anoraks, and worn chiefly with cargo pants, often in practical knit.

Motifs included padded circular patterns on both tops and matching trousers, creating both warmth and harmony. Backpacks and garment bags created for Missoni by Porter, the Japanese luggage and accessories maker, while Italian footwear manufacturer customized its classic hiking boot with Missoni patterns.

Miuccia Prada is taking fashion on a sea voyage back in time to explore the human condition, contemplating such present-day crises as the unrelenting flows of migrants arriving in Europe by sea.

Prada’s looks for next season are seafaring, but nothing of the jolly mariner. The mood was somber and melancholy, and also deeply romantic, as the designer said she wanted “to reflect what is happening now with what is happening in history. To see if we have something to learn.”

For the venue, her theater was transformed into a sort of town square, where people of all walks of life meet, she said.

Sturdy coats and capes, in black, navy, tan and white, had weather-worn collars and lapels, which were deconstructed and then detached.

Trousers were cropped and cuffed, footwear had leather fringe. Prada lightened the mood with printed shirts — one showing Nina Simone dancing with a Medieval knight while a Roman senator wrestles a friar, while another featured fantastical animals.

Prada topped the looks with sailor caps, and hung clusters of keys on chains at the waist and neat little square boxed purses tucked in their pockets.

As she has done in recent seasons, Prada mixed in female looks, including a few serious numbers that suggest reluctantly mourning sea widows: a snug wrapped black dress worn with argyle tights, and a calf-length dark velvet frock with a plunging neckline.

“Sometimes you feel that the history didn’t change so much, if you are pessimistic,” Prada said backstage. “I am not pessimistic. There is something to think about, something about the past.”

Color and pattern enliven Ferragamo menswear looks for the next cold weather season.

Creative director Massimiliano Giornetti made traditional houndstooth, chevron, check and plaid prints the bedrock of the collection — with black and white evolving into technicolor, not unlike the film industry of yesteryear.

He then deconstructed the patterns, and popped them with color — bold reds, oranges, russet and blues — and clashed them with modern graphic motifs, such as swimming fish, a candlestick or an arrow-pierced heart.

Scarves were the accessory of choice, worn bandanna-like over sweaters for a casual effect or knotted at the neck under a shirt collar for a more sophisticated look.

Ferragamo’s suits, double- and single-breasts, were worn with printed silken shirts with a tie out cut from the same cloth, creating a dressy camouflage. The look was sometimes finished with a contrasting silken scarf peeking from beneath the collar. The silk was so fine and the colors so calming that it never looked busy.

Overcoats were enriched with fur, shearling or velvet collars. Pants are slim and taper at the ankle to reveal the Andy Warhol-inspired paint-spattered shoe.

Amid the tweeds and wools, plaids and checks, the German designer incorporated stage-worthy statements, from velvet double-breasted suits that catch the light in burgundy and a deep peacock blue, to leather trousers with eye-catching zippers all the way down the front of the leg, silken Henley shirts with tuxedo ruffle details and long scarves, silken and woolen both, that added drama with every step.

Maier joined other Milan designers in tipping his hat to music and fashion icon David Bowie with the occasional felt brimmed chapeau to create an aura of mystery.

The overall silhouette of the collection was long and lean, something Bowie could have worn well, with pants that gently flair at the square-toed boot and elegant coat lengths below the knee. Details set the pieces apart, including diagonal buckle to close the collar on cashmere overcoats to the coated tweed wool coat that had an eye-catching sheen.

Maier said in his notes that the collection has “no tricks, nothing ostentatious. It is very discreet.”

British designer Vivienne Westwood is imploring the world to “be specific.” By that she means to be specific about what needs to be changed, part of her runway activism.

For her latest menswear preview show, Westwood added a plea to save Venice from cruise ships. To drive the point home, the invitation featured a reproduction of a painting of the canal city’s historic canals with an enormous cruise ship hulking in the background.

Westwood’s collection was nothing if not eclectic, including loose-fitting pinstriped suits, sheer open-backed sweaters, a dramatic hooded burgundy cape, and a silvery dress worn suggesting a knight’s chainmail over a turtleneck sweater.

The designer paid tribute to Bowie, playing “Starman” for the finale.