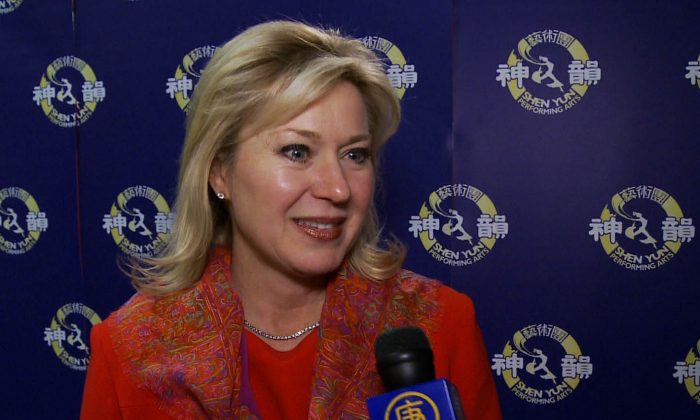 MISSISSAUGA, Canada—Mayor Bonnie Crombie took the helm of what was once “Hurricane” Hazel McCallion’s town and has also followed in her footsteps to see Shen Yun Performing Arts’ annual performance at the Living Arts Centre.

“It’s just beautiful, so graceful, so elegant, and they are so talented, the dancers. Everyone’s so beautiful too, I really enjoyed it,” said Mayor Crombie.

“The performance is exceptional. It’s precise, so well coordinated, as well as the beautiful colours,” she had said.

Shen Yun regularly sells out in Mississauga, and over the years the city has filled the Living Arts Centre to capacity.

“I really love the 3D effect with the screen. I have never seen anything like that before and I love how that is incorporated into the dance,” she said.

That screen is Shen Yun’s digitally projected backdrop. It adds vividly animated settings for each dance and musical solo, extending the range of the stage to diverse regions of China, past and present, from a Tang Dynasty pavilion to a heavenly palace.

Ms. Crombie said Shen Yun had shown her a lot about Chinese culture and she appreciated some of the deeper meanings in the performance.

“A lot about tolerance, and peace and compassion, so it was beautiful,” she said.

Shen Yun was founded on a mission to revive 5,000 years of divinely inspired Chinese culture, a heritage rooted in China’s three religions: Confucianism, Buddhism, and Taoism.

“It was just very inspirational. … I really enjoyed it,” she said.

Speaking during intermission, she spoke about one of the dances she had particularly enjoyed, The Fable of the Magic Brush.

“I just loved that one,” she said, adding that she also enjoyed the dances that included the flipping and tumbling moves that are the most technical elements of classical Chinese dance. These movements were later adopted by other art forms and are what people today know as acrobatics and gymnastics.

“It was just so graceful and so well executed. They were all very beautiful, and the soprano was just incredible too.”

Ms. Crombie said she would be encouraging others to come see Shen Yun and enjoy it for themselves.

“It’s a learning experience and a cultural experience but all so beautiful and so moving.”

Her daughter, a dancer, would also appreciate it, she said.

“My daughter she would come and she would really enjoy it,” said Ms. Crombie.