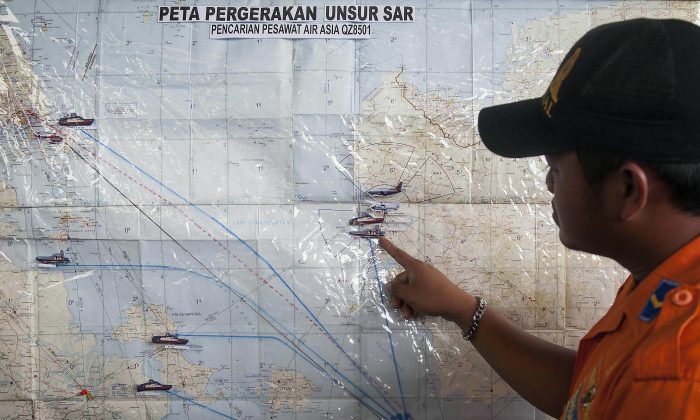 A search and rescue officer points to a co-ordination map of Indonesia at the crisis center set up by local authorities in search of the missing AirAsia flight QZ8501 at Juanda International Airport in Surabaya, East Java, Indonesia, Monday, Dec. 29, 2014. (AP Photo/Trisnadi Marjan)
Asia & Pacific

The search for missing AirAsia Flight QZ-8501 has been divided into seven different areas, according to officials on Monday.

The plane presumably disappeared over Indonesian waters on Sunday morning local time, leaving the Indonesian city of Surabaya to Singapore. About 40 minutes after it departed, air traffic control lost contact with the jet and it disappeared from radar over the Java Sea.

There has been speculation that bad weather was the cause of the accident. Strong thunderstorms were reported in the region. CBS on Monday posted an updated map, showing that the search has been divided into seven separate areas:

Earlier on Monday, AirAsia issued a statement, indicating that the search for the missing jet– which includes Indonesia, Singapore, Malaysia, and now Australia–has resumed.

“AirAsia Indonesia’s primary focus remains on the families and Sunu Widyatmoko, Chief Executive Officer of AirAsia Indonesia is currently stationed at the family centre in Surabaya. We have been keeping the families updated on the search and rescue efforts as well as provide emotional support. Another group of AirAsia officials are providing the same to the families based in Singapore,” reads a statement.

“The staff in Indonesia have been brave, strong, committed and doing 150 percent for all our guests. My pride for them is enormous,” he tweeted. “The warmth and support from the people of Indonesia has been incredible. Everywhere I go. Nothing but pure support,” he added.