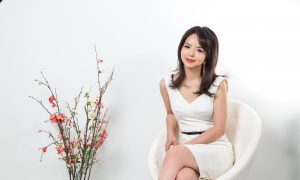 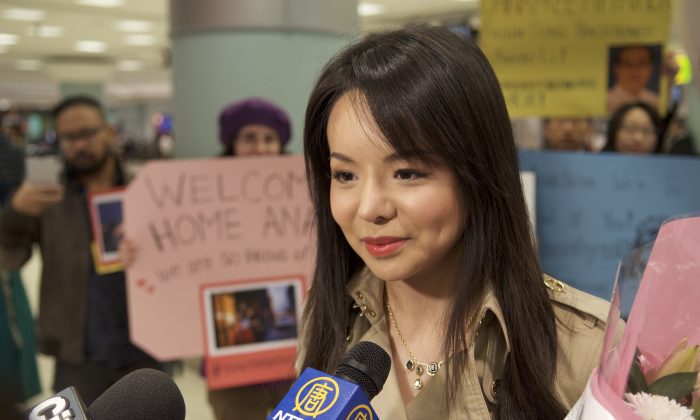 Miss World Canada Anastasia Lin returns to Canada after a week in Hong Kong and speaks to reporters at the Toronto Pearson International Airport on Dec. 3, 2015. (Matthew Little/Epoch Times)
Canada

TORONTO—Miss World Canada Anastasia Lin returned home to cheers and camera flashes after spending a week in Hong Kong, where she garnered international attention for her attempt, ultimately unsuccessful, to attend the Miss World Finals in Sanya, China.

“All Hail Queen Ana,” read one of the signs among a group of 30 or so people who turned out to greet the beauty queen at the Toronto Pearson International Airport on Dec. 3.

Speaking to reporters about her experience, Lin said she couldn’t have expected events to play out the way they did.

“I did not expect this to become an international incident, that’s for sure. When I went there, my sole purpose was really to represent Canada in the contest,” she said in an interview with the Epoch Times upon her arrival.

Lin’s turn as Miss World Canada brought more attention to the beauty pageant than it has had in years, after she went public with threats her father in China faced from Chinese security personnel who wanted him to silence his daughter.

Lin campaigned for her crown on a platform of religious freedom and human rights. She has spoken out publicly against the Communist Party’s persecution of Falun Gong and other groups in China.

“I entered the Miss World competition because their motto is beauty with a purpose. I think I stand for values that are very core to Canadians: freedom, tolerance, and diversity. That was my initial wish.”

“Of course, those values are not shared by every government. Although I am sad I am not in Sanya, the support I got from all over the world is overwhelming. I really appreciate that.”

It shows a huge pattern: that the communist government uses visas and family members as leverage to silence people outside China.
— Anastasia Lin, Miss World Canada

Lin said she hoped she would be able to slip into Sanya unnoticed on a landing visa, and that she would not be discriminated against. She said it would have even helped China’s reputation internationally.

“But I guess we overestimated them a bit. But overall I have achieved my goal, that people now know about this kind of story. Because it is not just me—my case is just the tip of the iceberg. It shows a huge pattern: that the communist government uses visas and family members as leverage to silence people outside China.”

One of the upsides to being denied entry to Sanya, said Lin, was spending a week in Hong Kong.

“People there are so warm, and they really get it. It’s because they are trying to defend their own freedom, inch by inch in their own backyard, so you can see that in them, they really treasure when someone speaks up.

“They are aware of how important, how precious freedom is,” she said.

Lin said she doesn’t have immediate plans on what to do next, but she wants to use her platform to speak up for those suffering oppression. She said the attention and crown amplify her voice, and she is now considering her options.

With all the media attention, Lin said, if people only take one thing from her many interviews, it is: “If you persist, if you stick to what you know is right, then eventually change will come.”