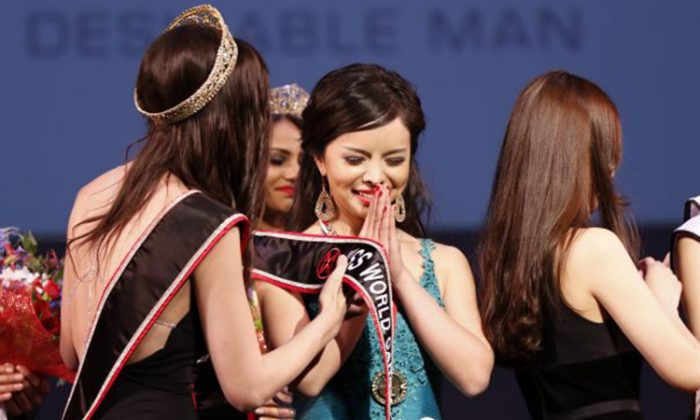 If you watched the Miss World pageant in 2015 or 2016, you might have noticed a contestant by the name of Anastasia Lin, who represented Canada. While she may be known more for her advocacy on human rights issues, do you know that she once refused to wear a swimsuit even before there was a ban on bikinis in the competition?

Anastasia Lin, born in China, had always been an extrovert. At the age of 13, she moved to Canada with her mother because her mother felt that the “western education” would be better for her than the Chinese education system. The latter “might be a little too rigid for me,” Lin explained to Maclean’s.

Before relocating to Canada, she never knew that there were human rights violations in her home country until her mother gave her information on this.

“I only knew what is being truly free after migrating to Canada,” she told The Epoch Times.

The information pertained to the persecution of Falun Gong (aka Falun Dafa)—an ancient way of self-discipline, in which assimilation to the cosmic characteristics of “Truthfulness-Compassion-Forbearance” is central to the practice.

Ever since this meditation practice was introduced to the public in May 1992, its popularity skyrocketed, primarily owing to the sheer amount of people getting their illnesses and ailments healed through practicing it.

Police began illegally kidnapping and jailing Falun Gong practitioners, who were subject to torture in an attempt to force them to give up their faith.

In light of this Communist Party-led terror, Lin told Maclean’s, “I thought, ‘The Chinese government can’t demonize and alienate them.’”

She also touched on how the very same party was responsible for the 1989 Tiananmen Square Massacre, in which 10,000 protesters were killed by the Army, who were under orders from Jiang Zemin.

The same party, in fact, is responsible for so many injustices, such as the maltreatment of Tibetans in their homeland, and the genocide of the Uygur population in northwest China’s Xinjiang region.

Lin wanted to understand what Falun Gong is all about, given that all she had heard was the Communist Party’s slanderous lies. After doing her own research, she ended up becoming a practitioner herself.

Although she became aware of the human rights catastrophe taking place in China today, the idea of exposing China’s secret genocide of Falun Gong to the world through competing in beauty pageants never occurred to her until she attended a human rights assembly at the age of 16, where she spoke with Nazanin Afshin-Jam, Miss World Canada 2003, who told her how the beauty pageant is an ideal platform to speak about issues she wants the world to know.

She later signed up to be Miss World Canada in 2013, where she was awarded second runner-up. The reason, which many believed, was because she refused to participate in the swimsuit competition.

Despite this, Lin was happy with her result.

“The organization told me I can choose not to participate, but it will greatly hurt my chances to win the crown,” she said. “I think it was the right decision.”

But why did Lin decline to take part in the competition?

“I work in a lot of TV and film projects that reveal human rights abuse and often I act in the role of a victim,” she explained.

“For my films, I have to interview a lot of people who have been sexually abused in labor camps or prison. I feel like if I expose myself in that light, for these people who look up to me as their support, this image would be counter-productive to the films.”

A year later in 2014, Julia Morley, the chairwoman of Miss World, announced that the swimsuit competition had been removed.

“But putting pressure on organizers by saying I won’t parade in my bikini has paid off,” she told Marie Claire. “This year they canceled the whole swimsuit element and I won.”

Lin went on to take part in Miss World Canada 2015 and took home the crown.

It was a great pleasure to speak to the wonderful audiences at The Heritage Foundation’s President’s Club on Monday,…

After winning, her father, who lives in China, couldn’t have been more proud of her achievement. That was until the Chinese security officers paid him a visit and began a round of intimidation.

Later, her father sent her a worrying text message that read, “You must stop what you are doing now, otherwise we will just go our separate ways,” she told The Epoch Times.

Though she was scared, she refused to back down and continued to speak out on the human rights abuses taking place in China, including the threats her father faced.

Due to her outspokenness, China refused to give Lin an invitation letter for her visa application to Sanya, Hainan Province, where the Miss World finals took place. She tried getting a flight to China via Hong Kong but was unsuccessful.

“China does not allow any persona non grata to come to China,” the Chinese Embassy in Ottawa told Globe and Mail.

Miss World organizers later gave her a second chance to participate in the finals in 2016 held in Washington D.C.

It takes courage for one to persist in standing up for what one believes is right and just, especially when withstanding pressure from a rogue foreign power.

Hats off to Lin for being able to do that!