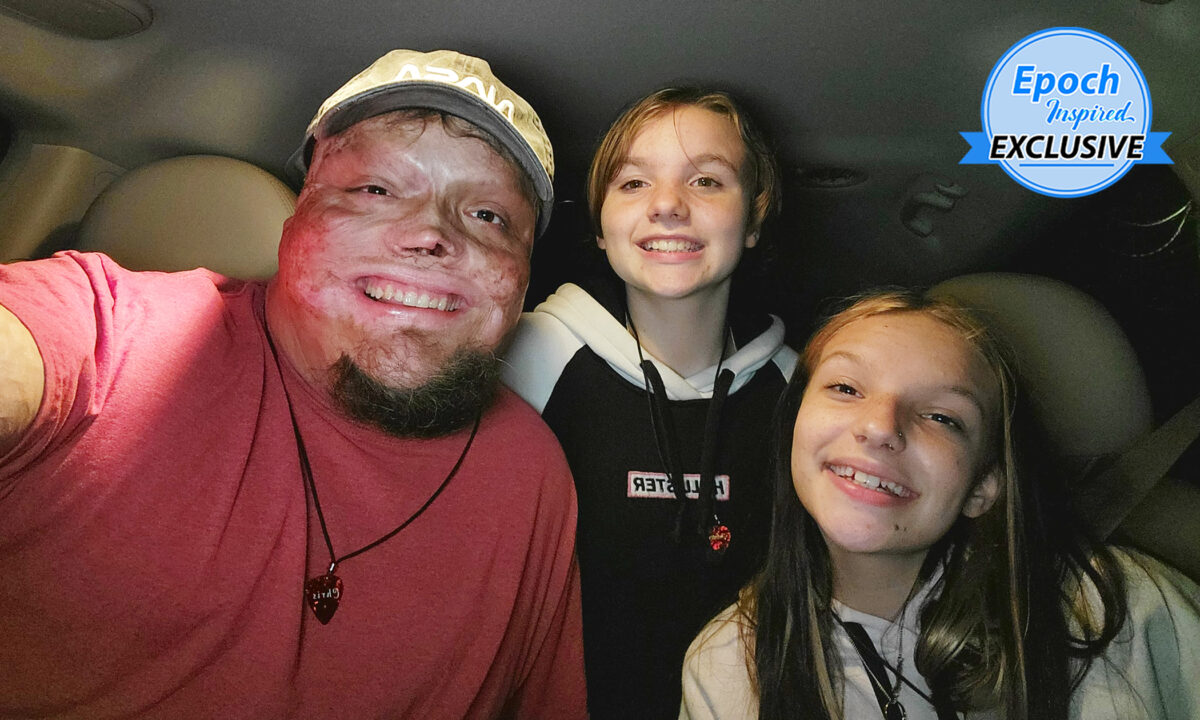 A Florida man who suffered 98 percent burns to his body in a horrific accident as a child, and was given only 1 percent chance of survival, has pulled through against the odds. He endured bullies, loneliness, and thoughts of suicide, but the love of his family and their daily prayer got him through.

Today, he’s a loving father of two and expresses his gratitude to God for everything in his life.

Chris Tomlinson, 37, was born in Florida. When he was only two months shy of his second birthday he was burned in an accidental gas explosion in his own backyard.

Sharing in detail about the incident, Chris told The Epoch Times: “I was outside playing and my mother was watching me. She turned around for a split second, and when she turned back, I was gone. I had wandered off into the utility room where we kept yard tools and such. In there was a gasoline can.”

The curious toddler then pulled the gasoline can down. It doused him and released fumes. As the hot water heater in the room came on, the pilot light ignited the fumes and gasoline, and Chris was engulfed in flames.

“My mother found me and tried pulling me out, but kept getting my skin,” he said. “Eventually she managed to grab hold of me and put me out.”

Chris’s neighbors who witnessed the tragedy that unfolded called 911 and he was then rushed by helicopter to Tampa General Hospital.

Chris’s devastated family was told he had a 1 percent chance of surviving. He was also the youngest person ever to sustain “third degree or worse” burns to 98 percent of his body. Hearing this, his family was scared and sad, but they gathered closely with friends to pray, desperate for a miracle and hoping he would survive this through.

“They depended heavily on their faith in God,” said Chris.

When Chris was 5, he and his family moved to Massachusetts where he received treatment at Shriner’s Burn Institute in Boston. However, owing to his condition, life was hard for the little boy. To this day, Chris has no idea exactly how many surgeries he had endured, but claims when he was 13 his mother “lost count at 200.”

Chris remembers little of his early recovery, but knows that he spent most of his summer breaks from school in the hospital and he wasn’t able to do most things that other kids did.

“The medicines made me feel so sick and gross, and I was more scared of that than the surgeries themselves,” he recalled. “I hated bandage changes because they always stuck to my wounds, and it was so incredibly painful to have raw flesh being pulled and exposed to the air.”

As a preteen, Chris recalls playing with his toys, trying to be a normal kid, and even though there were some mean kids who said things to him, it didn’t really bother him.

As a teen, rejection from his peers and his physical limitations started to take a toll.

“I wanted to be like the other boys, play sports, and look good,” he explained. “I was even suicidal at a few points in my teen years because I didn’t, and couldn’t, accept the way I looked. A lot of times, I hid my face in my hoodies, and I’d keep my sleeves over my hand and nub … I was too embarrassed to be seen.”

He even began to avoid people, or aisles with people in them, and didn’t attend events where teenagers were present.

Chris grew up in a faith-filled home. After attending a Christian camp called The Wilds at the age of 13, his own faith intensified and gave him comfort. Although he admits he struggled with his differences, he still had “faith in God that there is a reason it happened.”

Chris felt the hand of God again when he welcomed two daughters: Nevaeh, “Heaven” spelled backward, now 16; and Trinity, now 13. But his strength was tested once again when his wife of 14 years left him all by himself to care for the children.

He felt “horrible, abandoned, used,” and “incredibly depressed,” believing that if he looked different, his wife would not have left. He was scared to raise his kids alone, afraid he couldn’t provide for them, financially or emotionally.

Chris received SSI financial aid, but it wasn’t much, and he and his daughters had to be careful with what they spent money on, make food last, and be content with whatever little they had.

“My girls were, and are, amazing through it all, ” Chris said. “They stepped up just as I had to.”

They became independent at a younger age than most people and helped Chris with things he couldn’t physically do. They also helped him make decisions without their mother. They sought advice from their father and bolstered him when he was down, and even braved scary environments when the trio was briefly homeless.

“We’d pray together and lean on each other for support,” said Chris. “I leaned on and turned to God more than ever … I truly believe that I wouldn’t be alive without God’s help.”

As Chris learned how to parent two growing girls, his mother and sister also helped out with things he couldn’t handle. Chris then moved back to Florida in 2019.

Through the course of his life, Chris has had immense family support.

However, he has always struggled to find paid work because of the way he looks.

“My health also ties in with the lack of a job; there are some days my joint pains get so bad I’m not able to move much and need to rest, and there are some days my left hand cramps up because I have to do everything with that one hand,” he continued. “My mental health suffers as well, from PTSD, from surgeries, or from the way I was treated by some in my past.”

Nevertheless, he keeps himself busy by helping do computer and phone repairs for people in need.

Despite his lifelong hardships, what has inspired Chris is hearing how his story affects others. He’s received so many messages from strangers saying his story gives them hope that he has made it part of his journey to encourage others to find the light.

Chris has even shared a video testimony on social media, reaching thousands.

“I want to help people know that there is still hope amongst the darkness,” he told The Epoch Times. “We all go through different struggles in our lives, but we can use that to strengthen and help others.”

For those who are battling their own difficulties in life, Chris advises: “Don’t let negativity dwell in your mind and consume you; embrace your differences! There’s a reason you are that way. You have a higher calling from God to show this world that beauty isn’t the outside, but truly on the inside.”

Chris’s enduring message is that we are not alone.